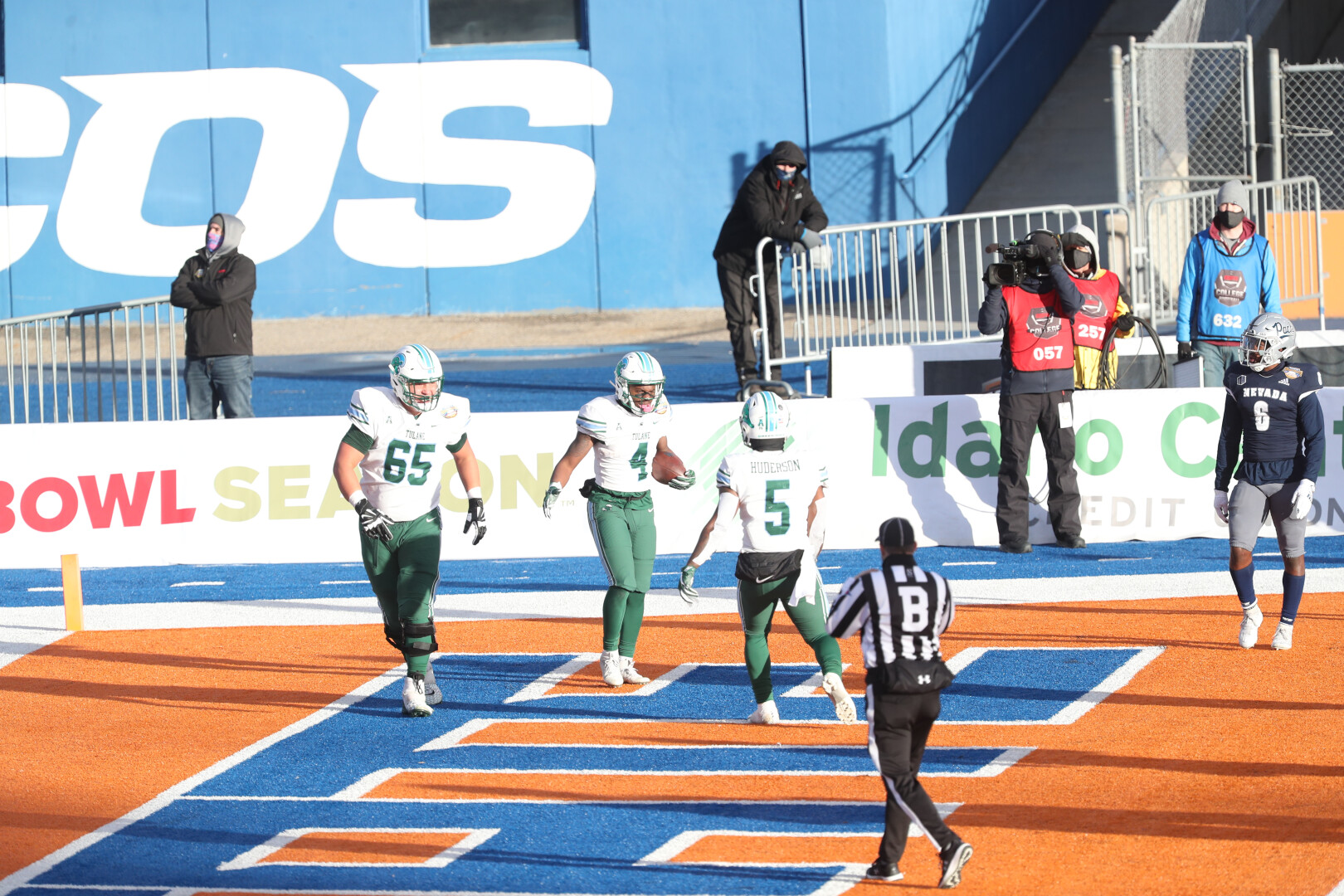 Searching for its third straight bowl game win, Tulane could not complete the hat trick on Tuesday.

Players missing on both sides of the ball, an entirely new coaching staff, and 30-degree temperatures apparently had more of an impact than Las Vegas suggested. Tulane arrived as a 2.5-point favorite.

After an impressive but ultimately inconsequential third quarter rally, the Green Wave simply could not overcome the obstacles in front of them. Nevada left with a 38-27 victory.

Nevada successfully redeemed itself for losing three Potato Bowl appearances. The Wolf Pack convincingly won against a Tulane team that has seen its fair share of disappointing finishes in 2020.

We break it down:

As mentioned in our preview, we expected a slow start on offense for Tulane. By the second quarter however, the Green Wave were expected to click.

There was certainly a slow start. Unfortunately for Tulane, the offense never showed any semblance of consistency for the rest of the contest. The third quarter was the lone bright spot.

Tulane entered the second half down 26-7. On the Wave’s first drive after halftime, quarterback Michael Pratt was able to score a touchdown on the ground bringing the Wave within 13. Pratt was then able to connect with Jha’Quan Jackson for a second touchdown to narrow Nevada’s lead to 26-20.

A missed field goal by Nevada allowed the Wave to take over at their own 21-yard-line. Needing a touchdown to take the lead for the first time, Pratt was picked off for a third time just three plays later. That allowed Nevada to score shortly after and regain control of the contest.

A combination of factors contributed to this sputtering offensive performance. The cold weather certainly played a huge role. One could clearly see Pratt trying to keep his hands warm whenever the camera panned to him along with other Tulane players rubbing their hands together and hopping up and down on the sidelines to stay toasty. A team that plays in an environment no cooler than a wine fridge is not going to be able to properly adjust to a huge temperature drop in mere hours.

Maybe “woes” is too light a word. The word “implosion” is a more honest description of how the offensive line performed.

To give some perspective, Nevada had 15 sacks in eight games this season. On Tuesday, Nevada’s front seven sacked Pratt an abysmal EIGHT times. In one game, Nevada increased its season sack total by more than 50%.

At one point in the fourth quarter, Pratt was sacked on three consecutive plays. That left the Green Wave with a 4th-and-34 situation that put them well out of field goal range.

Effort was not to blame, but this position group was tattered with injuries to begin with. 4-year veteran Joey Claybrook going down in the third quarter didn’t help matters.

This left mostly inexperienced and young lineman to protect Pratt; that wasn’t going to fly against a Nevada defense that had been (mostly) containing him all game long.

The future is bright for this position, and there’s no reason to believe this game is a glimpse of what’s to come next year. Hopefully, a full offseason of unhindered conditioning and practice will get this unit back into shape for 2021.

If this game wasn’t a perfect summary of the Wave’s defense in 2020, nothing is. Despite a tremendous amount of talented guys on the roster, Tulane can never seem to stop the pass. Allowing five touchdowns through the air and 9.7 yards per attempt is going to make it difficult for any team to come from behind.

To add insult to injury, three of Nevada quarterback Carson Strong’s five passing touchdowns came from 20 or more yards out. One of these was on a flea flicker to an uncovered Toa Taua, who took it into the end zone from 44 yards out.

Passing defense aside, another frustrating trend for Tulane has been allowing the opponent to make clutch plays in long yardage situations. On its very first possession, Nevada was able to get itself out of a 3rd-and-22 situation. The drive would ultimately end with a goal line stop. Still, the Tulane defense was on the field longer than it needed to be.

To the defense’s credit, the Wave were missing three key contributors to the defensive side of the ball. Defensive end Cam Sample, defensive end Patrick Johnson, and nose tackle De’Andre Williams were all out. All on top of that, they had to play without defensive coordinator Jack Curtis. He was let go from the program nearly a week ago.

This left much of the Wave’s front seven in the hands of freshman players like Angelo Williams and Eric Hicks Jr. The youngsters did a fantastic job in their absence, but this game still showed that these young men have some big shoes to fill. Fortunately, they appear to have very bright futures.

A Bright Future During a Not-So-Bright Year

While this loss hurts like any other loss, it doesn’t even crack into the top three most disappointing losses for the Green Wave in 2020. Blowing a 24-0 lead to Navy, losing in heartbreaking fashion in overtime to Tulsa, and losing by 18 to Houston despite forcing five turnovers were all more gut-wrenching losses than this one. With the exception of the Potato Bowl, Tulane led in every game this season.

While this provides for very entertaining football, it is absolutely soul-crushing for the fans who have watched the program come this far under head coach Willie Fritz. The 6-6 campaign could have very well been 8-4, even 9-3 if the Wave had been able to preserve a lead and play four quarters of football every Saturday. In the words of the great Jim Mora, “coulda, woulda, shoulda” ain’t going to cut it.

Despite all that, we’ve seen glimpses into the future of what this program can (and should) be. The burgeoning Pratt will be able to enter his sophomore year alongside an offensive coordinator who helped develop talented quarterbacks like Riley Ferguson and Ian Book.

The defense, while losing many vets to graduation and surely the NFL, is in the young and capable hands of several talented freshmen. The running back room, despite losing key contributors Stephon Huderson and Amare Jones, should again be talented. Redshirt senior Corey Dauphine and redshirt freshman Tyjae Spears will each return from injury. Redshirt sophomore Cam Carroll is also expected back after rushing for 12 touchdowns.

It’s hard not to be very proud of all the players who have provided fans with years of competitive football and Green Wave esprit de corps. Many will do great things moving forward.

As for Tulane, the focus can now turn to the spring. After that, Oklahoma comes to Yulman Stadium.