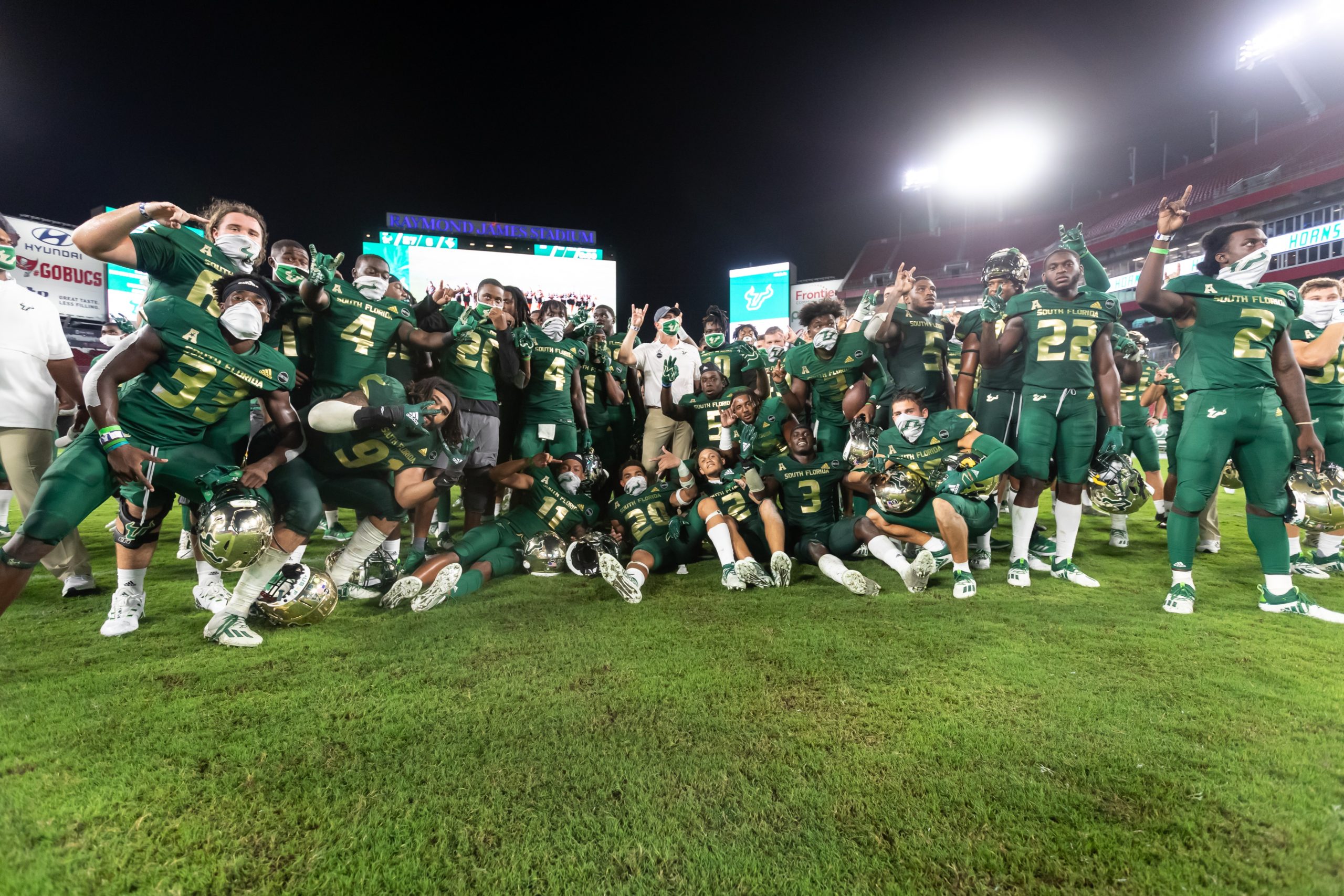 On Saturday, South Florida football took the field after what seemed like one of the longest offseasons fans have ever endured.

Not only did the program undergo coaching changes from top to bottom, but it also had to adapt to the post-COVID-19 college football environment. In a year where USF made one of its most drastic changes, it was presented with its most unique challenge. It’s easy to imagine how previous coaching staffs would have folded under these circumstances.

Jeff Scott, however, has met these challenges head on in his first year as a head coach. No USF head coach has made discipline and accountability a priority like Coach Scott. In a year where COVID-19 has changed the landscape of college football, the Bulls have shown these traits with no major outbreaks over the summer. The results showed themselves in Scott’s first game at the helm as USF took an efficient 27-6 win over The Citadel.

Perhaps the biggest question facing the team to start the season was who would start at quarterback. In the offseason, the quarterback room got a couple new faces: Alcorn State grad transfer Noah Johnson, and North Carolina transfer Cade Fortin. Ultimately, Scott decided to give sophomore Jordan McCloud the nod for Week 1.

McCloud had a decent showing with a 69% completion rate, 68 yards, and a touchdown through the air. He gained only three yards on the ground. Additionally, Johnson still received a fair share of snaps throughout the game.

Johnson was McCloud’s polar opposite. The former SWAC Offensive Player of the Year had only 24 yards passing, with 49 yards and a touchdown on the ground. The way they were used makes one wonder if we could see a “running quarterback” and “passing quarterback” setup until Scott gets a better feel for the team. 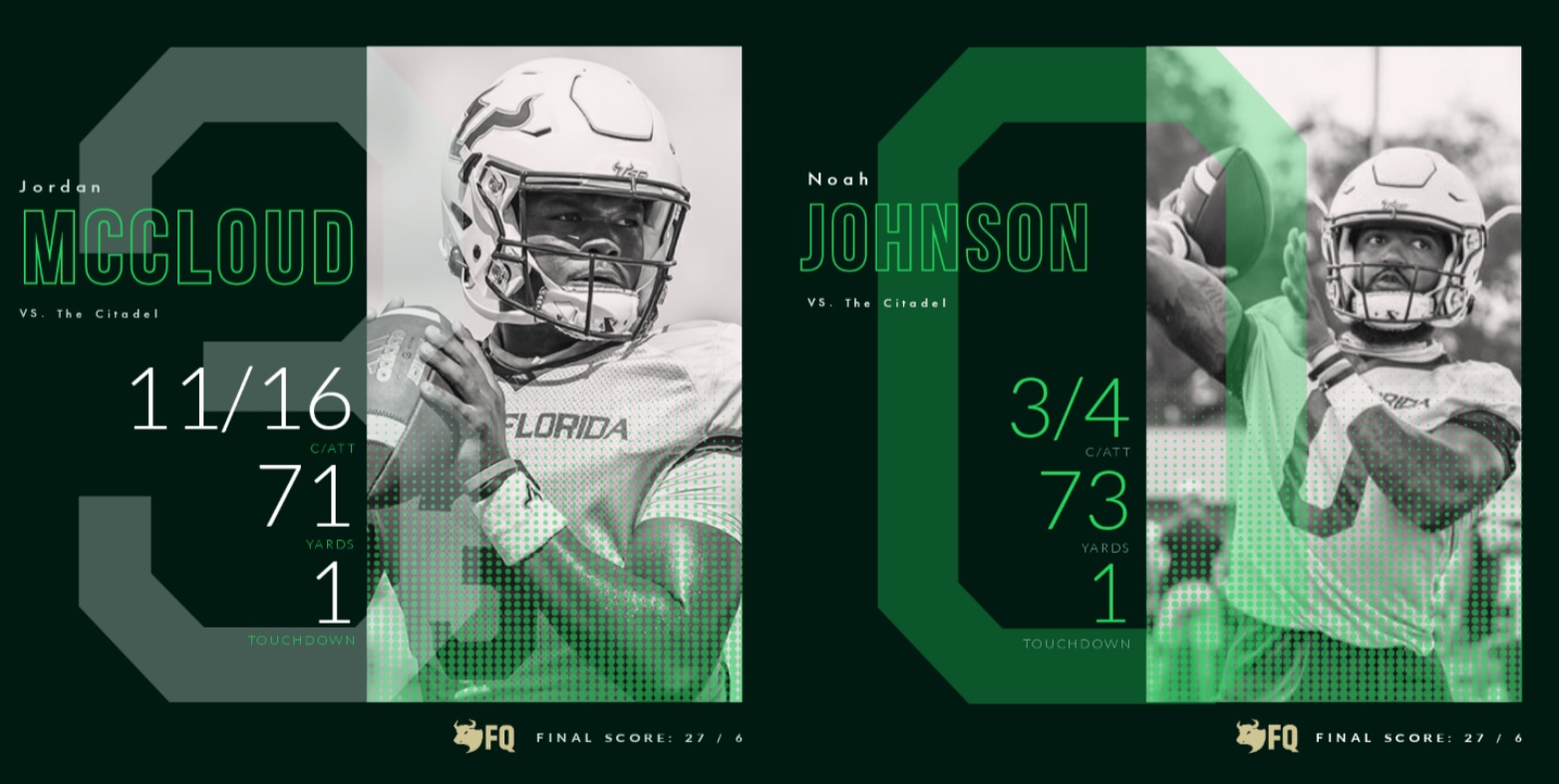 Overall, quarterback play was strong from both players. That is nice to see with three offensive line starters out, but there is only so much one can get from a Week 1 performance against an FCS team.

USF has three straight road games against teams that had 11 wins in 2019 next. Any judgement on a permanent starter should be reserved for those games. This week’s performance was more about the offense as a whole rather than either individual quarterback.

After years of Charlie Strong and Sterlin Gilbert’s sluggish offensive scheme, this game was a sight for sore eyes. The Bulls’ 27 points was the first time USF has hit the 20-point mark since Week 8 of 2019 with a 45-20 win over East Carolina.

After other teams in The American struggled last week, it was easy to believe the offense would come out flat once again. The Bulls pleasantly surprised. The team totaled 302 rushing yards and 102 passing yards. As a team USF averaged and efficient 7.7 yards per carry.

It’s nice to see the offense put some points on the board. For the past few years, USF’s offense has been its biggest weakness by far. This is a good starting point to get back on track. With time, it should only get better.

With two top-25 teams on the horizon, it would be surprising to see Scott show even a quarter of his playbook. In this game, it was most important that the offense just look better than where it left off in 2019 — so far, so good.

Out of the gate, the USF defense struggled. Early in the game, it gave up a few third-down conversions, and allowed The Citadel to take an early 3-0 lead. But as the game went on, USF’s defense solidified.

The Bulls have had issues with the triple-option in the past, but did a good job shutting down The Citadel. It was good practice for Navy later in the year, which now looks like a winnable game. This was a big step forward for the defensive unit. The last time USF didn’t allow a touchdown was Oct. 14, 2017 in a 33-3 win against Cincinnati.

On special teams, it’s easy to talk about the amazing 0-yard punt return. That was a spectacular play, but it was a gift. When assessing the performance on special teams, missed kicks is the bigger issue.

The one big problem area in this game was the placekicking unit. A missed extra point and a badly missed 43-yard field goal are red flags.

The blame is not solely on Spencer Shrader. On the missed extra point, it was surprising that he could even get the kick off with the bad snap. The entire unit will need to get it together because multiple missed kicks can and will lose a game.

The lack of penalties in this game was the biggest difference so far between Strong’s Bulls and Scott’s Bulls. The 2020 edition of USF football is well-coached and very disciplined.

USF only took five penalties for 50 yards the entire game. If the team can keep this up, it will show up on the scoreboard. Less drives starting with bad field position, and less momentum-killing mistakes is a recipe for success.

Overall, this win gave Bulls fans a lot of hope. USF even received six AP top 25 votes Sunday morning. Next up is No. 7 Notre Dame.

This will be a tough game, especially on the road. It’ll be exciting to see what Coach Scott draws up on offense for such a big game.

Scott got his first win out of the way early. Now, expect this team to evolve in a major way as the season continues. For the next three weeks — win or lose — USF fans should just want to see continued improvement in all phases.