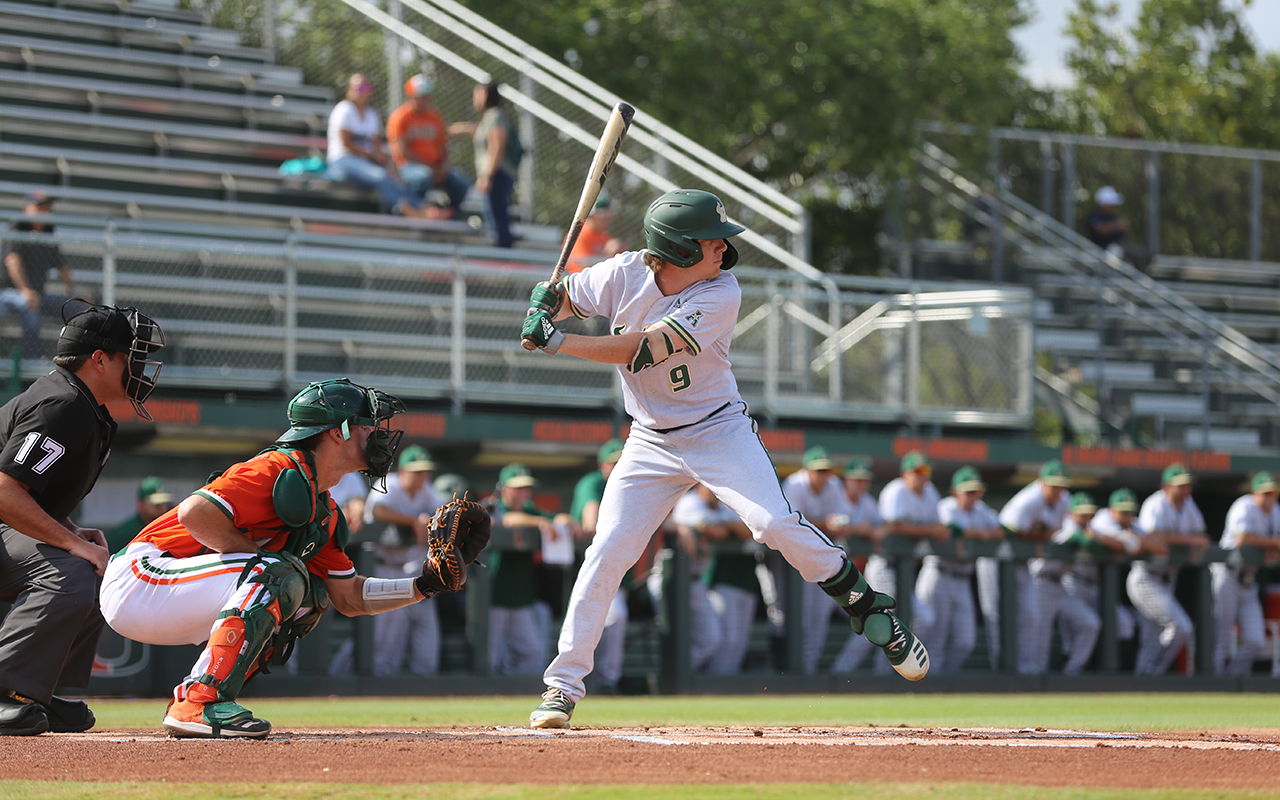 Coming into the 2020 season, South Florida had a young roster with a lot of uncertainty. There were several questions this team needed to answer. Could anyone in the order step up for big offensive losses? How would high profile freshmen like Jack Jasiak and Orion Kerkering do on the mound? Would 2019 injuries continue to affect the team?

Unfortunately, with the cancellation of the season in March, we never got a good answer to many of these questions. It’s hard to take much away from a team with 18 underclassmen on the roster that only played 17 games. There was a ton of time left for this team to work out its issues, but the end of the season came before we even hit conference play. Sadly, we’ll never get to see what the finished product would have looked like. You have to wonder, was this team capable of making a run in conference play? We’ll attempt to answer that question using stats and metrics from the small sample we did get to see this year.

First, the most obvious and important metric is the teams overall record. The Bulls were 6-11 when the season ended, which was good for dead last in The American Conference. Five games under .500 in non-conference play is clearly less than ideal, but there is important context that comes along with this record. The first thing to consider is that the Bulls’ roster was made up of 18 freshmen and sophomores. There were nights this season where over two-thirds of the lineup were underclassmen. It’s easy to see how this team could struggle early in the season. Not only had a lot of these players never played together, several starters had never even played baseball at the college level.

Additionally, it is important to take into account the brutal early-season schedule. In the first month of the season, USF had to go on the road and face Florida State, who was No. 12 at the time, and Miami who was No. 7, in midweek match-ups. Then the Bulls had to make the trip up to Gainesville to take on the No. 1 and undefeated Florida Gators. That would have been a gauntlet for Vanderbilt, let alone a USF squad replacing some of its most important hitters with freshmen, and still recovering from 2019 injuries on the mound.

The first thing we can look at on offense is the team’s batting average, which was not great. Over the 17-game season, the Bulls hit .189 as a team. When the team is hitting below .200, that’s a very bad sign. This is a surface-level indicator that USF was not a very good hitting team in the games that were played. Compare USF’s average with other teams in the conference: Tulane hit .303, Cincinnati hit .288, and UCF hit .279 for example. USF was the only team in the conference to hit below .200. Batting average alone can sometimes be a bit misleading however, so its important to not stop there.

If you’re looking for a single statistic that gives a good indication of hitting performance, on-base plus slugging (OPS) is that stat. OPS shows an ability to get on base and hit for power — two of the most important offensive skills. It rewards hitters that get on base a lot and rack up total bases with extra base hits. But what is a good OPS? Let’s compare USF’s team OPS of 0.544 with Tulane, who had the highest OPS in the conference at 0.894. That big of a difference is not good, and this is reflected in each team’s hitting totals:

This tells us that the Bulls were not good at getting on base and accruing extra bases compared to other teams in The American. The chart below shows just how far USF was behind the AAC in team OPS. 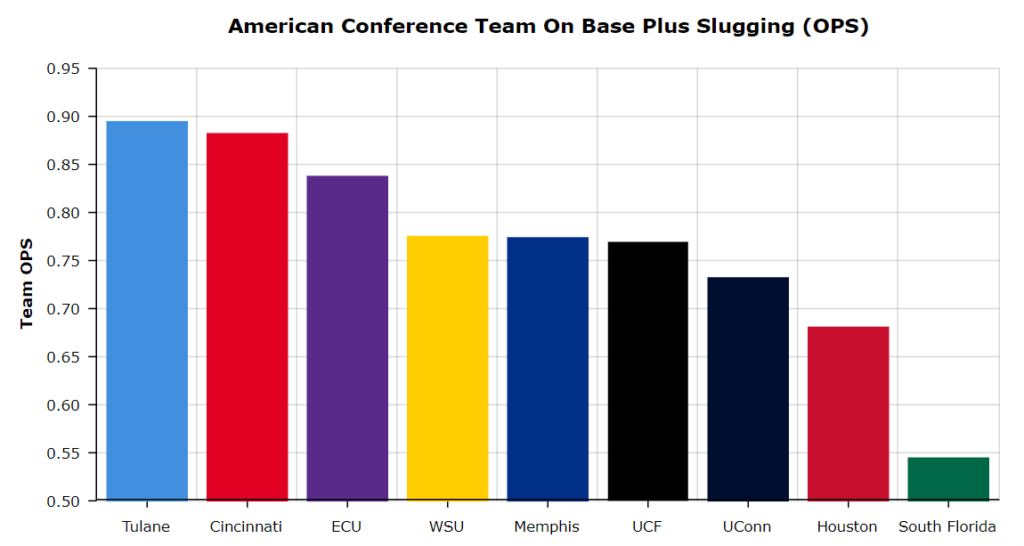 Another important metric to look at is strikeouts. This can tell you a lot about the team’s hitting ability. If a team strikes out at a high rate, it shows a lack of skills like plate vision and discipline, or poor contact on the ball. Bulls’ batters struck out 159 times this season — the most in The American. Below is a chart of every plate appearance by USF and by Tulane, who had the highest OPS in the conference. USF struck out in almost 25 percent of its plate appearances this season. If you were to give the team a “strikeout average” it would be considerably higher than their batting average at .289. Tulane, on the other hand, struck out less, drew walks more, and got more of each type of hit. What Tulane did better than USF was plate discipline and putting the ball in play.

The takeaway from from this is that the Bulls had some issues at the plate this season, which is why the team had a -32 run differential. Outside of individual performers like Dontae Mitchell and Jordan Santos, who drew a respectable 11 walks each, the team as a whole struggled to get on base. They also struggled to get hits in the clutch, which can help explain the lack of run production. 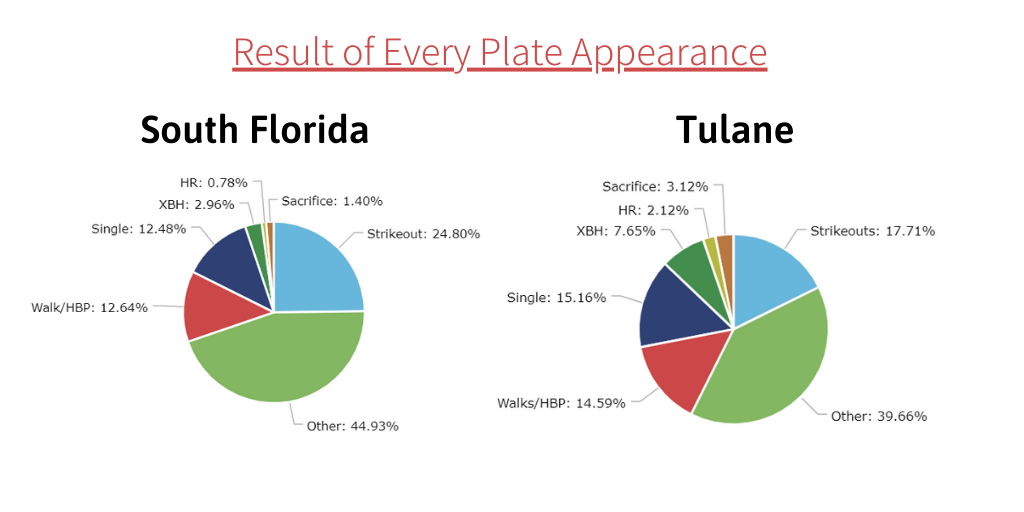 It’s a bit more complicated than just being bad at hitting though. This type of performance shouldn’t be too surprising in the first 17 games of the college baseball for several key betters. Not to mention five of those 17 games were on the road against top-15 schools. Who knows how the lineup would’ve fared when conference play began. The bats were starting to heat up during the series against Northwestern, and they did score 12 runs on a decent Pittsburgh team two days before the season was cancelled. It’s not unrealistic to think the team could bring its strikeout rate down once it had more time to settle in and figure it out. 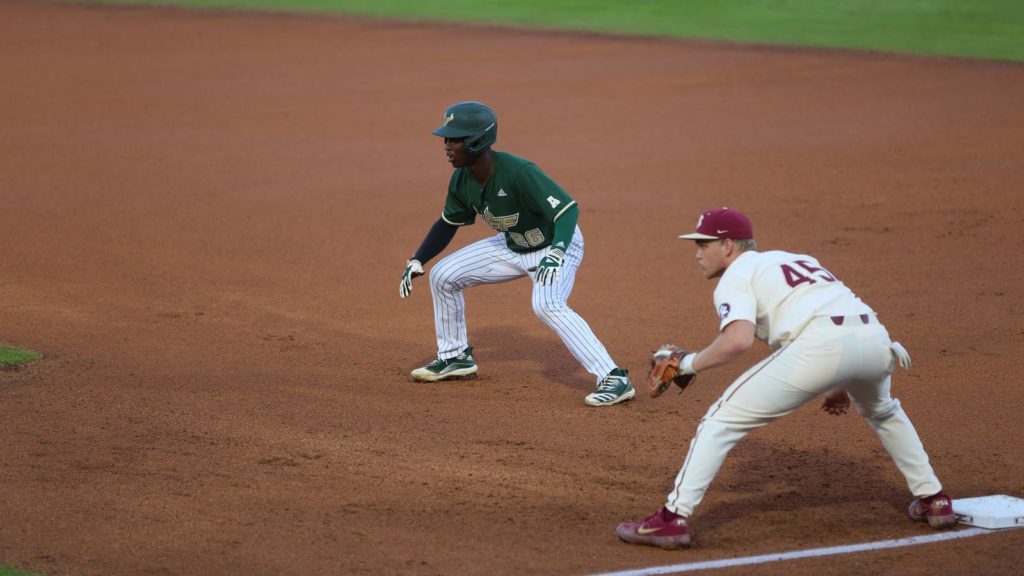 Statistically, South Florida was the worst hitting team in The American and one of the worst in the country. In the second part of a 2-part series, we’ll examine how the Bulls fared on the mound.