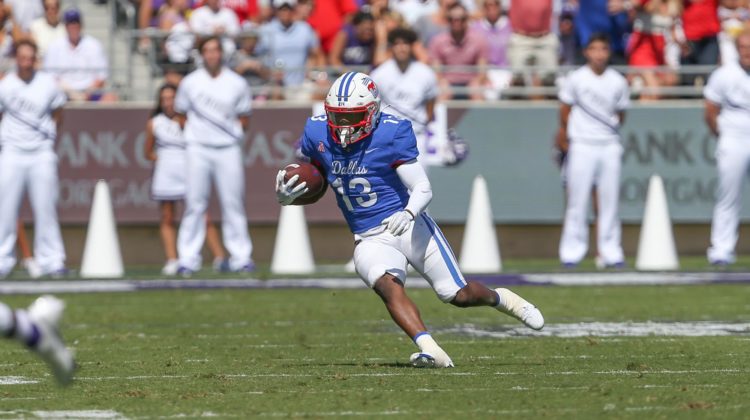 The end result of this article is that basically nothing is different from Oct. 2, except most people who do not follow SMU and only look at the headlines will not realize that little has changed.

Reported by Joe Hoyt of the Dallas Morning News, three Mustangs are back with the team. Wide receivers Roderick Daniels Jr. and Jayleen Record, as well as safety Isaiah Nwokobia, are back.

News for SMU: WR Roderick Daniels Jr., one of the players sources indicated last week would sit out the rest of the season and transfer, is back at practice. WR Jayleen Record and S Isaiah Nwokobia are also at practice.

Don’t see veteran S Chace Cromartie is not at practice.

So why is the fact that some Mustangs were practicing at a Mustangs practice newsworthy of writing an article?

On Oct. 3, a tweet from Hoyt went semi-viral in college football circles.

For what it’s worth, it was a well-written story and there is no evidence of any of the information being wrongly reported.

A development in a new era of college football.

Multiple SMU players plan to sit out the rest of season with intention to preserve their redshirt year and enter the transfer portal, multiple SMU staff members with knowledge of the situation said.https://t.co/lCGlyKJz90

It was originally reported a day earlier by On3’s Billy Embody, on the On The Pony Express On3 fan site.

Despite Hoyt’s response the following day, people who had little to say about SMU read the headline and felt like sharing their feelings on the situation.

For those who didn’t read the story:

1) This isn’t cause for concern at SMU.
2) These are players trying to find the best situation for themselves, and coaches at SMU support that.
3) Read the story and more than just the headline https://t.co/uHQpP28wpi

The most trusted name in news, BroBible, did not mince words in their tweet and headline.

This is a brutal blow for SMU https://t.co/MrAUzEy4PW

Most people would not consider a scout team receiver, an up-and-coming receiver who will likely take on an expanded role starting in 2023, a young safety with a lot of potential, and a fifth-year role player to be key players. But, then again, it’s unlikely that BroBible did the requisite research to know the full situation before posting a sensational headline to their modest follower base of 138,000.

Not to be outdone, Darren Rovell had something to say. Apparently NIL was to blame for this, according to Rovell. At the time of writing, it has only been a couple hours since the news broke that the players have returned to practicing for SMU. Rovell has yet to issue a retraction to his 1.9 million followers.

First came players sitting out bowl games to ensure the didn’t get hurt and lower their draft potential.

Here’s what is next in the NIL era. Players starting to sit out to he healthy for the transfer portal.

Expect this to happen at Miami, Houston and Michigan State. pic.twitter.com/yV6P6wJwJI

Also, Rovell’s blaming of NIL feels misguided, to put it diplomatically. The Boulevard Collective has deals worth $36,000 per year with every scholarship player, plus the Pony Sports DTX collective had already announced a 10-month deal for an undisclosed amount with Daniels.

Two of the four athletes have not gotten snaps in non-garbage time all season. Rovell clearly misunderstands the NIL landscape if he thinks that they could be getting more than $36,000 on the open market.

Despite a string of tough losses, SMU fans were quick to defend the program. Fans rallied around the fact that this was, on the whole, a non-story even before it largely became a moot point.

Record even had something to say to everyone that had drawn conclusions. In hindsight, this is an interesting tweet given the result of the situation.

As pointed out by Tom Fornelli in a recent episode of CBS Sports’ Cover 3 podcast, this news did not change the spread prior to the UCF game. Credit Fornelli for having done his research on the players who announced they’d be entering the portal.

Looking at most replies to the above mentioned tweets, it was clear that Mustang fans understood the situation.

The unfortunate truth is that not many other college football fans understood the situation. A headline was read, and conclusions were drawn. This can have a damaging impact on a locker room and a program.

Several people responded with some variation of, “I haven’t read the story yet, but is everything OK? It sounds like Coach (Rhett) Lashlee might have lost the locker room.” But any response given — even the truth — sounded like it was an SMU fan trying to salvage a season and justify a coaching hire by clinging to a combination of optimism and denial.

The players are now back with the team and the original article is moot. But this is going to be a storyline going forward. Future issues are going to be seen through the lens of confirmation bias now that the idea of problems are out there.

Settle down. Read the whole story. Understand the context.