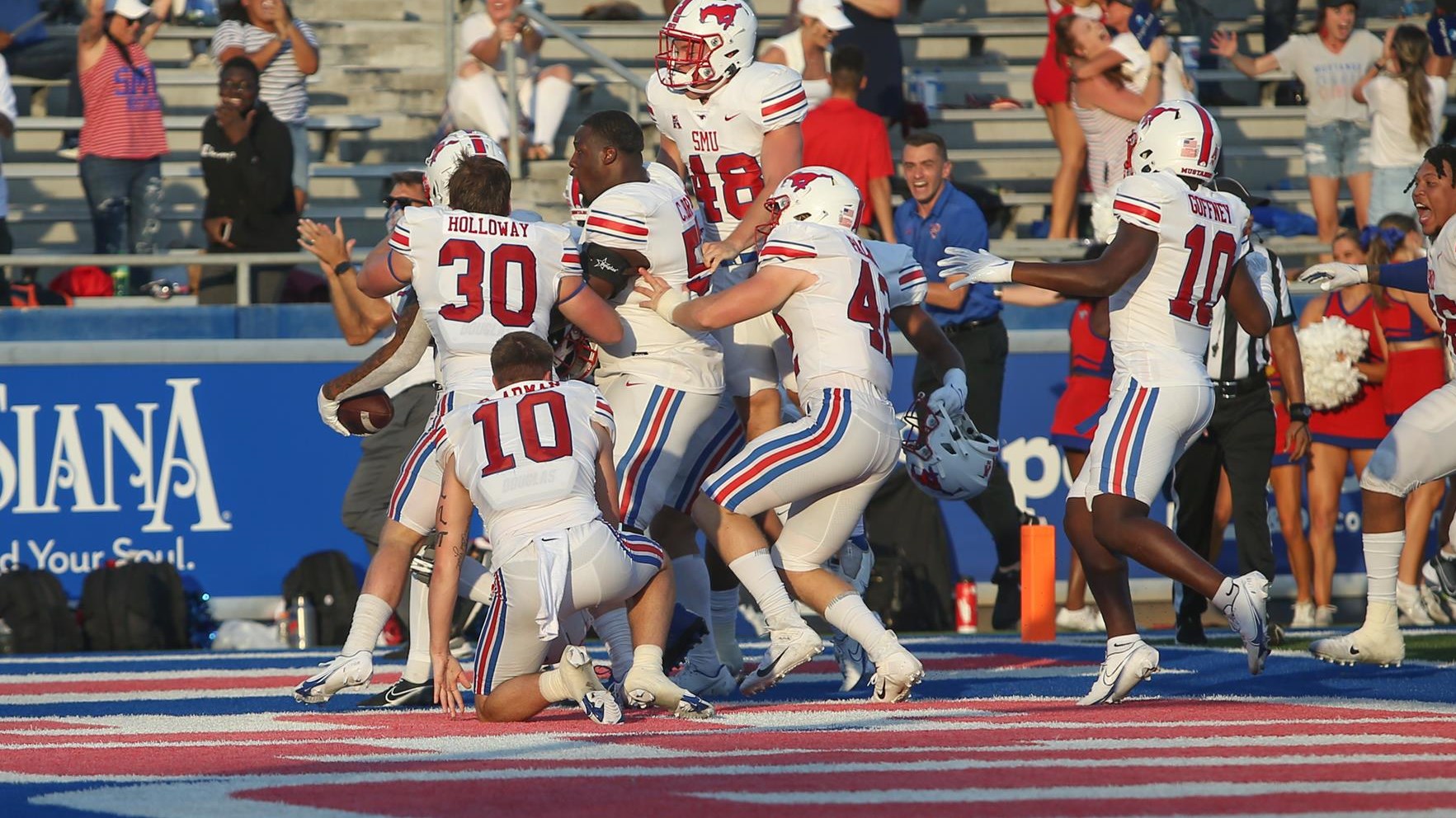 It was an up-and-down season for SMU football in 2021. And by that, we mean it was an up and then down season.

But along the way, there were tons of momentum swings and big plays over the 2,229 qualifying plays of SMU’s 2021 season.

Which improved SMU’s win probability the most, according to ESPN?

Up 28-24 with 2:19 left in the fourth quarter on Nov. 6, Memphis opted to go for it on 4th-and-3. With SMU out of timeouts, picking up the first down would’ve essentially ended the game.

From the right hash mark on SMU’s 46-yard line, quarterback Seth Henigan took the snap. It was a designed roll to the left, with Calvin Austin III running a 6-yard out route. Austin was open, but thankfully for the Mustangs, Henigan missed his man and gave SMU the ball back.

For the first 25 or so minutes of the Sept. 11 game vs. North Texas, the Mean Green frustrated the Mustangs’ offense.

With 4:06 remaining in the second quarter, Tanner Mordecai scrambled to the right to find Rashee Rice coming back to the ball.

Rice put on the burners, and SMU took its first lead — one it would not relinquish.

TCU botched the kickoff return, and only got to take it back to its 9-yard line. On its first play of the second half, Turner Coxe got into TCU’s backfield to strip sack Max Duggan. DeVere Levelston was quick behind to corral the fumble and set SMU up on TCU’s 3-yard line.

SMU entered its Oct. 9 competition against Navy as 13.5-point favorites. But after a scoop and score by Navy, the Midshipmen held a 21-7 lead over a frustrated SMU offense.

That scoop and score also gave Navy better than a 50% chance to win for the first, and only, time all game.

Bryan Massey would proceed to run the following kickoff back 95 yards to cut the deficit back to seven.

After rushing out to a 17-0 lead early on Oct. 30, Houston looked to be in control of this one. Slowly, SMU clawed its way back to only being down 23-20 at halftime.

With most of the momentum going into halftime, SMU would also get the ball to start the second half.

Down two with 1:31 remaining in the third quarter on Sept. 18, Louisiana Tech was at midfield, facing 2nd-and-10.

Quarterback Austin Kendall dropped back, looking for Smoke Harris over the middle.

That’s when linebacker Isaac Slade-Matautia jumped in front of the pass. After a 15-yard penalty for a facemask on Louisiana Tech, SMU was set up on Louisiana Tech’s 9-yard line. The Mustangs would score three plays later.

On first down, Delano Robinson stepped in front of a Seth Henigan pass intended for Javon Ivory.

Despite starting on Memphis’ 22, SMU was not able to get any points, punting on 4th-and-27 from Memphis’ 39-yard-line. In looking back on the game, this is the drive that should get more attention when looking for explanations as to how the Mustangs lost.

Every play on this list is either a turnover or points for SMU – except one. This is the most surprising play to be included on the top 10, nonetheless the top three.

After a sack on 1st-and-10, SMU had the ball on its own 41 with no timeouts and a three-point deficit against Memphis.

So, how did a routine 14-yard pass completion cause such a large change? Let’s consider the two outcomes:

The first is that it’s an incomplete pass. The following play is a 3rd-and-15 from SMU’s 41. It would need to get roughly 30 or more yards to be in field goal range to tie.

The second, what actually happened, is that it’s complete for 14 yards. The following play is a 3rd-and-1 from Memphis’ 45.

Now, SMU would only need to run the ball up the middle once to get a fresh set of downs, which it did. Then, from there, SMU only would need to pick up 15 yards or so to get into field goal range to tie.

Not only could it get into field goal range to tie, but with a little under two minutes left, there was plenty of time for SMU to also threaten the end zone to win.

Unfortunately, an interception two plays after this Calcaterra completion spoiled the comeback chance for the Mustangs.

SMU opted for a 45-yard field goal to try and force overtime instead of going for it.

Had SMU gone for it, there would have been a few potential outcomes.

First, it could’ve picked up the first down and gone on to score a touchdown to take a four-point lead with no more than 20 seconds.

Third, it could’ve picked up the first down, but not scored due to having no timeouts. A sack, a play short of the first down, or anything else of the sort could’ve been SMU’s own undoing if it was not careful.

Fourth, it could not have picked up the first down. One kneel-down for Houston would have ended the game.

Ultimately, SMU opted for a field goal to tie it up, which Mazza nailed. Unfortunately for SMU, it gave up a kick return for a touchdown to Marcus Jones on the subsequent play, which would be the winning score for the Cougars.

1. Prayers are answered, SMU squeaks a victory out with a Hail Mary

There should have been no question for SMU fans which play contributed to win probability the most.

SMU was able to get to Louisiana Tech’s 33-yard-line with just five seconds left — enough for one play.

Mordecai rolled to his left and uncorked a ball into the end zone.

By design, Rashee Rice tipped the heave to a trailing Reggie Roberson Jr., who scored with no time remaining on the clock.

And, as they say, the rest is history.