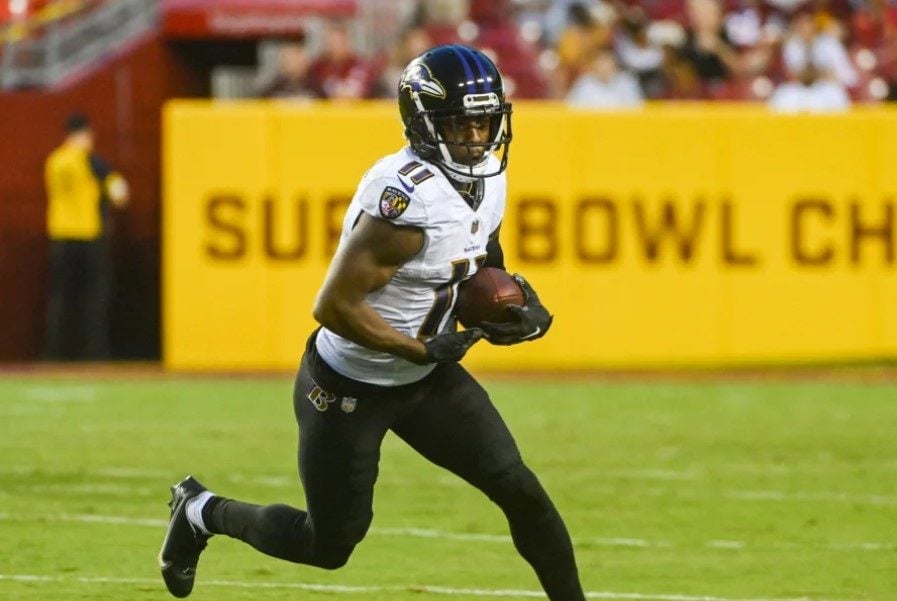 With Trey Quinn being released by the Las Vegas Raiders, we’re down to 18 former SMU Mustangs playing in the NFL. 13 of them saw action during the final week of the preseason.

Let’s see how they each did:

Proche was targeted a total of four times, catching all of them. He turned those four receptions into 52 receiving yards and his first professional touchdown in Baltimore’s 37-3 win over Washington. He also returned two punts for 26 yards — one 14-yard return and one 12-yard return.

After a catch like that, it would be nearly impossible to not have him be the Player of the Week among former Mustangs. Mustang fans may also remember it looking incredibly similar to Proche’s walk-off touchdown catch in triple overtime vs. Tulsa in 2019.

This week, he spent 90% of his snaps in the slot — his highest percentage yet.

For his efforts, Pro Football Focus felt he earned a grade of 82, which was by far his highest grade ever.

In the first week of the regular season, the Ravens will travel to Las Vegas to face the Raiders on Monday Night Football.

Stephens had his best game of the preseason, per PFF; he finished with a 74.5 defensive grade.

On the stat sheet, he tallied two tackles, one defensive stop, and only one reception allowed for two receiving yards.

There are a lot of guys in front of Stephens who might limit his ability to see the field during the regular season outside of sub packages. He also will likely see the field on special teams as a rookie, having played the second most special teams snaps of any Raven.

For the first time this preseason, Beasley saw the field in Buffalo’s 19-0 blanking of the Green Bay Packers.

In his 27 snaps, he saw five targets. He was able to turn those targets into four receptions, 52 receiving yards, and a solid 72.1 offensive grade.

In Week 1 of the regular season, the Bills will welcome the Pittsburgh Steelers to Buffalo.

Sanders also saw his first action of the preseason this week.

Unlike Beasley, he did not have as strong of a PFF grade — 53.6. He did have four receptions and 27 receiving yards, although it came on seven targets.

Gilbert was 9-for-16 in the Cowboys’ 34-14 loss to the Jacksonville Jaguars. He had 87 yards and a passing touchdown, which contributed to him having a team-high passer rating of 92.5.

PFF agreed that he had an above average game, giving him a grade of 63.

On the preseason, he finished with an overall grade of 57.7.

Cowboys fans probably hope this is the last time they see Gilbert for awhile, with Dak Prescott coming back for the Cowboys’ Week 1 road match-up against the reigning Super Bowl champion Tampa Bay Buccaneers on Thursday night.

Sutton played for the first time since his unfortunate ACL tear back before the 2020 season.

He played 11 snaps in the Broncos’ 17-12 win over the Los Angeles Rams. In those snaps, he was targeted three times for two receptions, 27 receiving yards, and a receiving touchdown.

Something that Broncos fans were waiting for with baited breath, was how Sutton would look planting on his left leg — the leg he injured. Suffice to say, Sutton looks good.

Some fans will point out that the Rams’ corner isn’t a starter, and will likely just make on the roster. But that’s not what’s important here.

What’s important here is that Sutton was able to confidently plant on his left leg at full speed in a game situation.

Sutton is back, folks.

Brown got the start for the Lions in their 27-17 loss to the Indianapolis Colts. For the first time all season, he also saw some snaps at right guard.

Given that the Lions have a young phenom at center in Frank Ragnow, it’ll be interesting to see if Brown starts to pick up steam as a right guard.

Currently, the Lions don’t have a lot of experience at right guard, with the combination Hal Vaitai, Logan Stenberg, and Evan Heim having only spent one combined season getting right guard snaps.

It’s Vaitai’s job for now, but it looks like Brown could be on his heels.

The Lions open the season playing host to the San Francisco 49ers.

Scott saw 36 snaps, where he notched three total pressures — two quarterback hurries and a sack — in Green Bay’s 19-0 loss to the Bills.

Other than those plays, it was a relatively quiet night for the linebacker en route to a 64.1 grade.

He finishes the preseason with three quarterback pressures, one sack, six stops on his eight tackles, and a 65 grade.

It’ll be interesting to see if Scott can make an NFL roster. The alternative would be to place him on waivers, and if he clears, retain him and place him on the practice squad. Given the preseason he had, it’s possible Scott would not clear waivers.

The Packers start the regular season by traveling to face the New Orleans Saints.

Granson got the start in the Colts’ 27-17 victory over the Lions.

In the start, he caught three of his four targets for 23 receiving yards.

After a rough game against Minnesota last week, he needed to bounce back. And bounce back he did.

He had a 64.6 grade against Detroit, bringing his preseason grade up to 53.4.

Granson finishes the preseason with five receptions and 39 receiving yards on 11 targets.

Granson will be an interesting player to track during the regular season. The Colts hope he can take over as Jack Doyle enters his age 31 season and Mo Alie-Cox is in a contract year.

The Colts start the season with a challenging home game against the Seattle Seahawks.

Buechele saw a lion’s share of the quarterback snaps in the Chiefs’ 28-25 victory over the Minnesota Vikings.

Backup Chad Henne got the day off, which allowed Buechele to throw the ball 33 times.

He was 20-for-33 with 231 passing yards, two touchdowns, and an interception that was returned for a touchdown.

In the second half, Buechele waned a bit. First, he lost a fumble on a bad option pitch, and then had an ugly pick-six later on.

Despite that, Buechele still had a fine game overall.

He finishes the preseason with a 67.3% completion percentage, 422 passing yards, three passing touchdowns, two interceptions, a 93.1 passer rating, 14 rushing yards, one rushing touchdown, and a 60.8 grade.

The Chiefs start the 2021 season with a home match-up against the Cleveland Browns.

After being a seemingly healthy scratch in the second preseason game, Clemons saw more playing time than he had in the rest of the preseason.

Clemons did get hit with an unnecessary roughness penalty in the third quarter.

He finishes the preseason with a couple tackles, a pass deflection, and a 65.8 grade.

He did force four missed tackles, which was his single-game career-high by three.

He finishes the preseason with a slightly below average offensive grade of 56.

As far as preseason stats go, Jones finished with 94 rushing yards on 27 carries — a lukewarm 3.5 yards per carry. He also notched six receptions for 36 receiving yards.

The good news for Jones is that there has yet to be any Rams’ running back that has made his presence felt. With the Rams’ recent acquisition of Sony Michel, hopefully Jones’ chance at getting carries doesn’t diminish.

PFF thinks Lawler really struggled in the Rams’ loss to the Broncos, giving him a grade of 40.4.

He did notch a pair of tackles, as well as a quarterback hurry. What killed his grade were the two missed tackles.

Despite the subpar grade, he still finished the preseason with an above average grade of 65.5. As for traditional box score statistics, he had two quarterback hits, four quarterback hurries, and eight tackles.

The Rams start the season out with a home contest against the Chicago Bears in Justin Fields’ first career start.

SMU Players of the Week: