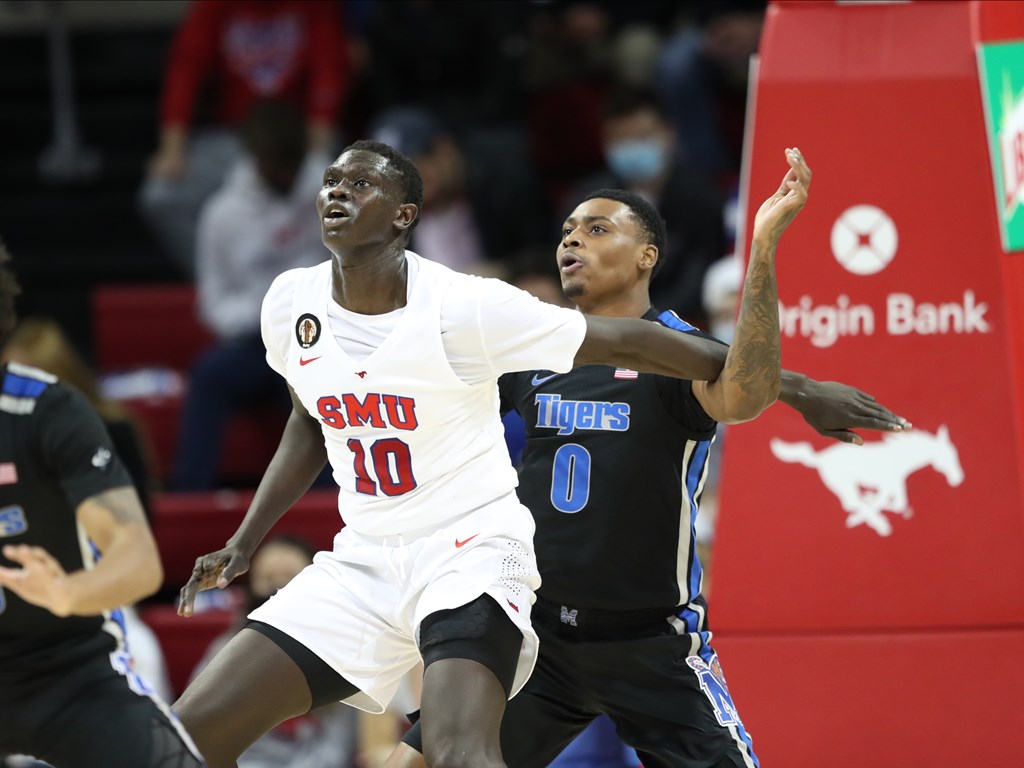 After a 76-72 loss to Memphis just two days prior, SMU squeaked out a nail-biter to split the regular season series with Memphis on Thursday night, 67-65.

Memphis came out slow, turning the ball over four times before scoring its first points.

That sloppy offense from the Tigers persisted throughout the entire first half. Despite shooting 47.6% in the first half, they only scored 23 points thanks to 12 turnovers.

For the Mustangs, Kendric Davis struggled shooting in the first half, going 0-for-8 from the floor. Despite his struggles shooting, Davis was consistently in the right place. He notched four assists, a steal, and a couple rebounds despite the jump shot not falling.

Feron Hunt came in averaging 12 points per game. However, he had a strong first half. He led SMU with 13 first-half points — four coming from explosive dunks.

Perhaps the biggest difference was SMU’s playmakers staying out of foul trouble in the first half. SMU only had four team fouls, and no one had more than one.

SMU continued its strong performance at the beginning of the second half. With about 12 minutes to go, SMU took a 54-38 lead on a Hunt basket. After that made basket, ESPN gave SMU a 97.8% win probability chance.

Memphis then proceeded to go on an 11-0 run that lasted four and a half minutes. After SMU did not hold its 13-point lead against Memphis on Tuesday, this game surely ended up giving Mustang fans some unpleasant déjà vu.

Memphis took its first lead coming out of the under-4 media timeout, 59-58.

After a few lead changes and some huge plays for both teams, SMU was holding onto a 67-64 lead with 10.6 seconds left.

With 3.6 seconds left, Memphis’ Boogie Ellis was fouled shooting a three. He had the opportunity to tie the game with free throws.

He made the first, but missed the second. Ellis intentionally missed the third free throw, and Tyson Jolly secured the rebound for SMU. All looked lost for Memphis momentarily, but it was able to force a held ball while having the possession arrow.

Thanks to some solid defense, SMU was able to hold on and tip the in-bounds pass to cause the clock to expire.

The three-point shooting for SMU was awful on Thursday night. As a team, SMU was 5-for-21 (23.8%) from deep. Removing Hunt’s 1-for-2 and Ethan Chargois’ 3-for-4 efforts, SMU was 1-for-15 from three (6%). Emmanuel Bandoumel and Kendric Davis being a combined 1-for-13 was a large part of the problem. Typically they are consistent shooters, and SMU really missed that consistency.

Hunt added four more points in the second half to lead all SMU scorers with 17. He also added overall strong showing as a scorer for the soon-to-be NBA Draft prospect.

Similar to the first half, Davis still had his ability to contribute in more ways than just scoring. The point guard finished with eight assists, four rebounds, and he forced a crucial charge with just a minute to play. This was an ugly game for Davis’ box score, but he still hustled like he dropped 27 with 12 assists.

Davis has averaged an impressive 17.3 points per game and six assists against his hometown’s university. This weekend would be a great time to reassert himself as the best point guard in the AAC.

Alex Lomax made some big plays down the stretch for the Tigers, contributing eight assists. Not counted in those assists was a play where Lomax scored after he bounced the inbounds pass off of Davis’ back while Davis was turned away from Lomax.

Are co-head coaches for SMU working?

SMU fans are used to also seeing more players rotate at a higher frequency when Coach Tim Jankovich is at the helm. On Thursday, it was really only the six of Hunt, Chargois, Bandoumel, Davis, Anei, and Jolly that got much playing time under the co-head coaching duo of Yaphett King and John Cooper. This will be something to watch when SMU goes to Houston on Sunday.

This team is built on several guys all being starter caliber, but while the co-head coaches have been at the helm, they’ve let it ride with the starters for longer. Davis has been struggling in the last couple of games, but he might just be tired.

Typically an elite passer, Davis airmailed Jolly down the stretch tonight. It was a challenging pass, but one he usually makes – the type of pass that separates him from the other good point guards in the AAC.

Memphis and SMU has been WILDLY entertaining

After Tuesday’s nail-biter, this game thankfully kept all of the competitive fire and emotion after a location change. Splitting the regular season series feels right for these teams. These games have shown that these teams are as evenly matched as college basketball teams can be. These games have also shown that Memphis and SMU are two of the best teams in the conference, and are very deserving of at-large spots come NCAA Tournament time.

For all of the nail-biters out there – it’s great that Memphis and SMU are not scheduled to play anymore for your nails’ sake. For all of the fellow college basketball fans out there, let’s hope that these two teams get matched up in the AAC Championship for a decisive third game.