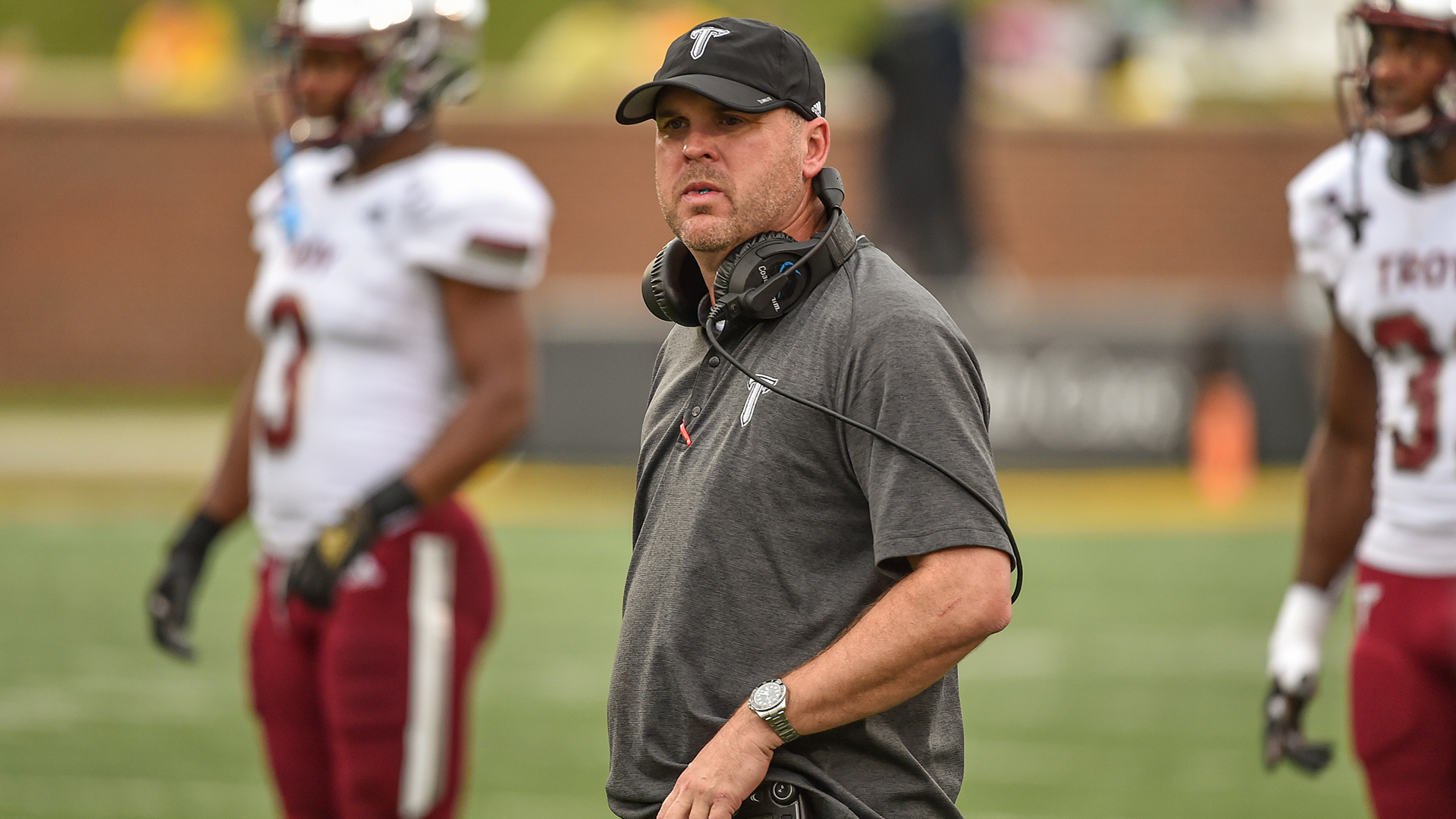 After three seasons, Troy has decided to move on from Chip Lindsey as head coach.

Before Troy, Lindsey spent multiple years in the high school ranks in Alabama as a head coach, and also made stops at Auburn as an assistant. Unfortunately, those connections to Troy did not translate well to the field.

After compiling a losing record in each of the last three seasons, the next coach will have a turnaround to complete.

The last three years have been a bit of an outlier for Troy, which is usually one of the top Group of 5 programs in the nation.

Since the formation of the Sun Belt in 2001, Troy has won the conference six times — good for second behind Arkansas State. Its last title came in 2016 under Neal Brown. Brown would eventually leave to take the West Virginia job, where he remains.

Lindsey failed to compete at the level Troy believed it could, but not all hope is lost for the Trojans. Not too long ago, Troy was taking on and beating programs like LSU and Nebraska on top of competing for conference championships. With the right head coach, there is no reason to believe that Troy can’t rise back to the top of the Sun Belt, especially with the likes of Billy Napier and Jamey Chadwell drawing interest from Power 5 programs.

To the surprise of some, Texas fired Tom Herman this past offseason after compiling a 32-18 record. That included a 4-0 record in bowl games. Many people expected Herman to land on his feet, but he is currently just an offensive analyst on staff for the NFL’s Chicago Bears.

There is reason to believe Herman would want to get back into the college ranks as a head coach, and a high-profile Group of 5 job like Troy could be good enough to pull him back.

No, Herman does not have deep recruiting connections in Alabama, but he has had success everywhere he’s been. This hire would prove well for both sides. The question is, would Troy take a chance on someone who would likely just use it as a launching pad for a bigger job?

Finding someone with connections to Troy and the state of Alabama might be very important for the Trojans. After all, there is a lot of instate competition for recruiting in Alabama. They need all the help they can get.

Lesley, a former Troy player and assistant, knows the lay of the land in that area. On top of that, he is a pretty good coach too. As co-defensive coordinator in 2020, West Virginia had the best passing defense in the nation. He’s since been promoted to defensive coordinator.

For Troy, hiring someone from the Neal Brown coaching tree has to sound intriguing. After all, the Trojans would like to recreate as much of the Brown era as they possibly could.

This is not the first or last time you will hear Dell McGee mentioned for a head coaching job. Not only does he have an impressive track record as a high school head coach, but he is arguably the best running backs coach in college football.

Since joining Georgia’s staff in 2016, McGee has helped recruit and develop players like Nick Chubb, Sony Michel, D’Andre Swift, James Cook, and Zamir White into elite-level ball carriers in the SEC. Before coming to Athens, he spent time as an assistant at Georgia Southern.

While McGee does not have extensive coaching roots in Alabama, he was a standout defensive back at Auburn and was eventually selected in the NFL Draft. He later would spend a year on Auburn’s 2013 coaching staff as an analyst.

McGee is one of the best recruiters in the game and would be a splash hire for Troy. Still, would McGee be willing to leave his position at Georgia for Troy? Or will a bigger school eventually come calling?

Whenever a Group of 5 job opens like this, it is important to go through and look at every possible candidate — even the high school ranks. The best high school football coach in the state of Alabama is a great place to start.

Currently, at Thompson, Freeman has turned a once-lackluster football program into one of the premier programs in the entire country. In seven seasons, Freeman has brought three state titles to Thompson and has compiled a 71-15 record so far.

Even prior to that, Freeman is a proven winner. At Spanish Fort, Gulf Shores, and Bessemer Academy, Freeman went 164-37 while winning a whopping nine state titles.

His long history across Alabama high schools would pay dividends on the recruiting trail. Winning 12 state titles is certainly a legendary resume. Would he be willing to challenge his own legacy by taking on the college ranks?