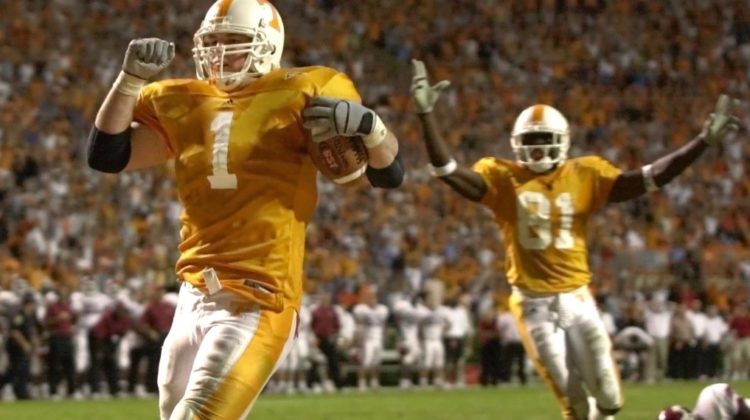 Since Arkansas entered the SEC in 1992, close contests with Tennessee have been fairly common. When it comes to long contests, however, the 2002 matchup in Knoxville stands alone.

On this day 20 years ago, the Volunteers needed six overtimes to knock off pesky Arkansas. In the end, a touchdown pass from Casey Clausen to Jason Witten propelled Tennessee to a 41-38 victory.

Arkansas was coming off a 30-12 loss to Alabama and unranked as it arrived at Neyland Stadium on Oct. 5, 2002. The Razorbacks were not only looking to avoid losing consecutive games, but to avoid a third straight loss to Tennessee.

The Volunteers had won 13-3 the year before and were also 2-1 for the contest. Ranked No. 11, Tennessee was coming off a loss to Florida. Getting back in the win column would be tougher than many expected.

As was the case the year before, points were hard to come by — at least for three quarters. Tennessee led 10-3 entering the fourth quarter and doubled its lead less than a minute in on a 58-yard touchdown run by Jabari Davis.

With things looking bleak for Arkansas, the Razorbacks used the big play to even things up. After De’Arrius Howard’s 10-yard touchdown run with less than seven minutes to go pulled the Razorbacks back to within seven, a long touchdown less than four minutes later drew them even. With 3:30 left, Matt Jones’ 92-yard touchdown to Richard Smith knotted the score.

To overtime, it went.

Each team had a chance to win the contest with a touchdown over the first two overtimes. Instead, they exchanged field goals. In the third overtime, both missed field goals.

In the fourth overtime, Jones found the end zone from five yards away, but the 2-point conversion try was missed. It took Tennessee just one play to answer as Clausen connected with Troy Brown for a 25-yard score. With a chance to win the game, the Volunteers missed their 2-point try.

In the fifth overtime, the teams again traded touchdowns and missed conversions. Howard scored from a yard out to tie the game at 35, but with a chance to win it for Arkansas, Jones’ 2-point pass was intercepted.

In the sixth overtime, Tennessee held Arkansas to a field goal. It needed just one play to end it once and for all.

Back to pass, Clausen delivered a perfect strike to Witten, his tight end, over the middle. An Arkansas defender was unable to knock the ball away as Witten walked in for the game-winning 25-yard touchdown.

Once and for all, the game was over.

Arkansas would bounce back to beat No. 24 Auburn on the road before losing at home to Kentucky. After a 3-3 start, the Razorbacks won their final six regular season games to win the SEC West. They finished 9-5 following losses to Georgia in the SEC Championship and Minnesota in the Music City Bowl.

As for Tennessee, it would also be a 5-loss season as the Volunteers finished just 8-5 with a Peach Bowl loss to Maryland. Tennessee finished unranked in both polls for the first time under head coach Phil Fulmer.

The 6-overtime meeting in Knoxville, however, served as the second-longest college football game at the time. It came on this day two decades ago.