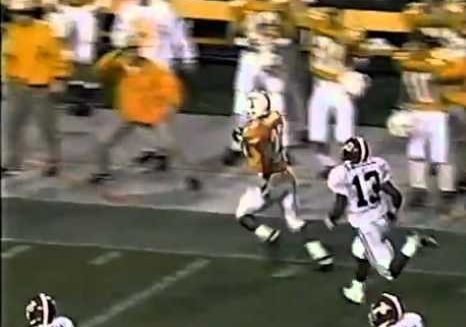 The rivalry isn’t the spectacle it used to be, but for a long time, the third Saturday in October was a date to be circled on the calendars.

Alabama and Tennessee both had success in the 1990s and both won multiple SEC titles during the decade. Tennessee won the final five meetings of the decade, including one that occurred on this day 25 years ago.

Jay Graham’s long touchdown run was the difference as the Volunteers rallied. Tennessee scored the game’s final 20 points in a 20-13 victory.

It was a top-10 matchup as Alabama and Tennessee arrived at Neyland Stadium on Oct. 26, 1996. The Crimson Tide were a perfect 7-0 and were ranked No. 7 in the country. To that point however, they had not played a ranked team.

Tennessee had shaken off an early-season loss to Florida and arrived on a 2-game winning streak. With a record of 4-1, the Volunteers were ranked No. 6 in the country.

Tennessee once trailed 13-0, but had drawn even in the fourth quarter. With less than three minutes to play, the Volunteers had the ball but weren’t exactly in an ideal situation.

Tennessee faced 2nd-and-12 from its own 21-yard-line. Rather than let Peyton Manning air it out, Tennessee elected to run the football. That decision would be a good one.

To that point, Graham had just 13 carries for 49 yards against Alabama’s stout defense. On the second down play, Graham was helped by a pair of key blocks before putting a move on Alabama safety Kelvin Sigler. Graham hit the sideline and all that stood between him and the end zone was green grass.

With 2:17 remaining, his 79-yard scamper gave Tennessee its first lead, 20-13. Alabama however, would make things interesting.

After an incredible fourth-down effort by running back Dennis Riddle on a swing pass kept the ensuing Crimson Tide drive alive, Alabama had first down at the Tennessee 11-yard-line. That however, was followed by three straight incomplete passes from quarterback Freddie Kitchens.

Again, Alabama was down to one play.

This time however, Riddle, who rushed for 184 yards, wasn’t there to save the day. Tennessee’s Leonard Little was able to strip Kitchens before he could fire the pass to seal the comeback victory.

Through one half, an Alabama field goal accounted for all the scoring. On the opening drive of the second half, Kitchens and Marcell West connected for a 40-yard touchdown.

After an interception of Manning by Deshea Townsend set up another field goal, the Volunteers finally got on the board in the third quarter with a 54-yard touchdown pass from Manning to Joey Kent. The extra point was no good, but Tennessee drew even in the fourth.

Terry Fair appeared to tie the game with an 84-yard interception return for a touchdown, but an illegal block brought the ball back to the Alabama 43-yard-line. Graham would score from five yards out on the ensuing drive to tie the game.

Alabama would lose again two weeks later at Mississippi State, but still managed to win the SEC West for a fourth time in five years. After falling to eventual national champion Florida for the SEC Championship, the Crimson Tide capped a 10-win season with a 17-14 win over Michigan in the Outback Bowl.

Tennessee also lost two weeks later, inexplicably to Memphis, but closed the year on a 4-game winning streak. The Volunteers capped the year with a 48-28 rout of Northwestern in the Citrus Bowl to finish 10-2 and No. 9 in the final polls.

While Tennessee won 10 games in 1996, only two were decided by seven points or fewer. The first of those came courtesy of a long touchdown run by Graham and on this day a quarter-century ago.