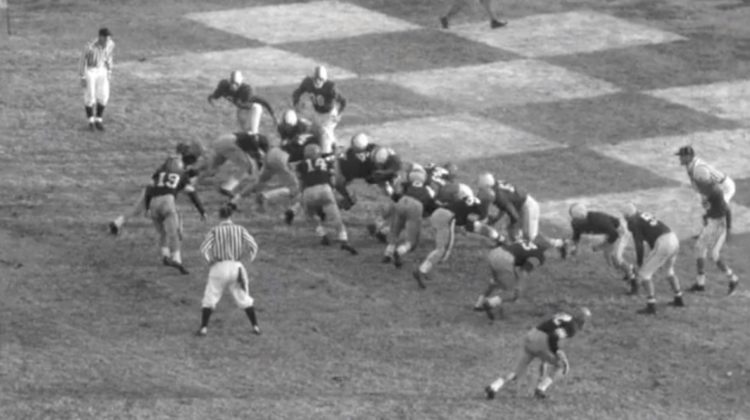 Over the years, Ole Miss has knocked off a number of highly ranked teams and more than one eventual national champion. One, however, might argue that the victory that put the Rebels on the map took place on this day 70 years ago.

That’s when Ole Miss picked up its first-ever win over an AP top-5 team. Jimmy Lear had a day to remember as the Rebels snapped No. 3 Maryland’s 22-game unbeaten streak, 21-14.

Ole Miss was 6-0-2 and on a 4-game winning streak as it arrived at Hemingway Stadium in Oxford on Nov. 15, 1952. Led by head coach Johnny Vaught, the Rebels were ranked No. 11 in the country and coming off back-to-back shutouts over LSU and Houston.

Ranked third in the country, Maryland was 7-0 and had not lost a game in more than two years. Not since a 13-10 win over Missouri in the opener had any opponent scored more than seven points against head coach Jim Tatum’s team. Ole Miss changed that.

Against a Maryland defense that allowed less than 157 yards per game, Lear finished with 275 total yards in Oxford. As a team, Ole Miss racked up 461 yards.

Despite that, the Rebels trailed 14-7 after three quarters. Buck Howell scored the first touchdown for Ole Miss to tie the game at seven, but Jake Nolan returned the ensuing kickoff 90 yards for a score to put the Terrapins back in front.

Ole Miss had two opportunities to even the game during a scoreless third quarter, but was turned away each time. Lear finished 11-for-16 passing for 231 yards. His only touchdown pass came in the fourth quarter on a strike to Wilson Dillard that tied the game at 14.

Although that was his only touchdown toss, long throws would set up Ole Miss’ two other scores. The decisive score came midway through the final period following a 40-yard connection from Lear to Bud Slay. Dillard scored two plays later to put the Rebels ahead for good. To add to his stellar day, Lear was 3-for-3 on extra point attempts.

Maryland would fall to Alabama the very next week to close the season. The Terrapins’ 22-game unbeaten streak was met with a 2-game losing streak. The following year, however, Maryland would go 10-1 and claim its only national championship.

Ole Miss would go on to complete its first undefeated regular season in 1952, but fell to No. 2 Georgia Tech in the Sugar Bowl, 24-7. At 8-1-2, the Rebels finished No. 7 in the AP Poll — their first-ever top-10 finish. The first top-10 finish came following a season in which the Rebels collected their first top-5 victory. That one came on this day seven decades ago.