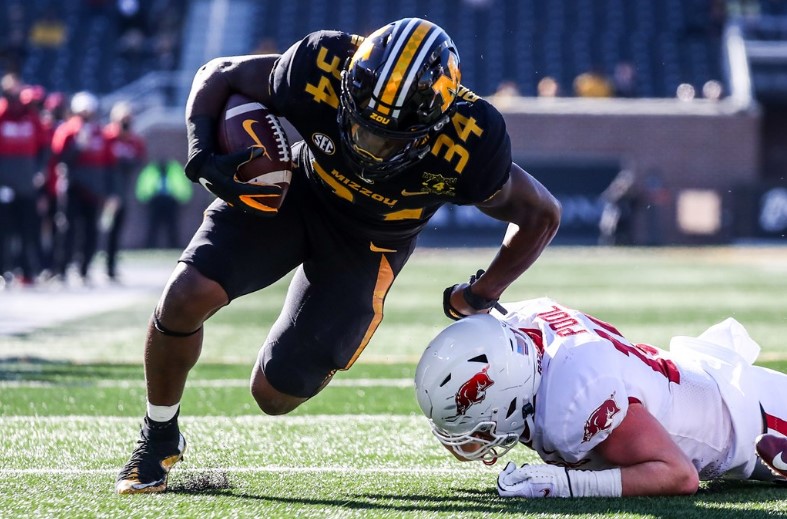 After a 2020 season of ups and downs, the Missouri Tigers look to end the year with their first bowl win since the 2014 Citrus Bowl. That year, Mizzou closed with a 33-17 victory over Minnesota.

The Tigers fought through COVID-19 issues, injuries and a tough schedule to finish 5-5 and third in the SEC East in 2020. In the process, they’ve earned themselves a spot in the Music City Bowl against the 15th-ranked Iowa Hawkeyes. The teams will meet on Wednesday in Nashville.

The Tigers entered the 2020 season with relatively low expectations. With a brand new coaching staff and question marks at the quarterback position, most projected Missouri to win a maximum of three games out of 10 on the all-SEC schedule adjusted for COVID-19.

While head coach Eliah Drinkwitz was determined to begin the new era of Mizzou Football with success, it didn’t come easy. The Tigers looked lost against Alabama and Tennessee in the first two games of the season. Missouri was 0-2 for the first time since 1994.

Drinkwitz quickly righted the ship, finding the missing piece to the Tigers’ offense by the time LSU came to town. That piece was quarterback Connor Bazelak. Bazelak has since been named SEC Freshman of the Year.

Bazelak, a redshirt freshman, flourished at the helm of Drinkwitz’s new offensive scheme. The Ohio native threw for 2,336 yards and seven touchdowns in just eight starts. He rushed for two touchdowns as well.

Bazelak wasn’t the only one who hit his stride in 2020. Linebacker Nick Bolton, who will skip the Music City Bowl for NFL Draft preparation, found himself listed as first-team All-SEC and second-team All American (The Athletic).

Bolton tallied 53 solo tackles, two sacks and one touchdown. Bolton, the Tigers’ most electric defensive player in 2020, is expected to be picked in the first round of the 2021 NFL Draft.

Rountree reserved himself a place in Missouri history, becoming the all-time leading rusher among running backs for the Tigers. His 972 yards and 14 touchdowns were good enough to boost him to second on the all-time rushing leaders list at 3,720 yards.

He finds himself behind only former quarterback Brad Smith, who has 4,193 yards to his name. Rountree will be playing in the Music City Bowl, but will head to the NFL Draft upon completion of the season.

A Successful Year, and a Great Hire

Despite ending the regular season with back-to-back losses to Georgia and Mississippi State, which ultimately cost Drinkwitz any chance to win SEC Coach of the Year, the Tigers had a very positive 2020. With statement wins over reigning national champion LSU and a revamped Arkansas team, Missouri outperformed all expectations.

The Tigers have set themselves up for success in the future. The bottom line is that this team has the right stuff to make it in the SEC.

The Tigers turn their attention to No. 15 Iowa (6-2) in Nashville on Dec. 30 at 3 p.m. CT. The Hawkeyes had a rough 0-2 start to the season after losses to Purdue and Northwestern. Despite a bad beginning, they were very solid in 2020. Iowa handled business the rest of the way, winning each of its next six games by a touchdown or more.

The Music City Bowl is a rematch of the 2010 Insight Bowl, in which Iowa defeated Missouri 27-24. Iowa prevailed late by way of a pick-six by Micah Hyde off Missouri quarterback Blaine Gabbert.

The Tigers do lead the series between the two teams, 7-6. They’ll look to extend that lead on Wednesday as they face off against a top-10 national scoring defense that has not given up more than 24 points in any game this season. It’s tough task, but one that the 2020 Missouri Tigers are more than up for.