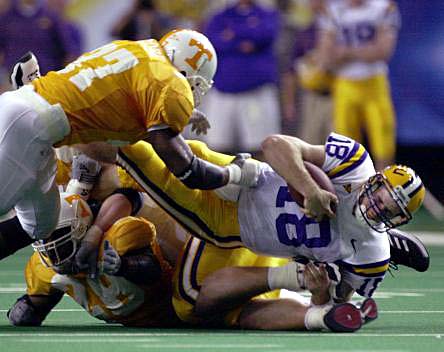 Since the inception of the SEC Championship game in 1992, only Alabama and Florida have won more conference titles than LSU. The Tigers have emerged victorious in Atlanta five times.

The first of those however, took a major upset. It came on this day 20 years ago.

LSU was making its first SEC Championship appearance as it arrived in the Georgia Dome on Dec. 8, 2001. Led by second-year head coach Nick Saban, LSU came in with a record of 8-3 and on a 4-game winning streak. The Tigers had defeated Auburn the week prior in a de facto SEC semifinal.

Tennessee was one win away from a berth in the Rose Bowl for the national championship. At 10-1, the Volunteers were ranked second and on a 7-game winning streak. Tennessee was also coming off a huge win, knocking off No. 2 Florida in Gainesville. It arrived as 7-point favorites.

It was the Tigers who drew first blood in the contest as quarterback Matt Mauck scored on a 4-yard keeper in the first quarter. The Volunteers however, erupted with 17 straight second-quarter points.

Quarterback Casey Clausen threw touchdown passes to Kelley Washington and Troy Fleming before Alex Walls connected on a 51-yard field goal. Before the half, LSU was able to make it a 1-score game on John Corbello’s 44-yard field goal.

Corbello connected on kicks of 47 and 45 yards to draw LSU to within one at 17-16 after three quarters. Following a fumble by Tennessee’s Travis Stephens, the Tigers went ahead for good early in the final period.

The fourth quarter was just 40 seconds old when Mauck’s second rushing touchdown of the night put LSU in front for the first time since the early parts of the second quarter. Mauck then found Josh Reed for the 2-point try to give LSU a 24-17 edge.

The ensuing Tennessee drive reached the LSU 4-yard-line, but three straight incomplete passes from Clausen forced Walls to settle for a short field goal. LSU went 3-and-out on the ensuing possession. Tennessee seemed to be in business after a strike from Clausen to Donte’ Stallworth started the ensuing drive, but the standout receiver was stripped in LSU territory and the Tigers recovered.

LSU mounted a 12-play, 65-yard drive that ate five minutes off the clock. With less than three minutes to go and the Tigers facing 4th-and-goal from the 1-yard-line, Saban had a decision to make. His offense stayed on the field.

It was running back Domanick Davis, who got the carry. Davis went over the top and into the end zone to put the contest away.

Tennessee finished with nearly 100 more yards than LSU, but the two turnovers that led to Tiger touchdowns proved huge. LSU played both Mauck and Rohan Davey at quarterback, but most of its production came on the ground.

For Tennessee, it was the opposite. While Stephens was held in check, Clausen passed for 332 yards. Washington led all receivers with nine catches for 140 yards.

The loss would cost Tennessee a chance at a national championship. It settled for a Citrus Bowl berth. The Volunteers drubbed Michigan 45-17 to finish No. 4 in the final polls.

LSU would go on to beat Big Ten champion Illinois in the Sugar Bowl, 47-34. The Tigers finished seventh in the AP Poll.

As for Saban, he has gone on to coach teams at LSU and Alabama to 10 SEC titles. The first one came in upset fashion on this day two decades ago.