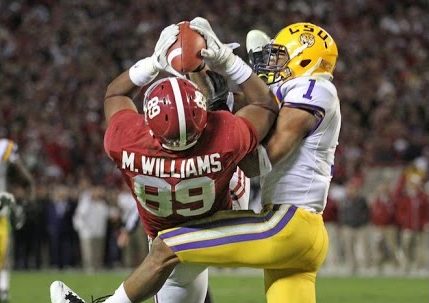 They say defense wins championships. In 2011, that was certainly the case.

On this day 10 years ago, the two teams that would play for college football’s ultimate prize gave quite the appetizer. In a matchup of No. 1 vs. No. 2, it was LSU that outlasted Alabama in overtime, 9-6.

No. 1 LSU was a perfect 8-0 as it made its way to Bryant-Denny Stadium in Tuscaloosa on Nov. 5, 2011. The Tigers had already defeated five ranked teams and had not played a game decided by fewer than 13 points.

Second-ranked Alabama was about as dominant. Like the Tigers, the Crimson Tide were 8-0 and had been virtually unchallenged. To that point, they had not played a game decided by less than 16 points.

Alabama took a 6-3 lead into the fourth quarter, but LSU wasted no time evening things up. After Morris Claiborne returned an interception from Alabama quarterback AJ McCarron to the red zone, Drew Alleman connected on a 30-yard field goal to knot the score.

It appeared however, as though the Crimson Tide would respond. The ensuing drive reached the LSU 30-yard-line and looked as though it would end in a touchdown. Head coach Nick Saban’s staff reached into its bag of tricks as wide receiver Marquis Maze was called upon to throw a pass.

Maze appeared to have tight end Michael Williams open near the goal line, but LSU safety Eric Reid made an incredible break on the ball. Reid was able to rip the ball away for an incredible interception and the score remained tied, 6-6.

Neither team threatened for the remainder of regulation.

In overtime, Alabama got the first possession, but the LSU defense stood tall. Two incomplete passes, a penalty and a sack of McCarron by Sam Montgomery pushed the Crimson Tide back to the 35-yard-line. Alabama had already missed three field goals to that point before Cade Foster’s miss from 52 yards away made it four.

On the second play of the LSU possession, Michael Ford rumbled 15 yards to the Alabama 7-yard-line. That set the stage for Alleman to end the contest as he knocked through the winning 25-yard field goal.

The victory for LSU appeared to clear the path for the Tigers to win their third national championship in eight years. Alabama however, would have the last laugh.

LSU won the SEC with a perfect 13-0 record, but for the BCS National Championship, they again met Alabama. This time around, the Crimson Tide won, 21-0.