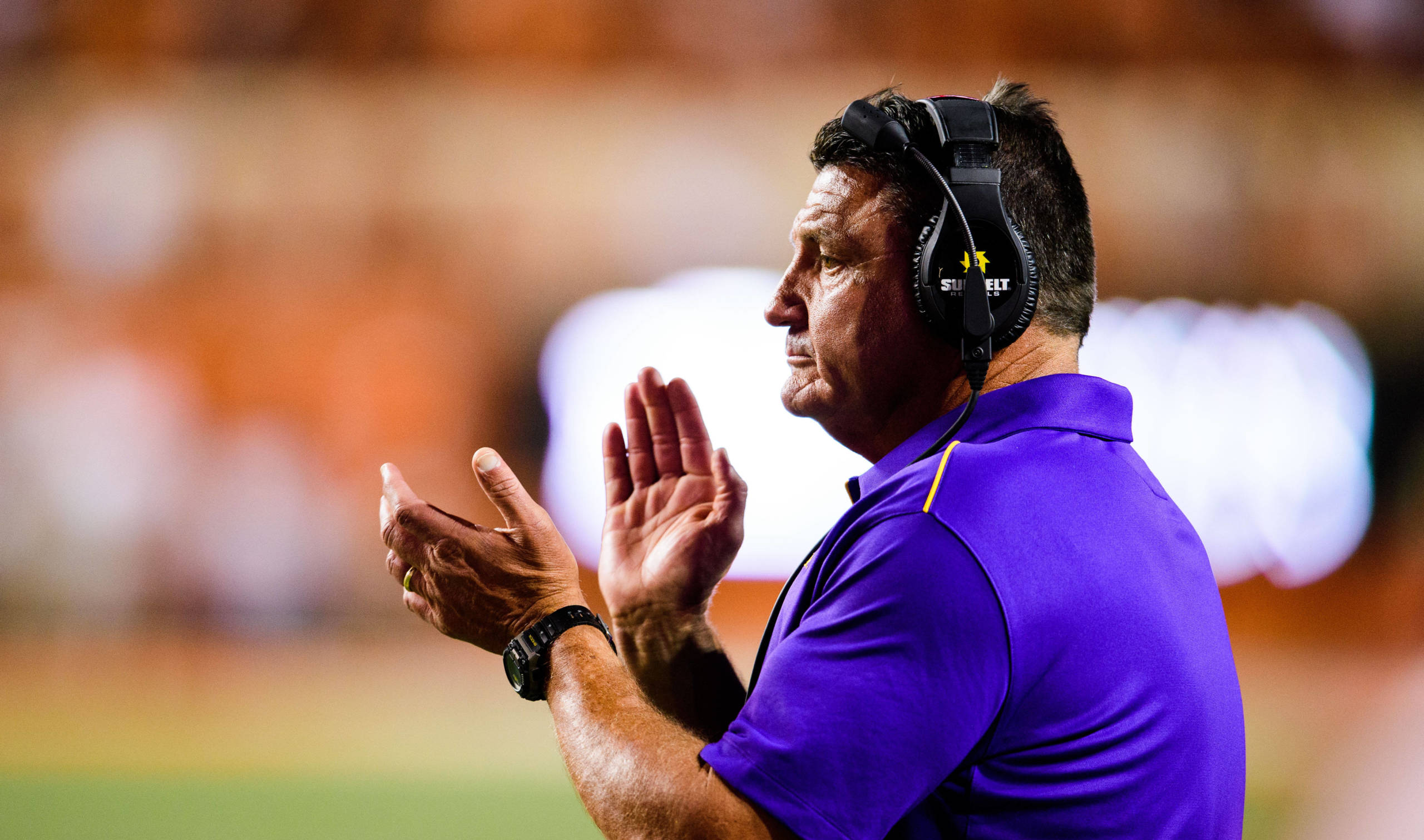 Many fans were hoping for a turnaround in 2021, but LSU kicked off the year with an upset loss to UCLA. Now, speculation about Ed O’s job has turned into reality. If LSU has another 5-loss season, the fifth-year coach could be on the chopping block.

Still, not all hope is lost. LSU is a talented team, and there is plenty of time to turn things around.

However, things are still starting to look grim. If the LSU job opens up soon, here are some names to keep an eye on.

Napier would make the most sense. He is a guy with direct ties to the SEC and Louisiana. The former Alabama staffer was the wide receivers coach under Nick Saban from 2013 to 2016. At Alabama, he flexed his muscles as a recruiter. His efforts with the Crimson Tide eventually landed him in Lafayette, where he has been since 2018.

Napier has turned around the Ragin Cajun football program in a big way. Since taking over, Napier has won his division all three seasons. In 2019, Louisiana finished 11-3 then followed up that season with a 10-1 campaign in 2020.

His success at Louisiana has led to his name being brought up in recent coaching searches — most notably, South Carolina and Auburn. Despite these high-profile jobs opening up, he has opted to stay at Louisiana. Why? Maybe because he knows a bigger job will open soon.

Could LSU be the team that pulls him away from Lafayette? We don’t know, but it has the money and image to do so.

Many people are under the belief that Joe Brady won’t leave the NFL. However, a potential return to LSU as the head coach could be enough to pull him away.

Brady is relatively new to the coaching world. When he landed at LSU in 2019, he introduced an offensive scheme that helped create one of the best teams in college football history. Quarterback Joe Burrow turned into a Heisman Trophy winner after putting up arguably the best season ever for a quarterback. Ja’Marr Chase also won the Biletnikoff Award. These efforts ultimately led him back to the NFL.

Would Brady take a head coaching job this early in his career? After all, he is only 31 years old. He was however, connected to NFL head coach openings, such as the Atlanta Falcons’ job.

It might be a risk, but Brady would bring some excitement back. LSU enjoyed a dominant 15-0 season and national championship when he was last on staff.

The upside here might be enough for LSU to pull the trigger.

Aranda hasn’t gotten off to a hot start as Baylor head coach, but he has connections to LSU.

Aranda was LSU’s defensive coordinator from 2016-19. Under Aranda, the Tigers produced some of the best defenses in the country. His efforts at LSU ultimately landed him at Baylor for his first head coaching gig.

Aranda is just 3-7 so far in Waco. Baylor took a significant step in the wrong direction in 2020, but it is still early on in his tenure.

If Aranda can get on track at Baylor, he is someone to watch out for. He is a great defensive mind, and has ties to that part of the country. Again. this is largely hinged on what happens during his tenure at Baylor.

This may seem like a long shot, but is it really? After all, Lane Kiffin has had the tendency to jump around.

In fact, there were even rumors that he was flirting with the Auburn opening this past offseason. So, why wouldn’t he flirt with the LSU job?

Whether it’s as a coordinator or a head coach, Kiffin has won just about everywhere he’s been on the collegiate level. Now, he is starting to turn things around at Ole Miss.

If LSU could pull it off, it would be getting an elite recruiter and one of the best offensive minds in the sport. Again, the question is if Kiffin would make this move. With legitimate interest from the Tigers, a jump is well within the realm of possibility.

There have been rumors about LSU wanting Jimbo Fisher, but that doesn’t seem realistic. So, why not go get his right-hand man?

Since arriving at Texas A&M with Fisher, coordinator Mike Elko has slowly turned the Aggies’ defense around. In three years, they finished 34th, 31st, and ninth in total defense.

Elko has already been connected to some head coaching jobs, and it is easy to see why. He is a young and energetic coach who has found some success. At just 44 years old, he has 12 years of experience calling defenses.

When you double his success with recruiting abilities, you have a guy who should be a head coach very soon. Would LSU be willing to give him an opportunity?