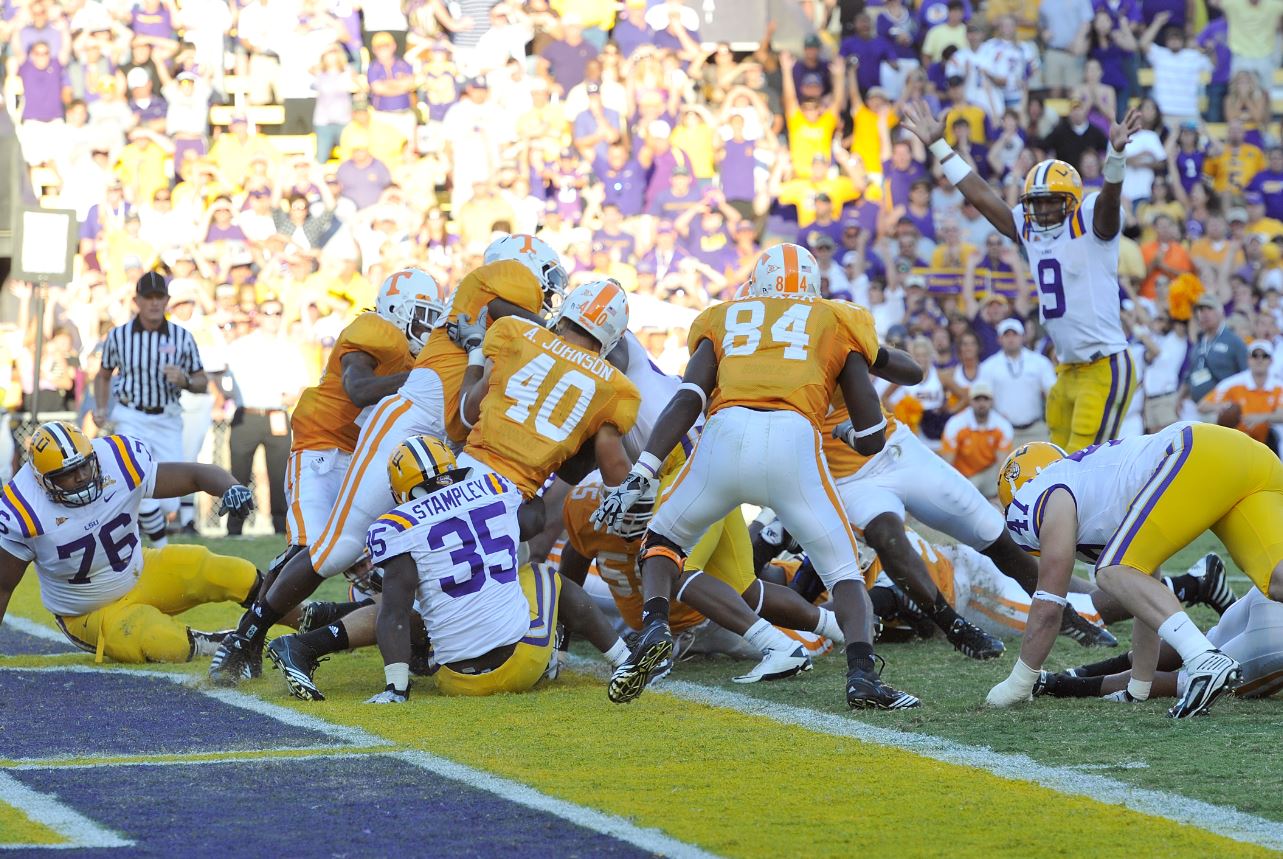 During his tenure as LSU head coach, Les Miles had a knack for winning games in unthinkable ways.

One of those occasions came on this day 10 years ago against Tennessee. It appeared as though the Volunteers were going to prevail, but a controversial penalty allowed LSU to score the winning touchdown on the game’s final play in a 16-14 victory.

LSU had defeated a pair of ranked non-conference opponents in September as it arrived in front of the home crowd in Baton Rouge on Oct. 2, 2010. Led by an outstanding defense, the Tigers were 4-0 and ranked No. 12 in the country.

Tennessee was lucky to be 2-2 entering the contest. After getting blown out by Oregon and Florida early in the season, Tennessee needed two overtimes to beat UAB at home. As time ticked away at Tiger Stadium, Tennessee appeared on the verge of a major victory.

With Tennessee leading 14-10 and 32 seconds remaining, LSU faced 2nd-and-goal from the Tennessee 2-yard-line. The Volunteers’ defense stopped LSU quarterback Jordan Jefferson a yard short of the goal line. It seemed as though LSU would have plenty of time to run another play.

With the clock ticking however, LSU elected to substitute. That gave Tennessee time to make a substitution of its own.

As the time continued to tick away, LSU was forced to rush to get a snap off. It did, but the ball got past Jefferson and was pounced on near the 20-yard-line as time expired. Tennessee had pulled off the upset.

Teams walked the field and coaches shook hands, but about a minute later, an official review took place. It was ruled that Tennessee had too many men on the field and LSU was awarded one untimed down from inside the 1.

On that play, running back Stevan Ridley took the pitch, heading left. Ridley cut back to the middle and broke the plane of the goal line for the game-winning 1-yard touchdown.

LSU doubled Tennessee’s offensive output with 434 yards to 217 for the Volunteers, but four LSU turnovers allowed the Volunteers to hang around. After three quarters, the score was knotted, 7-7.

Josh Jasper’s 31-yard field goal put LSU back in front just seconds into the final quarter. With 11:34 to go in the game, Tennessee answered on a 3-yard touchdown run by quarterback Matt Simms for its first lead.

Prior to that, all the scoring had come in the first quarter. Jefferson scored an 83-yard touchdown on the game’s first offensive play. Tennessee drew even in the final minute of the quarter on a short touchdown run by Tauren Poole.

Under first-year head coach Derek Dooley, the heartbreaking loss would begin a 4-game losing streak for Tennessee. The Volunteers would rally to win their final four regular season games to become bowl-eligible. Tennessee’s season ended with a 30-27 double-overtime loss to North Carolina in the Music City Bowl.

LSU would start 7-0 and ascend to No. 6 in the polls before falling at eventual national champion Auburn. The Tigers reached the top 5 in late-November, but closed the regular season with a loss to Arkansas. LSU topped Texas A&M in the Cotton Bowl to finish 11-2 and No. 8 in the final polls.

Of LSU’s 11 wins, its home victory over Tennessee was by far the most bizarre. Ridley rushed for 123 yards, but it was the final yard on an untimed down that decided the game. It happened on this day a decade ago.