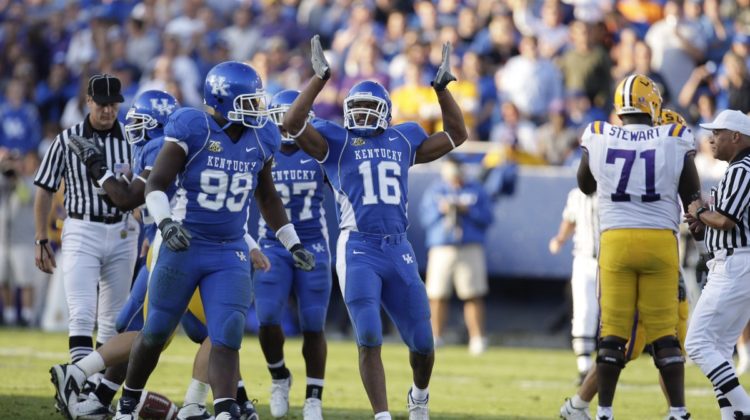 Since the inception of the AP Poll in 1936, only two 2-loss teams have claimed the national championship.

In LSU’s case, each loss came in triple-overtime. The first of those came on this day 15 years ago as Kentucky rallied to defeat the top-ranked Tigers, 43-37.

LSU was 6-0 and ranked No. 1 in the country as it arrived at Commonwealth Stadium on Oct. 13, 2007. The Tigers had already defeated three ranked teams and were coming off an emotional 28-24 comeback win over Florida.

Kentucky started 5-0, which included a win over No. 9 Louisville, but the Wildcats were coming off their first loss of the season at South Carolina. Kentucky was 5-1 and ranked No. 17. The Wildcats had not defeated an AP-ranked No. 1 team since topping Ole Miss in 1964.

LSU led by two scores on multiple occasions throughout the contest, including 27-14 midway through the third quarter. Kentucky quarterback Andre’ Woodson’s third total touchdown and second passing would cut the lead to six.

LSU’s next two drives netted just 12 total yards and ended with a punt and an interception. The Wildcats cashed in with a pair of field goals from Lones Seiber to tie the game at 27-27.

On the final possession of regulation, the Tigers were able to melt the remaining 4:21 off the clock as they marched from their own 16-yard-line to the Kentucky 40 in 13 plays. On the final snap of regulation, Colt David’s 57-yard field goal attempt sailed left and the contest went to overtime.

After a third-down penalty on LSU kept Kentucky’s possession alive in the third overtime, Woodson’s 7-yard touchdown pass to Steve Johnson put the Wildcats in front, 43-37. The missed 2-point try gave LSU a chance to win on its possession, but it would not come to that.

On 4th-and-2 from the 17, Kentucky stopped LSU’s Charles Scott a yard shy of the first down. The upset was complete.

The celebration was on in Lexington.

Despite being stuffed on the game’s decisive play, Scott led all rushers with 94 yards and two touchdowns on just seven carries as the Tigers finished with 261 yards on the ground as a team. Woodson passed for 250 yards in the win. Johnson led all receivers with 134 yards on seven catches, including two to convert third downs in overtime.

Following the win, Kentucky climbed back into the top 10, but dropped four of its next five games to close the regular season. The Wildcats finished 8-5 following a Music City Bowl victory over a depleted Florida State team.

LSU bounced back with four straight wins to reclaim the No. 1 spot in the polls, but closed the regular season with a loss at home to Arkansas. During what would be a wild 2007 season, LSU, with a lot of help, ascended to No. 2 after topping Tennessee in the SEC Championship. It closed the year by beating Ohio State for the BCS National Championship, 38-24.

Although it may change in the coming years with talks of increasing the number of teams that make the College Football Playoff, LSU remains the last 2-loss national champion. Its first defeat came in Lexington on this day 15 years ago.