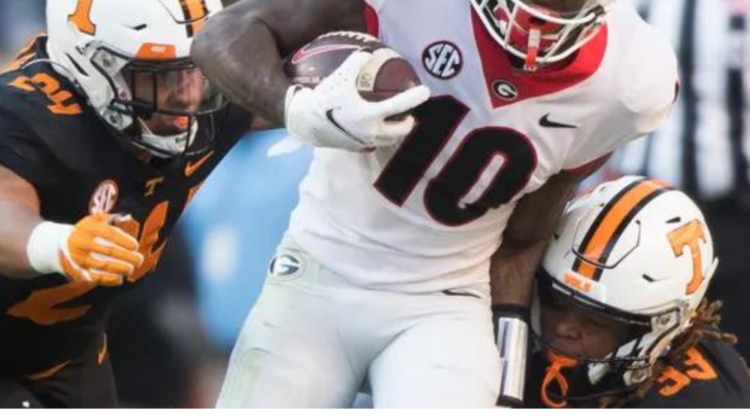 This week, the College Football Playoff selection committee unveiled its first rankings of the 2022 season. The two highest-ranked teams in the SEC will face off on Saturday afternoon on CBS.

Hear now from Boo Corrigan, chair of the College Football Playoff selection committee, as he chatted with @ESPN's @ReceDavis after the reveal of the first Top 25 rankings of the 2022 season. #CFBPlayoff 🏈🏆 pic.twitter.com/Xtl6tiIfjj

No. 1 Tennessee will come between the hedges to face No. 3 Georgia. The winner has an inside track to not only win the SEC East but to improve its chances of earning one of the four spots in the playoff.

For the first time ever in the regular season, the No. 1 AP team is facing off with the No. 1 CFP team 👀

Who will come out on top this weekend, @Vol_Football or @GeorgiaFootball? pic.twitter.com/xvnk7jV48N

The SEC West has arguably been the strongest division in college football. A lot of the praise is centered around Alabama. LSU, Texas A&M, and Auburn have all found their way into the rankings. Mississippi State and Ole Miss were actually No. 1 and No. 3, respectively, in the first-ever College Football Playoff ranking in 2014.

Since 2014 in the SEC East, only Georgia and occasionally Florida have consistently been considered to be in the national championship conversation. Kentucky has been consistent, but never great. South Carolina, Tennessee, and Missouri have played musical chairs on the 5–7 or 7–5 line and Vanderbilt has just been happy to be there.

Saturday’s contest in Athens should prove to be a heavyweight bout. The Bulldogs are an 8.5-point favorite. Here are the keys for both teams to come away with the win.

For Tennessee to win:

Tennessee is explosive on offense. Tennessee is No. 1 in the nation averaging 3.87 points per drive and leads the country with 22 plays of 40 yards or more (thanks, Stewart).

The Volunteers have been tested this season. They jumped all over LSU earlier this season in Baton Rouge and used their checkerboard home-crowd advantage to upset Alabama. Looking at last year’s game, two stats stuck out that hurt Tennessee:

this entrance or these unis?

For Georgia to win:

Smart and the Dawgs won the national championship in 2021. Smart finally learned Nick Saban’s greatest lesson: adapt or die. The lesson came to him after Georgia was boat-raced by Joe Burrow and LSU in the 2019 SEC Championship. Seth Emerson set the tone in his piece after that game and brought it out again for a piece this week previewing the game:

“If you were going to lose, the best thing may have been to endure this kind of beatdown, one that will make the program, its coaches, and everyone involved, reflect and adjust…”

Since that time, the Dawgs have transformed their offense. Offensive coordinator Todd Monken has brought in a higher-powered offense, that still has an effective running game. It makes Smart happy and look, well, smart.

Here are three keys for Georgia to come out on top Saturday.

Stat of the Week: Buyout Tracker

(last year, schools spent $94M on buyouts, believed to be a record)

$71.8 million not to coach? The seven coaches fired this year are looking to set a new record of getting paid not to work. Those salaries are still about $20 million shy of what it would take to buy out Jimbo Fisher at Texas A&M.

These are some big-name jobs open. You will start seeing action this month and the carousel going into full gear when the calendar hits December.

Auburn has the most drama surrounding it, but Arizona State and Georgia Tech are two jobs that candidates could see as an easier path to the playoff. What happened to Will Healey? He was such a hot name prior to the pandemic.

A half-point more for Michigan, another half-point for Georgia, and 2.5 more points for Ohio State and we would have been sitting at 6–4 last week. Instead, it looks worse at 3–7.

We learn. We move on. Take it away, Herm!

🎟 Texas Tech 🆚 TCU (-9.5)
📍 Amon G. Carter Stadium
⏰ 12 p.m. ET
📺 FOX
💰#DFWBig12Team
TCU is going to have to earn its way into College Football Playoff. TCU currently sits at No. 7 in the committee’s rankings. Head coach Sonny Dykes struggled in November at SMU; it’s not a good time to start at TCU.

🎟 Florida 🆚 Texas A&M (-3.5)
📍 Kyle Field
⏰ 12 p.m. ET
📺 ESPN
💰#GoGators
Ole Miss ran all over Texas A&M last week. Quarterback Connor Weigman looked good at times for the Aggies’ offense. Anthony Richardson and the Gators saw some light last week in the third quarter before Georgia took away their hopes. This one might be tough on the eyes to watch.

🎟 North Carolina (-7.5) 🆚 Virginia
📍 Scott Stadium
⏰ 12 p.m. ET
📺 ACC Network
💰#GoHeels
Drake Maye is making a case to go to New York for the Heisman Trophy presentation in December. The redshirt freshman has passed for more than 2,900 yards, 29 touchdowns, and only three interceptions. Virginia head coach Tony Elliot is struggling in year one.

🎟 Baylor 🆚 Oklahoma (-3.5)
📍 Gaylord Family Oklahoma Memorial Stadium
⏰ 3 p.m. ET
📺 ESPN+
💰#SicEm
Oklahoma has been relegated to ESPN+…Ouch. Baylor seems to be figuring out things as a team. Offensive coordinator Jeff Grimes could be in line for a head coaching job.

🎟 Michigan State 🆚 Illinois (-16)
📍 Memorial Stadium
⏰ 3:30 p.m. ET
📺 Big Ten Network
💰#Illini
The Spartans were an absolute embarrassment in the tunnel at Michigan after their loss to the Wolverines. Mel Tucker needs to hit the reboot because year three has been a mess. The Fighting Illini take full advantage.

🎟 Liberty 🆚 Arkansas (-13.5)
📍 Donald W. Reynolds Stadium
⏰ 4 p.m. ET
📺 SEC Network
💰#Liberty
Hugh Freeze just got a big payday from Liberty. Auburn seems flush with money. Freeze comes back to his SEC West foe and pulls off the upset and gets another referral for the folks on “The Plains.” 🎟 Alabama (-13.5) 🆚 LSU
📍 Tiger Stadium
⏰ 7 p.m. ET
📺 ESPN
💰#RollTide
Alabama and LSU got bounced from CBS for the second year in a row. LSU has had a nice first season under Brian Kelly. Alabama exposes the gap that Kelly must work to fill.