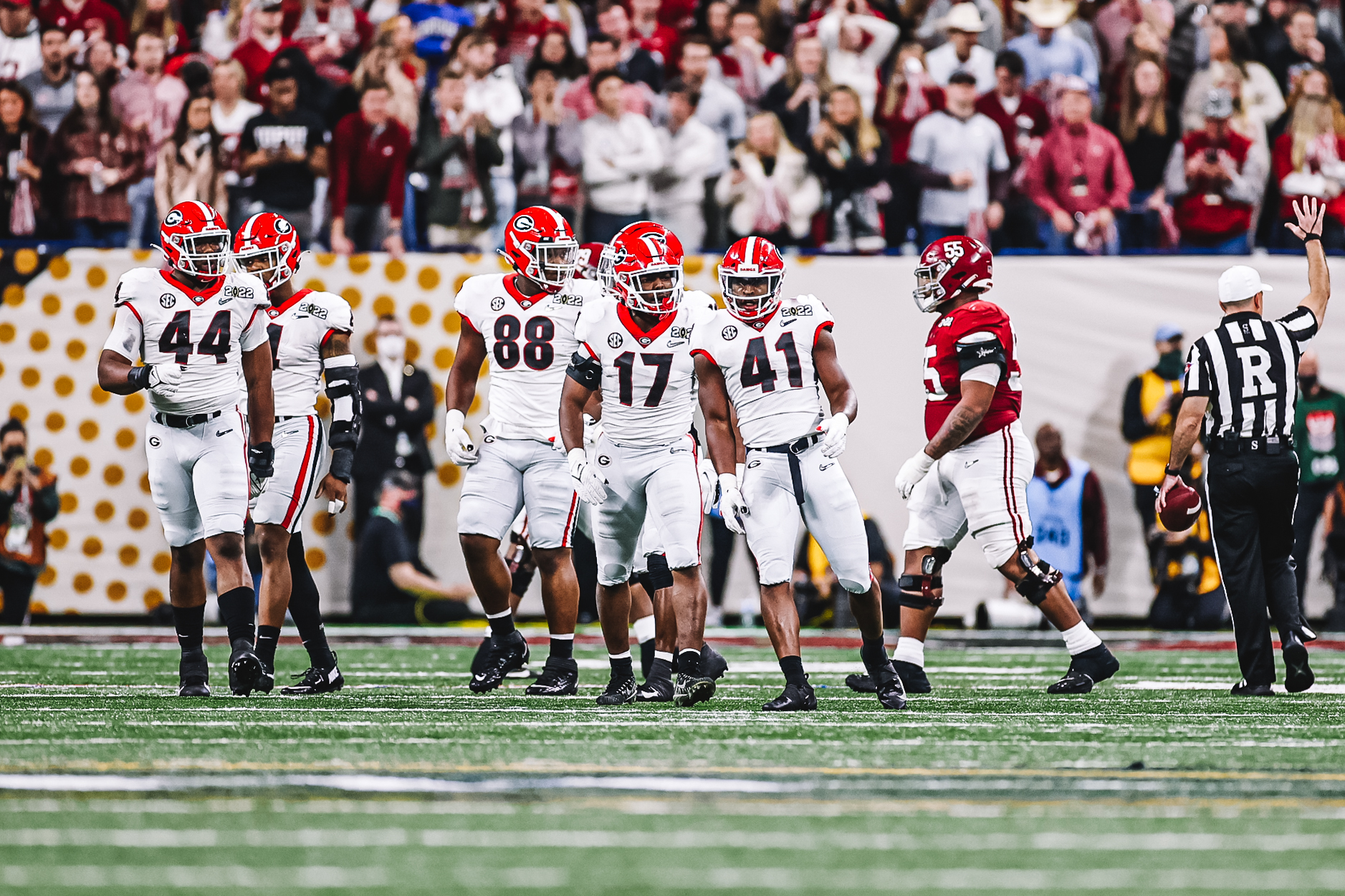 INDIANAPOLIS – For 41 years, the University of Georgia has had to sit back and watch as other teams, schools, and fan bases celebrate on the biggest stage. It would not be until 2017 when the Bulldogs would get their opportunity to claim the hardware.

In a matchup that did not disappoint, Georgia had to sit back and watch yet again. This time however, it would have to watch the celebration from the front row in its own backyard. Watch was all the Bulldogs could do as Alabama and Nick Saban would claim yet another national championship as the Crimson Tide erased a 13-0 deficit to beat the Bulldogs in overtime in Atlanta, 26-23.

The Bulldogs saw their national championship bid dissolve right before their eyes as Tua Tagovailoa threw a perfect 41-yard scoring strike to DeVonta Smith to give Alabama the 2017 title. Not knowing when their opportunity would return, Georgia head coach Kirby Smart said one thing after their loss. One thing that stuck: “We’ll be back”.

It did not take long for the Dawgs to get back. In a 2021 season that started with a national championship-caliber win, it only seemed right it would end with one. In a story all too familiar to Georgia and her faithful, the Dawgs would face Saban and his Crimson Tide in Indianapolis.

Alabama had ruined Georgia’s national title hopes in 2017. A little more than a month ago, it ruined the Bulldogs’ perfect season with a 41-24 victory in the SEC Championship.

This time however, there was no sitting back and watching.

Led by former walk-on quarterback Stetson Bennett, the Dawgs choreographed a masterful fourth quarter. Georgia outscored Alabama 20-9 in the period. After two touchdown passes from Bennett, the exclamation point came on a 79-yard interception return for a touchdown by Kelee Ringo.

After more than four decades, Georgia had its third national title, 33-18.

All season long, this Georgia team has been defined by its defense. It was a defense that led the nation in almost all major categories — a defense that started this very season with a game-sealing pick-6 vs. Clemson. However, when it was needed the most, it was Georgia’s offense that stepped up.
In a game of field goals and suffocated drives early, the Bulldogs found themselves in a crunch situation. Down by five with 10 minutes to go, Bennett led a long march and gave Georgia the lead with a 40-yard rainbow to Adonai Mitchell for a touchdown.

Georgia led 19-18. It was a lead the Dawgs would not surrender.

“This was a guy who wasn’t even on our quarterback board to start the season,” Smart said of Bennett.

Buried deep on the depth chart, many in Georgia had anticipated that Bennett’s career was over. But pushed by an unwilling determination and aided by an injury to JT Daniels, Bennett found himself in familiar shoes: as Georgia’s starting quarterback.

He was asked about his thoughts on a new title — national champion.

“It sounds pretty awesome to me,” Bennett said.

With 224 passing yards and two touchdowns, Bennett was named the Offensive MVP. In a star-studded cast with names like George Pickens, Zamir White, and Brock Bowers, it was Bennett whose star finally shined brightest. A lonely walk-on from Blackshear, Ga. was the man to topple the mighty Tide.

So, party like it is 1980, Athens. For the first time since, your Bulldogs are the national champions of college football.