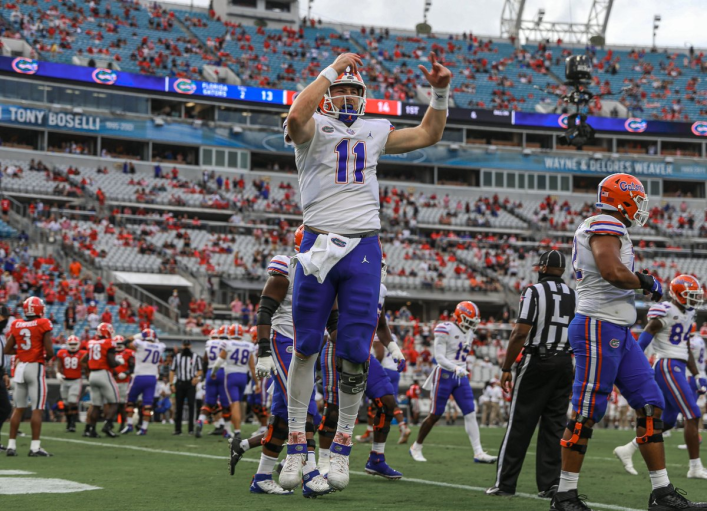 Florida was unable to win its first SEC title since 2008, but the No. 7 Gators are in a New Year’s Six bowl for a third straight season.

Florida will take part in the Cotton Bowl against No. 6 Oklahoma. The Sooners held off Iowa State to win the Big 12 for a sixth straight season last week. Oklahoma comes in with a record of 8-2 while Florida is 8-3.

The teams will be headlined by their high-flying offenses when they meet in Dallas on Wednesday. Both schools ranked in the top 20 nationally in both scoring and total offense.

That potent offense for Florida will be short-handed. The good news is that quarterback Kyle Trask is expected to play. Trask, expected by many to win the Heisman Trophy, led the country this season with 4,125 passing yards and 43 touchdown passes.

Trask will be without standout tight end and possibly leading receiver Kadarius Toney for the Cotton Bowl. The Gators will likely need a strong offensive effort to win.

Led by quarterback Spencer Rattler, Oklahoma led the Big 12 in total and scoring offense. Running back Rhamondre Stevenson and wide receiver Marvin Mims are two skill players to watch for the Sooners. Those two combined for 14 touchdowns this season.

Defensively, Oklahoma has the statistical edge. The Sooners ranked second in the Big 12 in total defense and third in scoring defense. Florida was in the middle of the pack in the SEC, but comes in having given up an average of 44.5 points in its last two games.

Defensive back Kair Elam and linebacker Ventrell Miller are probably Florida’s best two defensive players. Their status for the Cotton Bowl is unknown.

Star cornerback Tre Brown has opted out for Oklahoma. The Sooners however, should have Isaiah Thomas and Nik Bonitto available. Those two combined for 15.5 sacks this season.

This will be just the second meeting between Florida and Oklahoma. The Gators scored 10 fourth-quarter points in Miami to beat the Sooners for the BCS National Championship to conclude the 2008 season, 24-14. Wednesday’s contest begins at 8 p.m. ET and will air on ESPN.

Cheez-It Bowl: No. 21 Oklahoma State (7-3) vs. No. 18 Miami (8-2)
Tuesday, Dec. 29 at 5:30 p.m. ET (ESPN)
This year’s Cheez-It Bowl in Orlando will feature two teams that spent a lot of time in the top-10 before late-season fizzles. Miami has lost nine of its last 10 bowl appearances and has failed to score a touchdown in each of its last two. Both teams rank in the top 10 nationally in tackles for loss.
Prediction: Oklahoma State 31, Miami 29

Tampa Bay Buccaneers (9-5) at Detroit Lions (5-9)
Saturday, Dec. 26 at 1 p.m. ET (NFL Network)
After rallying from 17 points down to beat the Atlanta Falcons last week, the Tampa Bay Buccaneers can clinch their first playoff berth since 2007 with a win. Quarterback Tom Brady’s team hasn’t missed the playoffs since 2008 when he was a member of the New England Patriots. Brady was injured for the duration of that season.
Prediction: Tampa Bay 37, Detroit 24

Miami Dolphins (9-5) at Las Vegas Raiders (7-7)
Saturday, Dec. 26 at 8:15 p.m. ET (NFL Network)
The Miami Dolphins will have their first winning season since 2016, but may need to win out to make the playoffs. Since a 6-3 start, the Las Vegas Raiders have lost four of their last five. There is a decent chance that backup quarterback Marcus Mariota will get the start for Las Vegas against Miami.
Prediction: Miami 27, Las Vegas 22