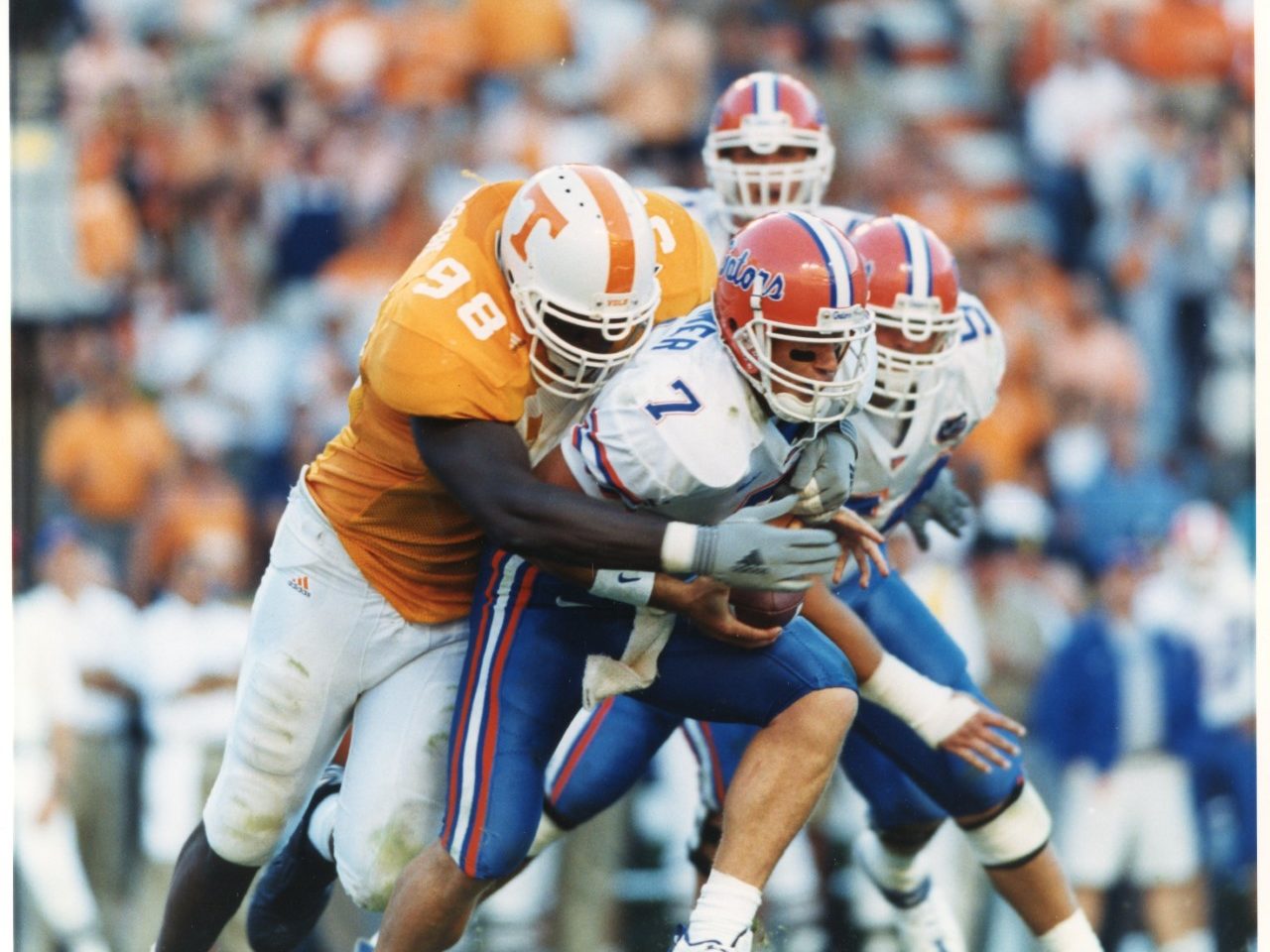 Controversial calls are a part of college football. That was even more of the case before there was instant replay reviews.

It was a controversial call that ultimately decided the SEC East’s most important rivalry of the 1990s on this day 20 years ago. Jabar Gaffney was awarded the winning touchdown with seconds to play as Florida outlasted Tennessee in a top-15 match-up, 27-23.

Tennessee and Florida had combined for two of the previous four national championships and had combined to win the SEC East every year since the institution of a conference championship game as the teams got set to square off in Knoxville on Sept. 16, 2000. During the 1990s however, the rivalry was dominated by the Gators.

During the decade, Florida went 7-3 against the Volunteers. The sixth-ranked Gators had come in as winners of six of the previous seven in the rivalry. They came in with a record of 2-0 while Tennessee was 1-0 after opening the year with a tough 19-16 win over Southern Mississippi.

No. 11 Tennessee had led by as many as nine that day and needed just one stop in the final seconds. That was not to be.

Things looked to be shaping up well for Tennessee to beat the Gators at Neyland Stadium for a second straight time. With 2:14 on the clock and the Volunteers leading 23-20, David Leaverton’s punt had pushed Florida back to its own 9-yard-line.

134 seconds and 91 yards would be no problem for Steve Spurrier’s “Fun ‘n’ Gun” offense. Florida quarterback Jessie Palmer completed fewer than 50 percent of his throws for the day, but on the final drive, he was money. Palmer finished with 290 yards passing.

After a pair of short completions, Palmer found Gaffney for 33 yards to move into Tennessee territory. A pass interference call on the Volunteers moved Florida inside the 30-yard-line. Following a pair of incomplete passes, the Gators faced a critical 3rd-and-10 with less than a minute remaining.

A swing pass to Bo Carroll moved Florida inside the 5-yard-line. On the very next play, Palmer fired for Gaffney.

The pass went into Gaffney’s hands in the end zone before being knocked away by Tennessee’s Willie Miles. The officials however, ruled that Gaffney had possession of the ball before it was knocked away. With 14 seconds left, Florida was in front, 27-23.

Tennessee finished with 340 yards to 329 for Florida, but a defensive score played a major role. Trailing 12-10 early in the third quarter, Lito Sheppard returned a Suggs interception 19 yards to give Florida its first lead.

Tennessee answered with a 1-yard touchdown run by Travis Henry later in the quarter. That was followed by a successful 2-point conversion to give the Volunteers a 20-17 lead after three quarters.

Alex Walls’ school-record tying fifth field goal pushed the lead to six in the fourth quarter before Jeff Chandler answered with his second field goal of the day for Florida. The first half featured four Walls field goals sandwiched around a touchdown run by Florida’s Ernest Graham as the Volunteers took a 12-7 lead into the locker room.

With the victory, Florida would ascend to No. 3 in the polls. The Gators however, would lose their next road game two weeks later at Mississippi State.

From there, Florida would run the table in the SEC before falling to Florida State in the regular season finale. The Gators bounced back to beat Auburn for the SEC crown, but ultimately fell to Miami in the Sugar Bowl.

Tennessee would start 0-3 in SEC play before winning its final six regular season games. The Volunteers lost to Kansas State in the Cotton Bowl to close the year, finishing 8-4 and outside the AP top 25 for the first time in 12 years.

Those in Knoxville can only wonder how the year might have been different had the Volunteers held on against Florida. That heartbreaking loss came on this day two decades ago.