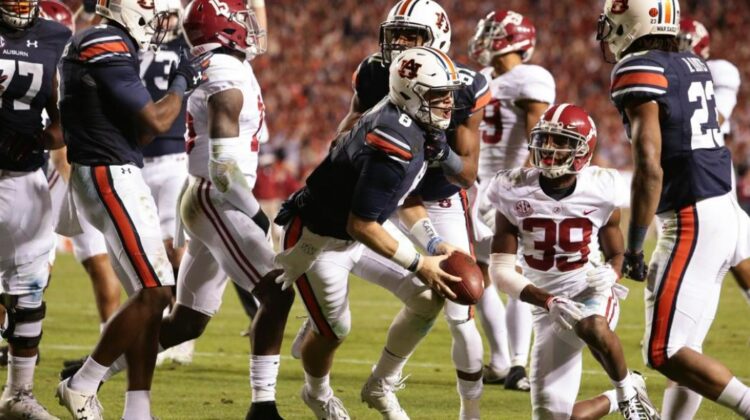 Under head coach Nick Saban, Alabama has won six national championships. It, however, has just two perfect seasons during that span.

One might argue that it would have two more without losses at Jordan-Hare Stadium. One of those came on this day five years ago.

Ranked No. 6, Auburn was 9-2 and needed just a win over Alabama to win the SEC West. That’s exactly what it would get.

Daniel Carlson’s field goal on the final snap of the first half gave the Tigers a 10-7 lead at the break, but Alabama needed just 98 seconds to retake the lead in the third quarter. Bo Scarbrough’s 21-yard touchdown run put Alabama back in front 14-10, but that would be its final score of the day.

The next two drives for Alabama ended on downs.

Johnson rushed for 104 yards and also threw a touchdown in the victory. Stidham passed for 237 yards while Ryan Davis led all receivers with 11 catches for 137 yards. Alabama rushed for 211 yards, but could get nothing going through the air.

The Crimson Tide would still get a playoff berth. After topping Clemson in the Sugar Bowl, Alabama rallied to beat Georgia in an overtime thriller for the national championship, 26-23.

While the loss to Auburn didn’t keep Alabama from winning a national championship, it did end its SEC title hopes. That upset came on this day five years ago.