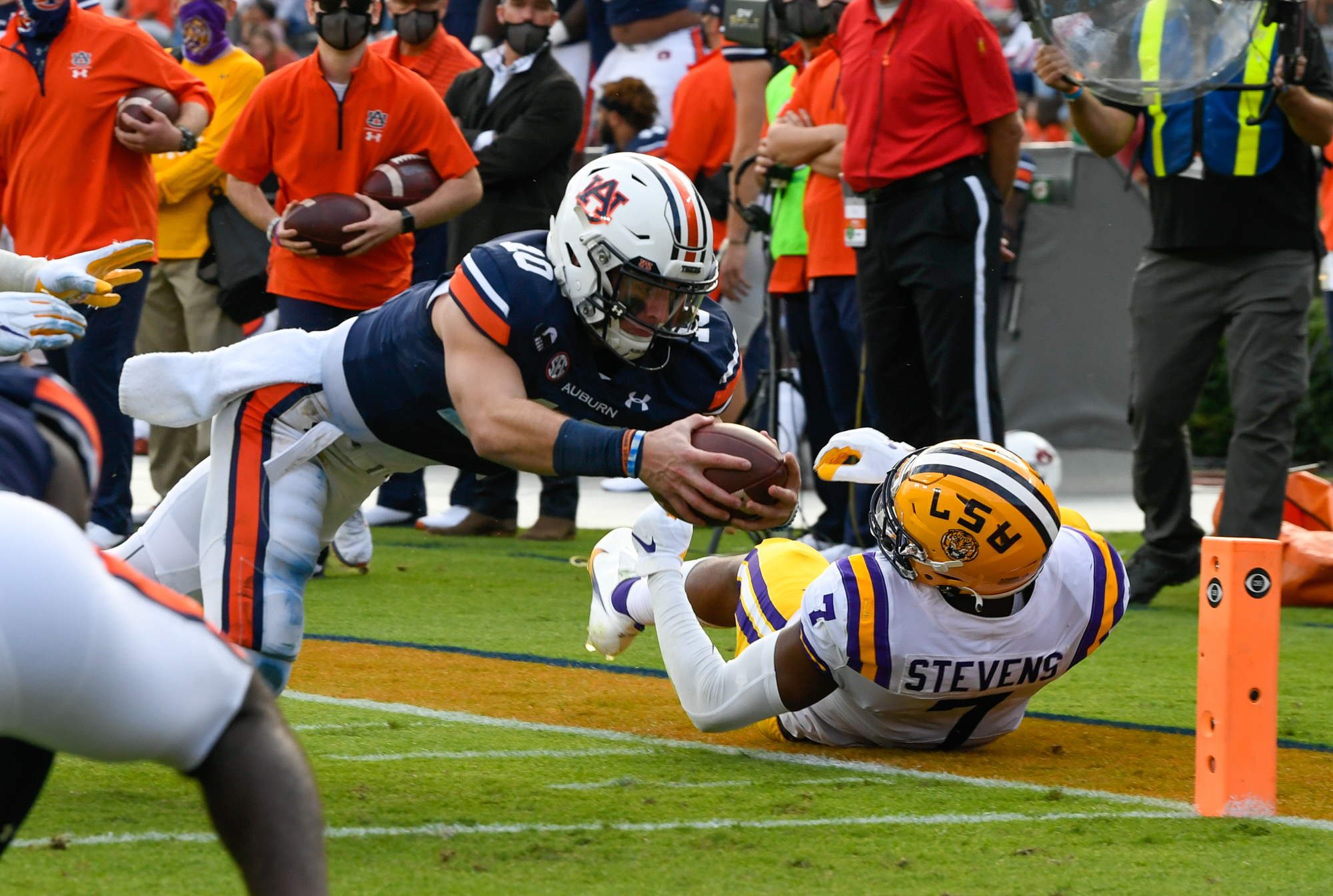 Bo Nix has been the guy at quarterback for Auburn for two years now.

There have been the highest of highs in those two years, but there have also been the lowest of lows. His lack of consistency led to many people speculating that his job may be in trouble.

That speculation grew even more when Auburn added TJ Finley, who started five games as a freshman for LSU last season. Like Nix, Finley flashed some serious potential but also struggled mightily at times as a freshman. As we inch closer to Week 1, Auburn has a big question that must be answered:

Who will start for the Tigers behind center?

As previously noted, Nix has two years of starting experience in the SEC, which is starting to become a rare commodity. On top of that, there is the hope that he can finally tie things together in a new offensive system. Former head coach Gus Malzahn’s offense proved to be elite at times, but quarterback development was a huge thorn in his side.

Nix joined the family of numerous highly-rated quarterback recruits to not reach their full potential under Malzahn. A lack of talent on the offensive line and inconsistency at wide receiver also made things increasingly difficult for Nix.

One could argue that Nix simply isn’t an accurate passer or a good decision maker. He has had the tendency to panic when things break down which causes him to bail out of the pocket and force throws. Still, few could argue his ability.

He is an elite runner, which has probably where he has been most impressive over the years. When he stands tall in the pocket and sets his feet, he can put some zip on the ball and make any throw on the field. There are also people who have praised Nix for how he has handled things off the field. He is always itching to get better and continued to be a leader.

This fall, reports suggest that Nix has still had issues with his pocket awareness and forcing throws. Those forced throws have resulted in turnovers. However, there is one thing he has been doing in camp that we haven’t seen before — producing explosive plays. Things could obviously be a lot different when the season actually begins, but maybe it is a sign of things to come.

A lot of Nix’s job security will come down to how patient the new coaching staff is. This is Nix’s job to lose, but now Auburn has a formidable backup.

So what will happen when things aren’t going Nix’s way? Are the Tigers going to turn to another viable option at quarterback? Or are they going to let him play through his mistakes?

Regardless, these are questions to watch throughout the season.

Between the two, Nix probably has the most ability. He has all the tools; it’s just about putting it all together. Can he finally do that under new head coach Bryan Harsin and offensive coordinator Mike Bobo?

That remains to be seen.

As far as experience is concerned, Finley has far less than Nix. Still, five games of starting experience in the SEC is not something to ignore. As a freshman, Finley was thrown into the fire after a season-ending injury to Myles Brennan.

Immediately, Finley flashed some serious potential. He had a huge game against South Carolina in his debut. In that game, Finley finished with 265 yards, two touchdowns and completed 17 of 21 passes.

Finley struggled at times throughout the rest of his season. He had rough games against Auburn and Texas A&M, but had another good night against Arkansas. As a decision maker, Finley has a long way to go, which is OK for a young signal caller.

As far as arm talent is concerned, he might have Nix beat. He has a lightning quick release and can fit the ball into tight windows. To make things better for Finley, he is probably a better scheme fit for the new offense. Harsin and Bobo have worked better with pure passers at quarterback, and that is what Finley is.

It was always going to be tough for Finley to win the job starting out. After all, he didn’t arrive in Auburn until the fall. Reports say that Finley has blown expectations out of the water, and at the very least, has made things interesting.

The new staff has loved the way he throws the football, which is not a huge surprise. In a scrimmage setting, Finley has turned the ball over less than Nix. Granted, he also hasn’t produced as many explosive plays as Nix,

If Finley can get better from a decision-making standpoint, then Nix’s job might actually be in jeopardy. If Finley doesn’t win the job at some point, it won’t be because of his physical tools.

Nix will win the job — at least for the season opener. Again, having two years of experience in the SEC is huge. The team recognizes him as a leader, and so does the coaching staff.

He has presented himself with confidence despite struggles, which has won a lot of people over. On top of that, he has more to bring to the table than Finley does from a tools standpoint.

Yes, Finley has a live arm, but so does Nix. Nix also has the ability to create and extend plays with his legs.

If Nix struggles, Auburn won’t be hesitant to turn to Finley. Regardless, both quarterbacks have tons of ability; it is just about who can put it all together.

We will know more when Auburn travels to Penn State on Sept. 18. Until then, it is mere speculation.