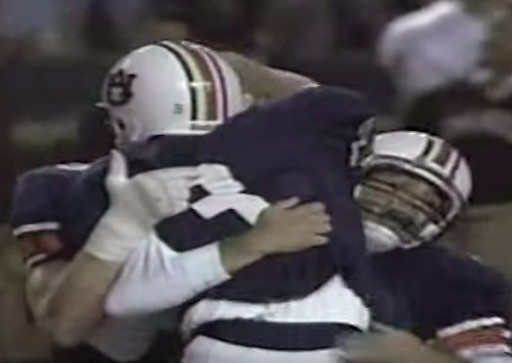 The last meeting between Florida state and Auburn certainly had a memorable finish, but that was also the case on this day 30 years ago.

Less than two years after meeting in a Sugar Bowl thriller that ended in a Deion Sanders interception, Auburn got revenge. In a battle of top-10 teams, Jim Von Wyl kicked a 39-yard field goal with two seconds remaining to lift the Tigers to a 20-17 victory.

Auburn was 5-0-1 and ranked No. 5 as it arrived at Jordan-Hare Stadium on Oct. 20, 1990. The lone tie for the Tigers came against Tennessee in a contest where they trailed by 17 in the fourth quarter.

For most of the game, Florida State was in front. The Seminoles led by as many as 10 in the second half, but after a failed “fumblerooskie”, Auburn took over near its own 45-yard-line with less than seven minutes remaining, down 17-10.

It took Auburn less than four minutes to draw even as Stacy Danley capped a 57-yard drive with a 2-yard touchdown with 3:47 to play. The Tigers settled for the extra point and a 17-17 tie.

The ensuing FSU possession reached the Auburn 35-yard-line, but a loss of two on third down left head coach Bobby Bowden with a decision to make. Facing 4th-and-5 from the Tigers’ 37, the Seminole offense stayed on the field. Unfortunately, quarterback Casey Weldon couldn’t buy enough time as he was sacked for a loss of 22 yards by linebacker Ricky Sutton.

With 1:04 remaining, Auburn started at the FSU 41-yard-line. The Seminoles held the Tigers to just two yards on the first three plays, but unlike FSU, Pat Dye’s offense came through on fourth down. On 4th-and-8, Stan White found Herbert Casey for a gain of 21 yards.

Two plays later, Von Wyl was sent on to try the winning field goal with six seconds remaining. His kick stayed just inside the left upright with two seconds left as Auburn prevailed, 20-17.

With less than two minutes to play in the half, Weldon found running back Amp Lee for a 48-yard touchdown. Von Wyl’s 37-yard field goal late in the third quarter pulled the Tigers to within a touchdown.

The loss essentially ended Florida State’s national title hopes while keeping Auburn’s alive. Auburn ascended to No. 2 with the win, but after slipping past Mississippi State, dropped three of its final four regular season games. The Tigers beat Indiana in the Peach Bowl to cap the year and finish in the top 20.

FSU would not lose again. The Seminoles won their final six games, which included a win over Penn State in the Blockbuster Bowl. FSU finished No. 4 in the final polls. It may have been higher if not for a last-second loss that happened on this day three decades ago.