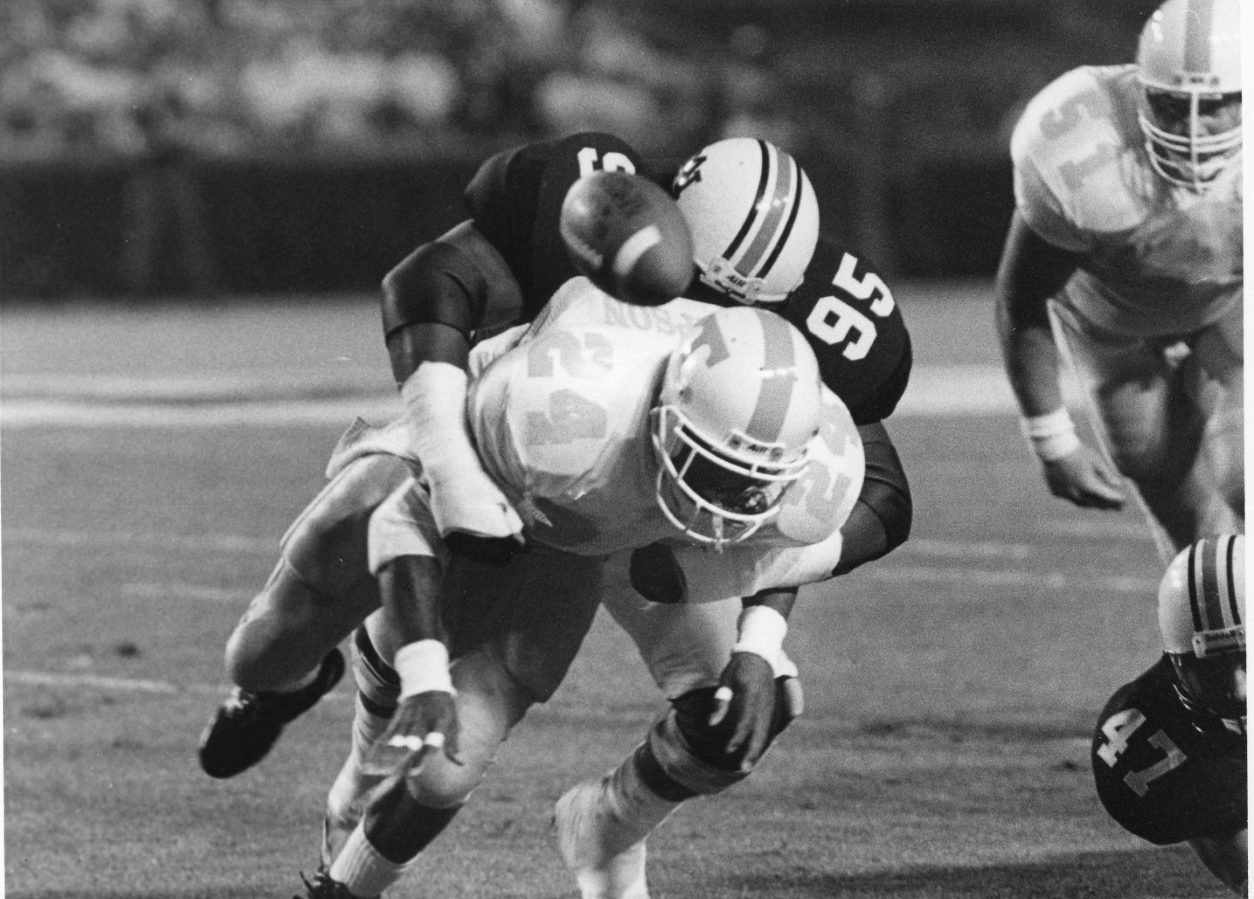 In 1990, the SEC still only had 10 teams. The conference was two years away from becoming the first to add a championship.

On Sept. 29, 1990 however, many thought the SEC might be decided as No. 3 Auburn and No. 5 Tennessee met at Jordan-Hare Stadium for a top-5 showdown. For much of the day, Tennessee seemed in control. On this day 30 years ago however, Auburn made a furious rally to force a 26-26 tie.

After scoring the game’s final 14 points to force a tie with Colorado in the Pigskin Classic, Tennessee rolled through its competition. The Volunteers arrived in Auburn with a record of 3-0-1. Tennessee had beat Pacific, Mississippi State and UTEP in the previous weeks by a combined 151-14 margin.

Auburn was 2-0 after wins over Cal State Fullerton and Ole Miss. The year prior, Tennessee had handed the Tigers their lone SEC loss.

It looked as though Tennessee wasted little time putting the nail in Auburn’s coffin early in the fourth quarter. Just five seconds in, Greg Amsler took quarterback Andy Kelly’s pitch seven yards for a touchdown to give Tennessee its biggest lead of the game, 26-9.

The Volunteers however would not score again. After Jim Von Wyl’s second field goal cut the lead to 14, Auburn moved to within a touchdown when redshirt freshman quarterback Stan White hit Dale Overton for a 13-yard touchdown.

White finished with 338 yards passing and three second-half touchdowns, but with two minutes to go, it appeared Auburn’s comeback was on the verge of falling short. The Tigers faced 4th-and-10 from the Tennessee 11-yard-line when White fired a pass into a crowd. Greg Taylor was able to make a leaping catch in front of Tennessee’s Dale Carter for the score.

After failing on a 2-point conversion earlier, Auburn elected to kick the extra point to tie the game. With 1:56 to go however, there was still time for the Volunteers.

After a scramble for a first down by Kelly, the quarterback found Carl Pickens to move the ball into Auburn territory. That was followed by a completion to Alvin Harper, which was accompanied by a personal foul on Auburn. The Volunteers were in the red zone and melted the clock to set up kicker Greg Burke.

Burke was 2-for-2 on the day as he lined up for a 34-yard field goal attempt. Burke had made his first two kicks, but the third attempt sailed wide left with 15 seconds to play. Auburn ran out the clock and the teams settled for the 26-26 tie.

Tennessee was able to build a 19-3 halftime lead on Amsler’s first of two rushing touchdowns and an 82-yard scoring strike from Kelly to Harper. Burke added two field goals to just one for the Tigers in the first half.

Auburn’s first touchdown of the day came in the third quarter when White found Taylor for a 34-yard score with less than six minutes remaining. The 2-point try however, was failed.

Auburn would win its next four games and ascend to No. 2 in the country. Unfortunately for the Tigers, they dropped three of their final four regular season games before knocking off Indiana in the Peach Bowl.

Tennessee’s win over Auburn in 1989 would cost the Tigers a berth in the Sugar Bowl. Although the 1990 contest resulted in a tie, it would cost Tennessee an SEC title. The Volunteers handed SEC champion Florida its only loss, but at 5-1-1 in SEC play, finished a half-game back in the conference.

The difference? The tie that took place on this day three decades ago.