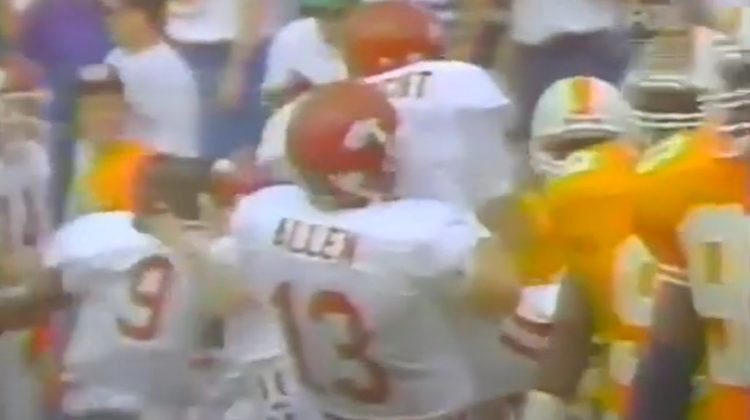 Arkansas has yet to win the SEC, but it has won the West division three times. Its first season as a member, however, was hardly one to remember.

While Arkansas went just 3-7-1, there were some memorable moments, including the one that took place on this day 30 years. A late punt return, onside kick and long field goal helped the Razorbacks complete an improbable comeback over No. 4 Tennessee in Knoxville, 25-24.

Tennessee was a perfect 5-0, which included wins over ranked Georgia and Florida teams. Ranked No. 4 in the country, the Volunteers were coming off back-to-back shutouts over Cincinnati and LSU. Tennessee arrived as a 21-point favorite.

Things started well for Arkansas. With the help of a 50-yard touchdown pass from Barry Lunney Jr., a true freshman quarterback making his first start, to Ron Dickerson, the Razorbacks raced to a 16-7 lead.

By the fourth quarter, however, it appeared as though reality had set in. Tennessee quarterback Heath Shuler’s second rushing touchdown put the Volunteers in front 24-16 with less than 11 minutes to go.

Tennessee was methodically trying to run out the clock late, but a holding penalty that negated a Shuler scramble for a first down gave Arkansas new life. With 2:28 left, Orlando Watters weaved his way through Tennessee players for a 71-yard punt return for a touchdown. The tying 2-point conversion try, however, was no good.

Needing an onside kick to keep its hopes alive, Arkansas kicker Todd Wright executed perfectly, and the Razorbacks recovered and took over near midfield.

Again, things looked bleak as Arkansas faced 3rd-and-16, but a 22-yard strike from Lunney to Tracy Caldwell moved the Razorbacks inside Tennessee’s 40-yard-line. The two connected again for 12 yards to put the Razorbacks in field goal range. With just two seconds left, Wright tucked one inside the right upright from 41 yards out to give the Razorbacks the lead and the unlikely victory.

Lunney finished 13-for-19 with 168 yards in the win. It was Wright’s fourth field goal of the day.

For Tennessee, the upset loss began a 3-game losing streak, which ultimately cost the Volunteers the SEC East crown. Tennessee did bounce back to close the year on a 4-game winning streak to finish 9-3 and No. 12 in the country in what would be head coach Johnny Majors’ final season at the helm.

While Arkansas finished just 3-7-1 in its first season in the SEC, it did go 3-4-1 in conference play. No. 4 Tennessee became the highest-ranked team to lose to Arkansas since No. 1 Texas in 1964. That defeat in Knoxville came on this day three decades ago.