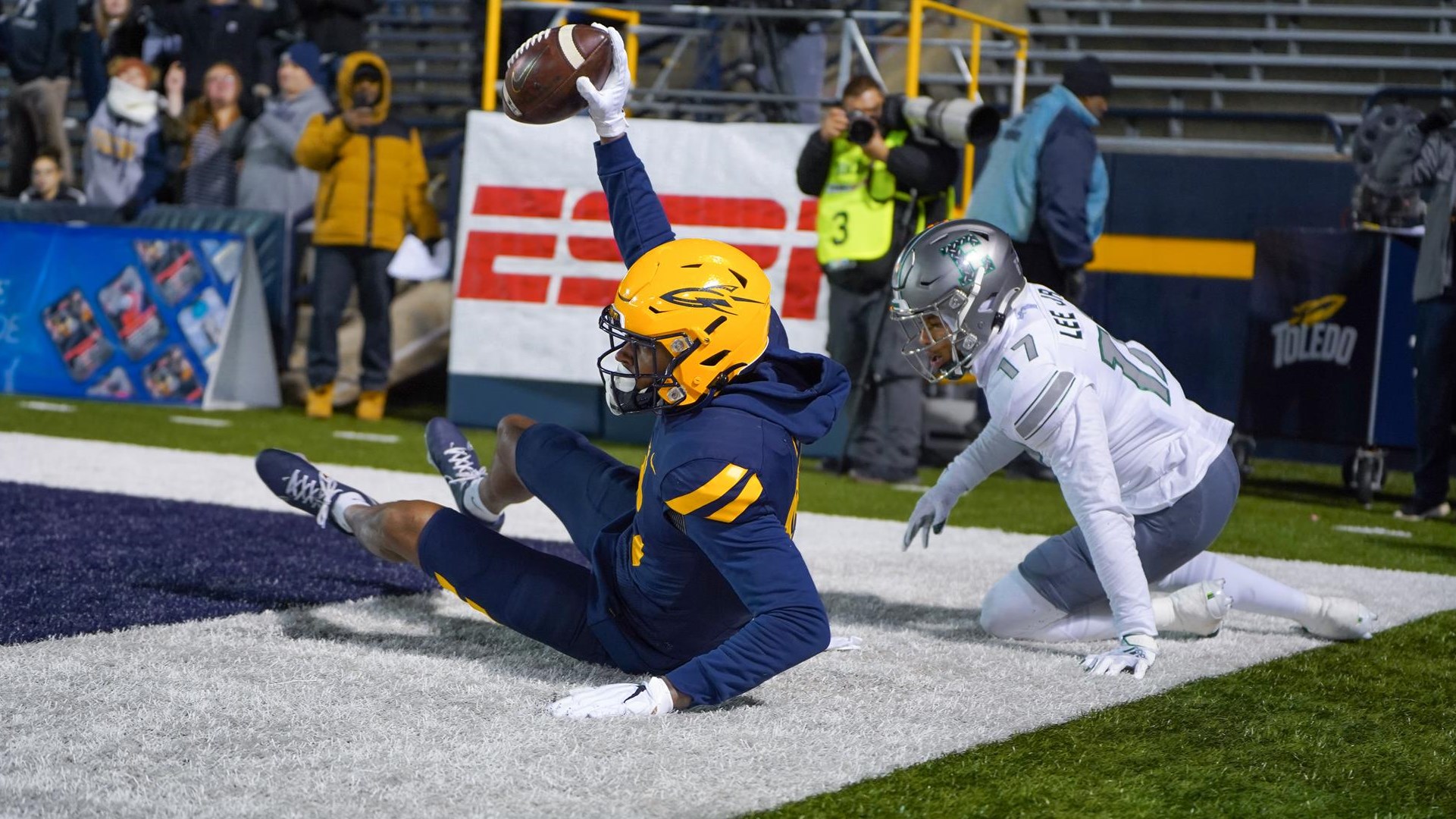 While there is proven talent in the room, there is no Treylon Burks. Alongside that dilemma, freshmen make up a good chunk of the room. Head coach Sam Pittman and Co. set out to address the issue.

The transfer portal then brought about a name familiar to Pittman. Matt Landers, who spent some time at Georgia, made his decision to transfer. He became Arkansas’ most recent transfer upon his decision.

Following one season at Toledo, Landers’ name once again had substance. His efforts were recognized by plenty of high-level schools. Ultimately, Landers chose to fight for a starting spot in Fayetteville.

He hails from St Petersburg, Fla. as a member of the 2017 recruiting cycle. While not your typical four- or five-star world beater on paper, Landers had plenty of attention. His size and ability were enough to rack up 24 total offers.

According to the 247Sports Composite, he was rated a top-700 player nationally. Based on position, he was ranked as the 98th-best wideout. Lots of it was potential-based.

The 6-foot-5 athletic frame and even larger wingspan brought the wide eyes. Having above average speed for his size didn’t hurt either. Simply put, he’s a certified athletic freak when healthy.

Landing in Athens as a freshman, he had little opportunity as part of a loaded wide receivers group. It was a dog fight for every player. Not playing as a freshman turned into a benefit.

The extra learning experience led to production in 2019. Appearing in 12 games, he caught 10 passes for 105 total yards and a touchdown.

The 2020 COVID-19 season brought woes for Landers. Injuries became the second plague. While managing nine game appearances, he tallied only two catches for 27 yards. He was eventually lapped on the depth chart and sought to transfer.

At Toledo, Landers caught 20 balls for 514 yards in seven games. A deep threat, he also caught five touchdowns. Who knows how many yards he could’ve compiled with all 13 games under his belt?

Either way, his abilities had been proven once more to the world. It called for a big receiver like Landers to return to the SEC. Listed as a senior, Landers has two years of eligibility remaining.

For a receiver to be successful, it starts with the feet. Having hands certainly matters, but natural agility below the waist is phenomenal. Despite being 6-5, Landers has it.

Before one can run with the ball, he must possess it first. As footwork relates to route running, that’s what will be identified. Landers’ curl routes — his primary route as an outside target — are what stand out first.

That will certainly improve his standing with Cade Fortin, the South Florida transfer. The ability to make quick rotations on his pivot foot is where it lies. His frame doesn’t bend a lot to fake a direction. It can make some motions seem stiff above the waist. While not sounding ideal, it’s the perfect storm.

Landers can just flat outplay his defender. The desire to finesse is aided by his head fakes moreover. Simply having minor head twitches can send a defensive back one step in the wrong direction.

One step away is all Landers needs with his pivot ability. He also has reliable hands. Even when his head fakes fail, his size reigns supreme.

It isn’t easy for an average defensive back to break on the likes of Landers. That was evident during MAC play while at Toledo.

Excellent Footwork With the Ball

The same ability to pivot on a dime transitions to turning back up the field also. Getting north and south after catching a curl is crucial. It can be the difference between an eight-yard gain or a 30-yard catch and run.

While it was minor, the screen game has also been utilized. Catching a ball two yards behind the line and turning up field seemed effortless for Landers. It’s surprising that he wasn’t used in the screen game more.

Twitchy players with a knack for getting north are perfect candidates. His frame running downhill just adds to the fire. Adding more positive weight in Arkansas’ strength program creates the glorious unknown. While his ability won’t reflect Christian Kirk’s, it should be respected as such.

With the ball in his hands, Landers can make defenders look bad. For someone 6-5, he has excellent moves. Watch Toledo’s contest against Eastern Michigan from 2021 and one will see Landers’ full arsenal on display.

Three catches of at least 80 yards in 2021 is a testament to his acceleration ability. In each case, Landers beat a high safety. With a lack of teams willing to press Landers, he’s able to go to work immediately.

Landers just gets to run his routes. Skinny posts and vertical routes have both resulted in long touchdowns. Getting to the third level of the defense, Landers becomes an extremely dangerous player and a tall coverage task for opposing safeties.

On curl routes, Landers accelerates away impressively. On shorter passes, he can be more difficult to tackle.

Defenders often miss his core when his acceleration is timed correctly. That’s why many teams have no option but to confront his speed. Any underneath route is met by swarming defenders. The magician that he is, Landers can still cause damage.

Confronting his speed by swarming his face aids his cuts and hesitation moves. When sprinting up field right into a decelerating corner, a step back or hesitation is viable. As mentioned earlier, his long strides create large steps.

Landers can find a ball in the air as well. With his height, it’s not unexpected that he would have a large catch radius. There is one catch Landers put on display that’s worth noting.

During Toledo’s Bahamas Bowl matchup with Middle Tennessee, managing just one step on the safety proved no issue. Quarterback Dequan Finn put a ball where only someone of Landers’ size would be able to grab it. Being slightly off balance, he managed to tip the ball ahead of himself.

Somehow, he was speeding up during the process. The safety was left to watch from the turf while Landers juggled the ball before making the catch and going the rest of the way for a 90-yard touchdown.

When a ball is thrown on target to Landers, it can look effortless. His ability to quickly pivot translates to his body control in the air. While he isn’t a body contortionist, he does what is necessary.

Sticking to the fundamentals as a big target is great. Understanding that his body can overpower most defenders once he’s in the air is something he seems to understand. The knock on Landers is that he doesn’t get airborne enough.

Landers doesn’t seem all that comfortable getting vertical. That’s certainly an area to improve. A 6-5 receiver, however, will always be a quarterback’s best friend.

While his potential is there as a freakish athlete, Pittman will want more. Receivers are required to be excellent blockers for the run game. Once the technique is mastered, his frame could be overwhelming.

It isn’t expected that he will start at this moment in time. There are a lot of unknowns at wide receiver that will be worked out by fall. There is no doubt that Landers will find playing time when healthy.

He’s just too athletic and capable to miss time on the outside. Not being projected as a slot guy just opens more doors. All the fan base can do is sit back and watch things unfold.