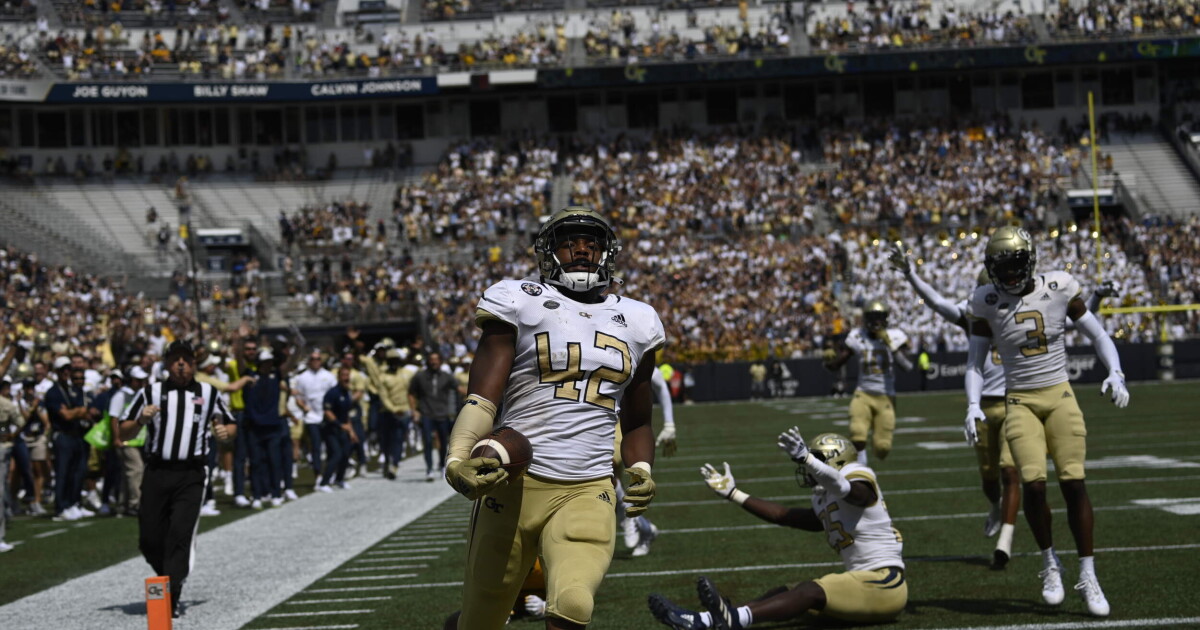 Going back to the end of the spring in 2021, Arkansas was thin on the defensive front. Many fans and media alike understandably began to worry about the talent and depth of the room.

Head coach Sam Pittman and Co. knew better than to panic. The Razorbacks eventually brought in three transfers up front. Each became a starter. Two of them, Tre Williams and John Ridgeway, worked their way to the NFL Combine in March.

Fast forward to the present day and each of those players are gone. While the roster has some talent at the position, it’s clear what the desire is. In need of another refresh of experience and size, the coaching staff dove back into the portal.

Hopping out of the portal, the second of two defensive line additions was Jordan Domineck. While listed as a graduate transfer, he has two years remaining. Hailing from Lakeland, Fla., he brought his talents to Atlanta to play for Georgia Tech.

Stepping on campus, he stood at 6-foot-3 and 245 pounds and has since trimmed his weight down 10 pounds. Domineck managed to find playing time every season from his freshman year onward. Some credit can be given to undergoing a coaching change during his tenure. The majority of the credit however, can be given to his talent and athleticism.

His freshman year didn’t produce much stats-wise, only recording five tackles. During his second year, he began to show what he could be. He racked up 25 tackles which was accompanied by 1.5 sacks.

His third and fourth years proved that he could take the next step. Over the two seasons, he combined for 73 total tackles — impressive for defensive linemen. Domineck also totaled 7.5 sacks, forced four fumbles, and knocked down a pair of passes. His statistical and physical transformation over those four years got the attention of other Power 5 coaches.

Entering the transfer portal, Domineck’s name became a hot commodity. When the dust settled, he chose Arkansas to continue his academic and football career. Outside of outstanding character, here’s what he brings to defensive coordinator Barry Odom’s front:

Relentless Motor on the Edge

The highlight that jumps off the page in regard to Domineck is his motor. The “high motor” description is probably tossed around more than it should. Those qualifications are never quitting on a play, being able to get off the ball fast, and finding the football.

For Domineck, it couldn’t be any more true for each. Getting a defensive end in the SEC with speed to the ball is necessary. Offensive tackles are not only getting bigger, but are getting quicker feet. For edge rushers in college football’s top conference, speed is a must.

For Arkansas last season, Tre Williams was able to put that idea in motion. While not incredibly imposing, Williams was not a player teams enjoyed lining up against. His two most impressive games came against Texas A&M and Mississippi State.

Neither team could combat his speed, including Mississippi State tackle and NFL Draft prospect Charles Cross. While Domineck doesn’t bring the same size as Williams, their motors are reflective of each other. When Domineck’s speed doesn’t win out (and it won’t always), he doesn’t stop at that.

One of his great characteristics is his relentlessness and the fact that he doesn’t quit on plays. This also reflects his polished play recognition. No matter where he ends up along the line during a play, he continues to pursue and seems to always end up near the ball carrier.

Thanks to his high motor, Domineck can be a terror for those with the ball. Lined up on the outside is when he does most of his damage. As an edge rusher, he recorded 6.5 of his 7.5 total sacks over the last two seasons. Two of those sacks were combined with forced fumbles.

On one occasion, he was able to tomahawk the ball out of North Carolina quarterback Sam Howell’s hands. It seemed as if he was out of the play until he caught up to Howell and made the strip. The other occasion came at an unfortunate time for Duke.

Domineck plowed his way into the backfield and crushed the quarterback in the end zone. As a result, the ball came loose right into the hands of Domineck for a touchdown. Conversely, only one sack was forced while he was used on the interior.

Aside from pass rushing, he has a nose for outside runs. Against Kennesaw State, Domineck provided proof that he could defend toss and option plays. Forcing two fumbles in the game, he put himself in a position to keep his body in the pitch lanes.

Even when teams attempted to get tricky with jet sweeps, he wouldn’t be fooled. His improved tackling from the 2020 season to 2021 played a huge role in his progression as a run stopper. In becoming a more consistent tackler, he caused more problems sticking to the edge.

With all he brings to the table, Domineck wouldn’t be nearly as dominant without his hand work and rapid-fire feet. To assist with his pure speed, Domineck also has great stop-and-go ability. The defensive equivalent to hesitation moves on offense, it can freeze a lineman in place. Doing so can open up a gap or lessen the edge for him to speed through.

He still has aspects of his game that need improvement. His biggest knock is that he doesn’t show a ton of bend. In short, this means he tends to be stiff when rushing the passer.

Domineck does have the ability to get low and keep his feet moving. That’s the bright side. Already having those skills will allow coaching to tend to his ability to bend. This is once again a reflection of Tre Williams, who struggled to stay low sometimes.

When his dependence shifts to his hand usage, it is still quite dependable. As with many defensive linemen, he goes to the swim move often. Using the swim move isn’t for nothing either as it is pretty rapid and effective.

His other go-to move is less of a true move. He has a knack for knocking away the outstretched hands of opposing linemen. If a lineman were to land a grip, he would have to deal with Domineck’s evermoving feet.

On film, that would allow him to tire the arm(s) of linemen out. Recording two pass deflections thus far in his career, he uses his hands in the passing lanes as well.

Looking at Domineck’s overall body of work, it doesn’t disappoint. Pairing his high-octane motor and love for hitting the guy on offense is part of his success. Factoring in his speed in multiple facets of the game is what made him sought after in the portal. Standing at 235 pounds, there is no doubt he will be asked to add weight to fit Odom’s system.

This is especially so as long as Odom runs a three-man front. With the defensive line desperate for someone to emerge, Domineck will be a name to watch. If he can replicate what Williams did for the Hogs last season, no one will be disappointed.