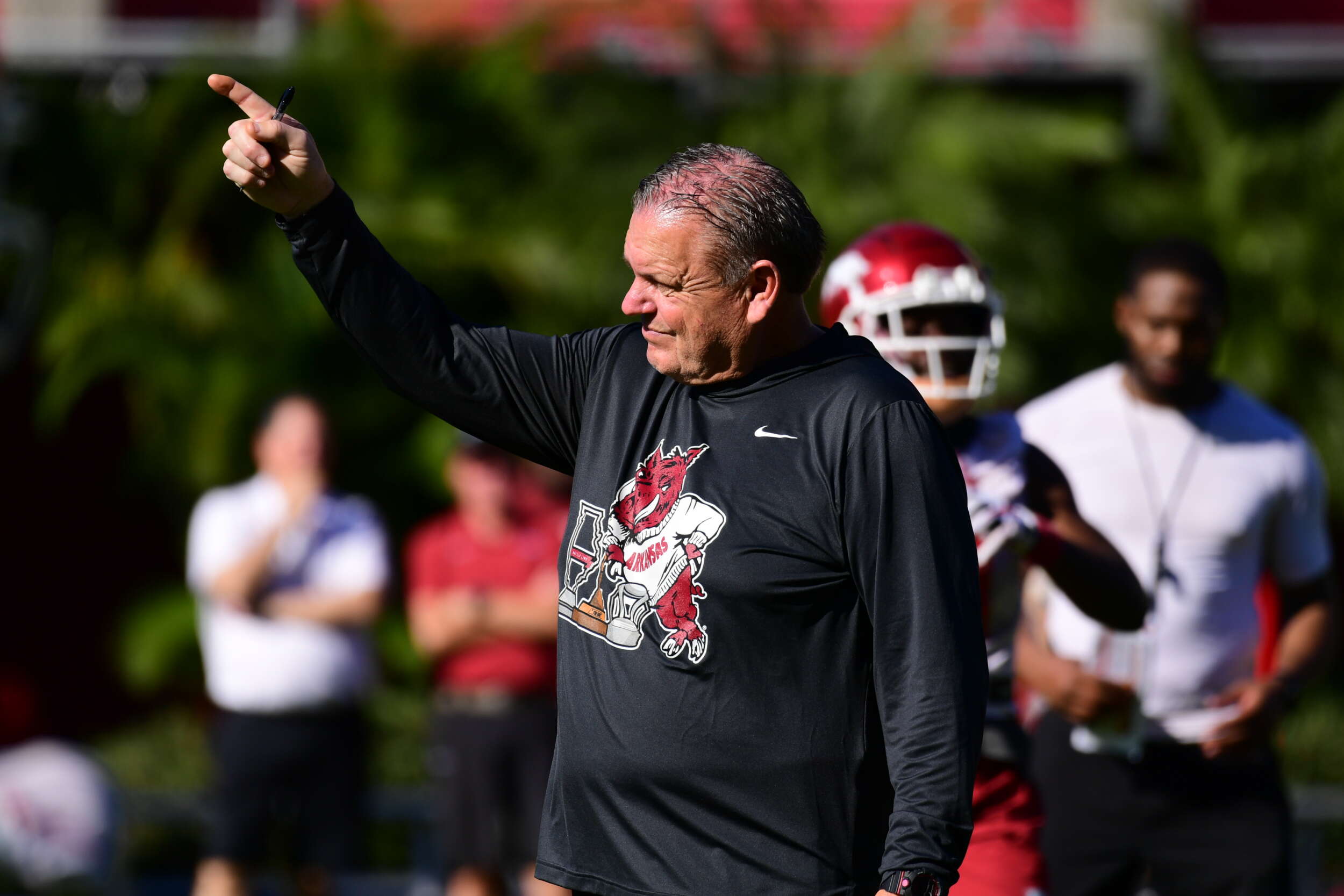 With the conclusion of National Signing Day behind us, Arkansas’ class ranking finalized at 28th in the country, according to the 247Sports Composite rankings and 18th via 247Sports.

A class that is full of irregularities, it includes seven total transfers and no quarterback via the high school ranks. One of the transfers coming in is former South Florida quarterback Cade Fortin.

Fortin however, is not coming in on scholarship. Not bringing in a scholarship quarterback is something that Arkansas hasn’t done in practically a decade. The great thing is that it isn’t the biggest out-of-the-ordinary note regarding the class.

For last year’s class, having 13 early enrollees was something Arkansas fans considered a great surprise. Having a big number to enroll in January was a victory. Maybe the expectations should be raised going forward. Currently, 16 high school commits have already enrolled and are set to hit the field for spring practice.

Four transfers have also enrolled already, bringing the total number of new faces to 20. That number was enough to set a record for the university. Being able to get a freshman to play spring ball has always had its dividends.

“You have a chance to play,” head coach Sam Pittman said. “Certainly the ones that are ready, we’ll get ready. The ones that aren’t, hopefully we can get them on some type of special teams and help us (through) there.”

If there was such thing as an early early-enrollee, then Arkansas commitments Kaden Henley and JJ Hollingsworth would hold that distinction. The pair of Arkansas natives were able to contribute to the team during preparations for the Outback Bowl against Penn State.

While transfers are not considered early enrollees, those brought in by Pittman and staff are expected to contribute right away. There doesn’t need to be any guesswork or overanalyzing as the transfer class rating is currently in the top 10, according to the 247Sports Composite rankings.

There were only four players from the high school ranks who decided to not enroll early. Three of those are wide receiver Isaiah Sategna, offensive lineman Patrick Kutas, and wide receiver Sam Mbake.

All three were composite four-stars and will carry high expectations when they do arrive on campus. With that said, here are some incoming freshmen expected to see early playing time:

The product of Maumelle, Chamblee gave his pledge to the Razorbacks somewhat early on. He hoped to help gain the commitment of his high school teammate, Nico Davillier. While Davillier did not enroll early, it did not stop Chamblee from arriving in January.

Listed at 6-foot-7 and 305 pounds, the four-star had plenty of offers. Notables include Miami, Florida, Auburn, Penn State, and Arkansas. After his stellar senior season, Chamblee was rewarded with the opportunity to play in the All-American Bowl in early January.

Arkansas will be returning four starters along the offensive line following Dalton Wagner’s decision to return for his final year of eligibility. The lone departure comes at the left tackle position which was held down by future NFL Draft pick Myron Cunningham. This sets up what will be one of the primary position battles this offseason.

Many believe that massive right tackle Ty’Kieast Crawford will be first in line to fill the gap. With an already college-level body, it would not be surprising to see Pittman plug Chamblee in at left or right tackle and see him go to work.

Throughout high school, he was a force to be reckoned with on the left side on a consistent basis. His footwork is one of his biggest strengths.

While throwing a true freshman in on day one in the SEC seems like a death wish, Pittman is known for working freshmen into the starting lineup as a season progresses. While it is a lot to live up to, Andrew Thomas — one of his offensive linemen during his tenure at Georgia — was a guy who saw plenty of playing time as a freshman.

Barring an impressive showing during the offseason, don’t expect Chamblee to start right away. There is a great chance however, that he will be the No. 2 at one of the tackle positions.

Based on reports, the Milan, Tenn. native is carrying high expectations to Fayetteville. Listed as a safety on most recruiting sites, Brown stands at 6-0 and 185 pounds. He has plenty of room to add good weight.

With one of the most impressive lists of Arkansas’ signees, Brown has notable offers from Alabama, Oregon, Miami, Auburn, and of course, Arkansas.

The defensive backs room has been a hot topic of discussion for Arkansas. Following the departures of Joe Foucha and Greg Brooks Jr., there were plenty of rumors circling the position group. None of them seemed to have a happy ending, either.

All of the negative publicity was halted when All-SEC safety Jalen Catalon announced that he was returning for his junior year. Most recently, Pittman made a fresh hire as he brought in former Marshall defensive backs coach Dominique Bowman.

A fresh coach at a position always leads to spots becoming wide open. Entering spring ball, it will be the perfect opportunity for Brown to prove his ability to a new coach.

After the recent addition of Georgia transfer Latavious Brini, the expected starters on the back end are Catalon, Myles Slusher, and Brini. That doesn’t mean Brown cannot battle for significant playing time early on as freshman Jayden Johnson did this past season.

Recruited to take Catalon’s role when he finally opts for the NFL Draft, Brown will get his shot to learn under the All-SEC performer. He will also battle to be his backup. As he learns the defense, expect Brown to be incorporated heavily into special teams as a freshman.

Needed now more than ever, Crook will be walking into an Arkansas linebackers room that will look nothing like it did this past season. Coming from the football powerhouse that is Duncanville, Tex., Crook had a very solid offer list that includes Michigan, USC, Oklahoma State, Baylor, and Arkansas.

The one-time Oklahoma State commit played arguably one of the biggest roles for Duncanville High School on the way to the state title. Listed at 6-0 and 225 pounds, Crook is a player who consistently plays bigger than his size. His frame is something that has been criticized throughout his recruitment.

The one returning starter in the linebacker room is a big one in Bumper Pool. Still, the holes that will be left by the likes Grant Morgan and Hayden Henry will be bigger. Before the transfer portal addition of Alabama linebacker and edge Drew Sanders, many in Fayetteville were hitting the panic button.

The lack of experience outside of Pool and Sanders will still be a concern, however. No other linebacker on the roster has a start to his name.

The departure of Andrew Parker plays a massive role in the lack of experience, also. With so many young players, the battle for backup linebacker should be one of, if not, the most intriguing position battles for the Razorbacks this offseason.

Crook is one of three linebackers that are being brought in from the high school ranks. The other two are all also early enrollees. One of the commits, Mani Powell was injured very early on in his senior season. He is still in the recovery process.

Powell will certainly have a role on the squad once he is back to 100%. This injury is what moves the spotlight from Powell to Crook. Some of the names already in the linebacker room that will be in the running for a backup role include Kelin Burrle, Marco Avant, and Pooh Paul.

Crook will be bringing his fantastic ability as a run stuffer and as a coverage linebacker to the field in Fayetteville as his hype increases. Be on the lookout for his name once spring practice rolls around.