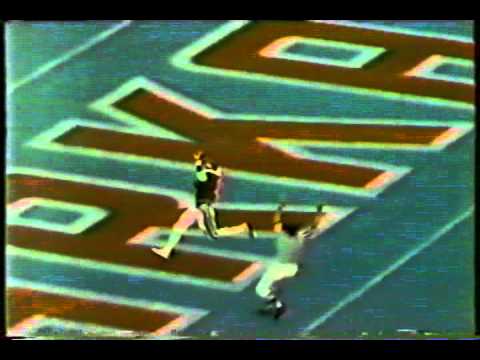 This season, Arkansas made an early-season statement with a win over a ranked Texas team. The Razorbacks started turning heads with an impressive 40-21 beatdown of Texas in Week 2.

That however, was nothing compared to the whooping they gave the Longhorns on this day 40 years. It was pure domination as Arkansas took down top-ranked Texas, 42-11.

Arkansas was 4-1 and unranked as it returned to its home stadium for the first time since its season opener on Oct. 17, 1981. It was the third straight game against a Texas school. After falling at TCU, the Razorbacks had topped Texas Tech the week prior.

Texas was a perfect 4-0 with wins over top-15 teams in Miami and Oklahoma. On that day in Fayetteville however, it would have been hard to guess which team was No. 1 and which was unranked.

It was domination from the start. The Arkansas offense rushed for 227 yards while the defense forced seven turnovers.

The Razorbacks even scored points on special team as an errant snap on a Texas punt went out the end zone to make it 8-0. Running back Gary Anderson rushed and caught a touchdown in the first half as Arkansas raced to a 25-3 lead at halftime.

In addition to throwing a touchdown pass to Anderson, quarterback Tom Jones also rushed for a touchdown for Arkansas in the opening half. In the third quarter, Jones and Darryl Bowles each rushed for touchdowns to give Arkansas a commanding 39-3 lead.

Bruce Lahay’s second field goal of the day capped the scoring for the Razorbacks early in the fourth. Texas didn’t find the end zone until the game’s final minute when Robert Brewer found Donnie Little for an 8-yard score. A 2-point conversion served as the final points of the day.

Kim Dameron and Jeff Goff each came away with interceptions for the Arkansas defense. Danny Walters had two in the victory. Goff also recovered a fumble.

Texas had the edge in total yardage, but that was largely due to Arkansas having short fields and the Longhorns being forced to pass with a large deficit. None of Arkansas’ five touchdown drives were longer than 44 yards.

With the win, Lou Holtz’s Arkansas team jumped into the polls for the first time at No. 12. The Razorbacks however, lost the following week to Houston. After ripping off three straight wins, Arkansas closed the year with consecutive losses to SMU and then North Carolina in the Gator Bowl to finish 8-4 and No. 16 in the final poll.

Texas went 6-0-1 the rest of the way with the lone blemish being a tie against Houston. The Longhorns closed the year with a 14-12 win over Alabama to finish second in the final AP Poll. The loss to Arkansas however, would cost Texas a Southwest Conference title as SMU claimed the crown.

That defeat came on this day four decades ago.