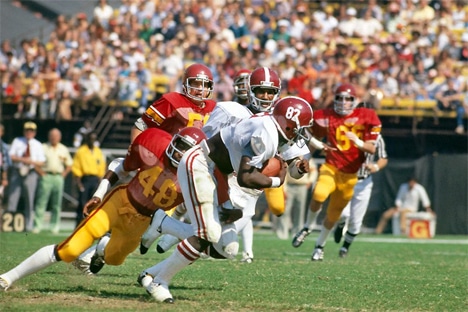 Alabama and USC have met eight times, but the last meeting that wasn’t on a neutral field came on this day 45 years ago.

In a top-10 showdown, the defenses dominated the first three quarters. In the end, a missed 2-point conversion was the difference as Alabama held off the top-ranked Trojans, 21-20.

At 4-0, USC was the new No. 1 in the AP Poll as it arrived at the Los Angeles Coliseum on Oct. 8, 1977. The Trojans, under second-year head coach John Robinson, had won their final 11 games to close the 1976 season and were riding a 15-game winning streak.

Alabama had overcome a loss at Nebraska to come in with a record of 3-1. The Crimson Tide were 3-0 in SEC play and looking to make a major statement.

A third-quarter run by Alabama’s Johnny Davis served as the only touchdown for either team through three quarters as the Crimson Tide entered the final period with a 7-6 lead. Early in the fourth quarter, however, it looked as though Alabama may cruise to victory.

A pair of touchdown runs by Tony Nathan pushed the lead to 21-6. As the nation’s top-ranked team and at home, USC refused to go quietly.

Less than seven minutes remained when the Trojans found the end zone for the first time. Rob Hertel’s 10-yard touchdown pass to Calvin Sweeney followed by a successful 2-point conversion cut the lead to 21-14.

With momentum finally favoring USC, Hertel marched the Trojans 79 yards for a score late in the quarter. Lynn Cain’s 1-yard touchdown with 39 seconds left cut the lead to one and left Robinson with a decision to make.

His offense stayed on the field.

After leading two fourth-quarter touchdown drives, however, Hertel had run out of magic. Barry Krauss intercepted his desperation heave to seal the win for Alabama.

The home defeat to Alabama would begin a stretch of four losses in six games for the Trojans. USC closed the year with wins over UCLA and then Texas A&M in the Bluebonnet Bowl to finish 8-4 and No. 13 in the final AP Poll.

As for Alabama, it would not lose again. The Crimson Tide won each of their final seven games — all by at least 14 points — to close on a 10-game winning streak. At 11-1, Alabama finished No. 2 in the polls behind Notre Dame.

The following year, USC would return the favor by beating No. 1 Alabama in Birmingham. Since then, the teams have met just twice. The closest matchup in series history came down to a 2-point conversion and on this day 45 years ago.

Featured image courtesy of Inside SoCal