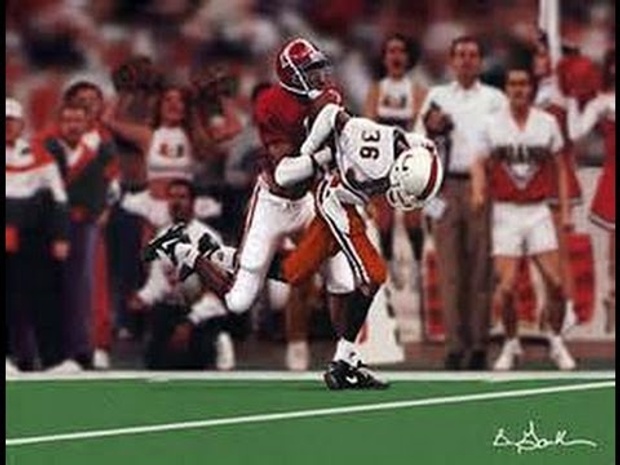 In one of the most-highly anticipated games of Week 1 of the college football season, reigning national champion Alabama will take on Miami in Atlanta.

The Crimson Tide are coming off of their sixth national champion under Nick Saban. Miami made major strides last season under now third-year coach Manny Diaz. The Hurricanes finished 8-3 and No. 22 in the AP Poll.

The contest at Mercedes-Benz Stadium will be the first meeting between the schools since the 1993 Sugar Bowl for the national championship. Played on Jan. 1, 1993, the contest pitted top-ranked Miami against No. 2 Alabama.

Despite being an 8-point underdog, Alabama ended Miami’s 29-game winning streak in dominant fashion with a 34-13 victory. Derrick Lassic scored two touchdowns for Alabama and led a rushing attack that went for 267 yards.

George Teague also returned an interception for a touchdown after making a memorable strip of Miami’s Lamar Thomas earlier in the game on a play that appeared to be a sure touchdown. The Alabama defense intercepted Miami quarterback and Heisman Trophy winner Gino Torretta three times. Kevin Williams returned a punt for the lone Miami touchdown.

Much has changed in the nearly three decades since the teams last met. Here’s a look back at what each program has accomplished since:

Alabama: 6 (2009, 2011-12, 2015, 2017, 2020)
Miami: 1 (2001)
Overview: Alabama has become the team of the last 15 years under Saban. The Crimson Tide have won six national championships in 12 years and played for two others. The Hurricanes dominated in 2001, winning their first national championship in a decade. Miami’s repeat bid came up short the following year against Ohio State in a controversial Fiesta Bowl that ended in double overtime.

Alabama: 3 (Mark Ingram in 2009, Derrick Henry in 2015, DeVonta Smith in 2020)
Miami: 0
Overview: Miami has not had a Heisman Trophy winner since Torretta, who played his last game against Alabama. Prior to 2009, Alabama didn’t have a single Heisman Trophy winner. Since then, it has had three in Mark Ingram, Derrick Henry and DeVonta Smith. Since 2006, those three are the only non-quarterbacks to win the award.