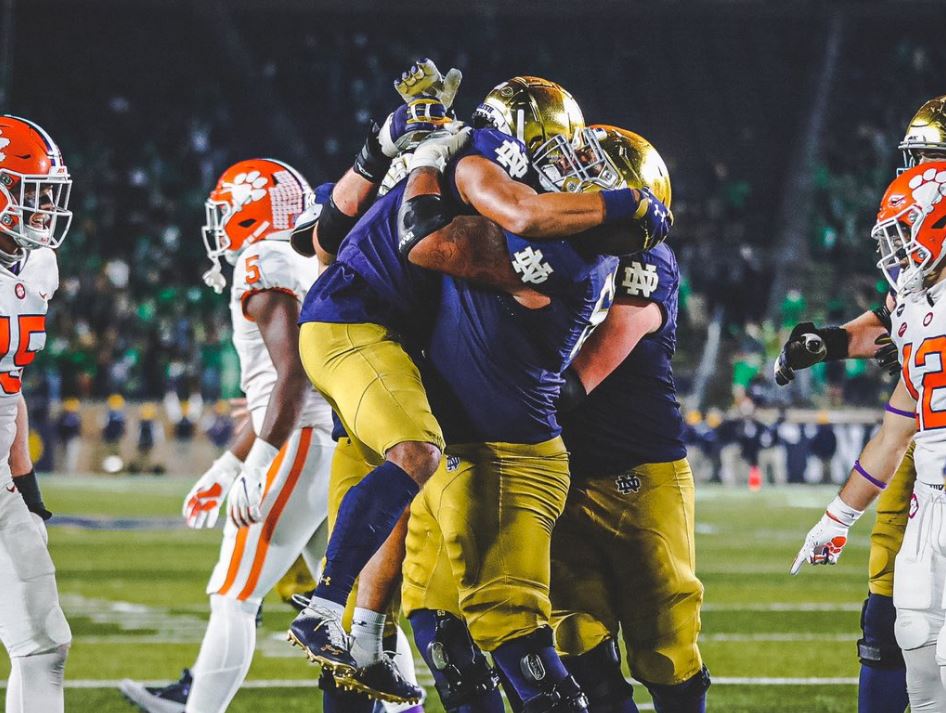 Two college football cathedrals will meet in a cathedral-type of game.

“The granddaddy of them all.”

Except, instead of meeting in the historic Rose Bowl in Pasadena, Cal., the game will instead be played in AT&T Stadium in Arlington, Tex. Local COVID-19 restrictions in the Southern California area would prohibit fans from attending the contest, prompting it to be moved.

The top-ranked Alabama Crimson Tide are in quite the familiar position — an undefeated No. 1 seed in the College Football Playoff coming off an SEC Championship.

Notre Dame, on the other hand, finds itself in the playoff for the second time in three years, and looks to avoid yet another embarrassment on the national stage. The Fighting Irish lost in the 2018 semifinals to Clemson, 30-3. Every time the Irish play in a game with a major trophy on the line, they fold up.

Will they avoid that same fate this year? We shall see.

The stage is now set. The committee has now spoken. No. 4 Notre Dame and No. 1 Alabama will now prepare to kick off the College Football Playoff at 4 p.m. ET on ESPN from the Lone Star State.

The Tide have quite some interesting statistics associated with this one. Alabama comes into Jerry’s World with a 4-0 all-time record at AT&T Stadium, and has done nothing but dominate in Arlington.

Nick Saban’s squad opened the 2012 season with a 41-14 win over Michigan, took care of Wisconsin in 2015, 35-17 and manhandled Michigan State that same season, 38-0 in the Cotton Bowl as part of the College Football Playoff. Alabama opened up that following season with a 52-6 rout of USC.

Speaking of that 2012 season, you know how that one finished up? Alabama won the national championship, by routing who you ask? The Notre Dame Fighting Irish, 42-14 in Miami.

The Crimson Tide are going to be hungry on Friday afternoon. They return to the playoff in 2020 after missing it last year for the first time during the playoff era.

Notre Dame has some different story lines. The Irish may have dropped that 2012 National Championship, but they do hold the lead in the all-time series at 5-2. They haven’t had as much success in Arlington, however, at least recently. That 30-3 loss to Clemson was in this same building, so head coach Brian Kelly and company will certainly want to change that narrative.

The Alabama Crimson Tide have dominated their way through the 2020 season, catapulted by three stars that each have legit cases for winning the Heisman Trophy. We’ll get to those names in a minute, but first, let’s run back Alabama’s 2020 schedule.

The Tide have pretty much thumped everyone they’ve faced. Alabama opened up the season with big wins over Missouri and an impressive Texas A&M team before surviving a scare against Lane Kiffin’s Ole Miss Rebels.

The response? Taking down Georgia in a top-3 match-up before cruising its way through the rest of the regular season at 10-0, without playing a game closer than 31 points. Yeah, the Crimson Tide were that dominant. Then came the SEC Championship, where ´Bama fended off a pesky Florida team trying to make its case for the College Football Playoff, by a final score of 52-46.

The trio of Mac Jones, DeVonta Smith, and Najee Harris are all to thank for the Tide’s success offensively. The first of those two will be on Zoom for the Heisman Trophy Ceremony, and deservedly so. Jones threw for over 3,700 yards this season — good for second in the FBS — while connecting on 32 touchdowns which is good for third in the country.

Smith hauled in a lot of those, catching 17 touchdowns and tallying 1,511 yards receiving. Harris went for just under 1,300 yards and 24 touchdowns in 2020. ´Bama’s offensive line is a major strength as well, but they’ll miss Landon Dickerson big time in this one. Dickerson suffered a season-ending injury against Florida in the SEC title game.

Alabama averaged nearly 50 points per game this past season, leading to the majority of its success in 2020. It has got some studs on defense too.

That starts with Dylan Moses, who leads the team in tackles. He’s paired with Christian Harris, who is known for swarming opposing players at the linebacker position. Jordan Battle and Malachi Moore are guys to watch out for in that secondary, as well as many others for the Tide who have made plenty of impact this past season.

So how about the Notre Dame Fighting Irish? They were undefeated in the regular season too. They’re tired of hearing about Alabama.

Kelly’s squad enters the College Football Playoff as the first team to ever lose in its conference championship game and still make the playoff. The Irish didn’t just lose it either, they got mauled by the Clemson Tigers, 34-10. We still can’t ignore their fantastic season just because of that one game. They´re here for a reason.

The Irish did have a little bit of a shaky start though — playing close games with Duke, Florida State, and Louisville, but whipping South Florida and eventually Pittsburgh after those close calls. After a slugfest win at Georgia Tech, here came the big one.

Round 1 of Clemson and Notre Dame was a fun one. The Irish pulled it out in a thriller in double-overtime, 47-40. Against a team missing Trevor Lawrence and multiple defensive starters, Notre Dame found a way.

For the rest of the regular season, Notre Dame looked impressive. It beat up on Boston College before controlling the game against a fantastic North Carolina team, and closing it out with a big win against Syracuse. Then, the championship game dud happened. The Irish will now look to prove to the country that was a fluke and that they can beat any team in the nation, including Alabama.

To do so, they’ll need a big game from star quarterback Ian Book, and running back Kyren Williams. Book has only thrown two interceptions this season, and if the Irish have a chance, he’ll have to limit those as much as possible.

Defensively, Clark Lea’s group has been stout the majority of the season. But this is a new challenge. He’ll need big games from safety Kyle Hamilton and linebacker Jeremiah Owusu-Koramoah to slow down the ´Bama triple threat. Force a few turnovers, and Notre Dame may have a shot.

Notre Dame is a solid team; don’t get us wrong. But to be fair, it still isn’t close to the same level as Alabama.

It’s just so hard to go against Saban and the Crimson Tide. ´Bama holds the advantage in every phase of this game, and they´ll make that known.

Jones, Smith, and Harris will steamroll this Notre Dame defense. The Tide will shut down Book to dominate this semifinal match-up and cruise to another national title game under Coach Saban.