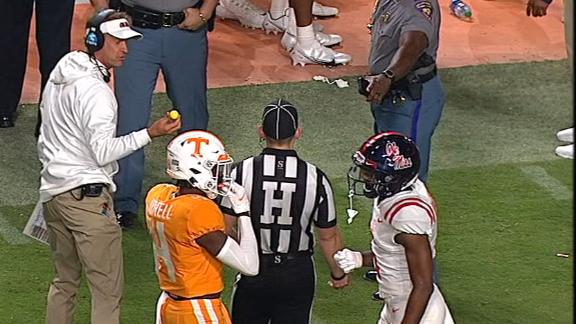 If you were one of the thousands of respectful and normal fans in attendance for Saturday night’s contest between Ole Miss and Tennessee in Knoxville, congratulations.

You witnessed a once-in-a-lifetime type atmosphere and an amazing football game that came down to the wire. Thanks to those fans, we are able to have such top-notch atmospheres.

If you were one of the disrespectful and flat-out dangerous fans that put people at risk over a football game, you should be ashamed.

Those fans ruined nights. Children attending a game with their parents were terrified in the stands. Cheerleaders and bands had to evacuate the field, and players and coaches had to play with a literal target on their back.

For three and a half quarters, we had a mostly normal football game between the Rebels and Volunteers. The teams went back and forth all night before Ole Miss ultimately prevailed, 31-26.

Of course, there is history and emotion here. When Ole Miss head coach Lane Kiffin left Tennessee for USC in 2009, it left a sour taste in the mouths of Tennessee fans.

Finally, they got to let their emotions out when Lane made his first appearance on Rocky Top as an opposing head coach. For most of the game, that emotion was channeled verbally.

Vulgar chants came from the crowd all throughout the game, and the Tennessee faithful cheered loud and proud. Those loud cheers from the crowd are what we need more of. It is what makes SEC football in particular great.

In the final minute, Tennessee ran a play to try and convert a long fourth down. The play came just short of the first down marker. The officiating crew confirmed the call. Admittedly, the call was rather close.

The sequence of events that followed was downright embarrassing. Despite still having three timeouts left in a very winnable game, Tennessee fans lofted items onto the field. Whether it was a golf ball hitting Kiffin or mustard bottles, items were heaved in the direction of players and coaches.

Ole Miss players were evacuated from the sidelines. So were the band and cheerleaders.

Officials from both schools met in the middle of the field to discuss what to do next. Call the game? Postpone it? Let it play out? We do not know what conversations were taking place, but we know there were conversations.

After a 25-minute delay, both teams met on the field to finish the game.

Tennessee made a defensive stop, giving it a chance to win, down just five. Tennessee quarterback Hendon Hooker went down, so in came Joe Milton. The Volunteers drove down the field, but came up short.

The classless acts of a select few Tennessee faithful carried into the postgame. A water bottle was hurled at Kiffin as he exited the field. Thankfully, Kiffin snagged it out of midair. To counter, Kiffin tossed his visor into the stands for one final message to the Tennessee faithful.

There comes a time when passion and violence cross paths. This is one of those. Certainly, more than 95% of the fans at Neyland Stadium were kind and respectful. Unfortunately, that 5% ruined it for everyone else.

At the end of the day, it is a football game. In the SEC, it just means more, but that does not mean that people should be in danger.

Regardless of what happened on Saturday, people are still going to get up and go to church on Sunday and work on Monday. Football is football. Lives will go on regardless of a final score.

Some Ole Miss players were children less than a year ago and are just trying to figure out their paths in life. 18- and 19-year-olds do not deserve to be attacked, especially when they did nothing wrong.

We do not know what the punishment will be for Tennessee, or if there will be one. The fact of the matter is that there should be a punishment — a big one at that.

It is unfortunately impossible to find everyone who threw something during the game, but they should never be allowed at Neyland Stadium again. Whether alcohol sales are banned or the SEC takes action, they should get the maximum punishment.

Tennessee and Ole Miss played an unbelievable game. Both teams left it all on the line, and one team came short. That is how life works, and football is no exception.

Unfortunately, the spotlight will not be on the game nor the players that prepared or played so hard. Instead, the focus will be on the cowardly fans who decided to launch projectiles at innocent people.

To that 5% alluded to earlier, congratulations. You will forever be remembered as a people who are too immature and dangerous to attend a football game.

Your mark on Tennessee football will not be one of pride. It will one of shear embarrassment.

Now is the time to take a look in the mirror and fix it before it happens again.