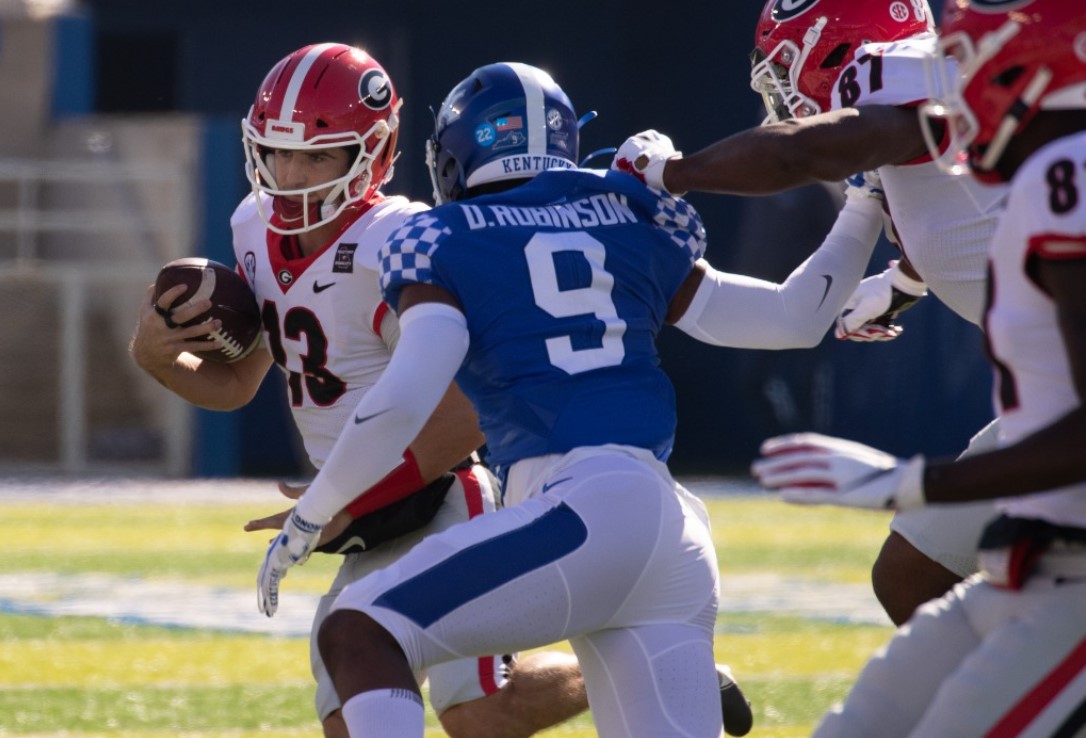 In 2017, Georgia and Kentucky squared off in a contest that ultimately decided the SEC East. Four years later, they will do it again.

The top-ranked Bulldogs have been rolling, but so have the No. 11 Wildcats. Both will arrive at Sanford Stadium on Saturday with perfect 6-0 records. It will mark the first time that SEC East opponents have met with perfect records this late in the season.

Something has to give.

The teams will meet on Saturday in Athens at 3:30 p.m. ET. The contest will air on CBS.

This has been a series dominated by the Dawgs, as one would expect. Georgia holds a 60-12 series lead over the Wildcats, and has won 11 straight dating back to 2010. That last win for Kentucky came in 2009, when the Wildcats prevailed, 34-27.

Head coach Mark Stoops has made the Kentucky football program more competitive than it has been since Bear Bryant was roaming the sidelines, but the Bulldogs have looked untouchable at the midway point in the season.

Stoops came close to beating Georgia in 2016 with a 27-24 loss, but is still winless against Georgia in his eight prior years at Kentucky. In fact, every other game during his tenure has been decided by at least two possessions.

A 34-10 win over Auburn and an Alabama loss gave Georgia the unanimous No. 1 spot in the polls this week, where most believed it belonged.

Still, there is more work to be done. This week, the Bulldogs could essentially put the SEC East away with a win over their biggest competitor in the division.

The Georgia defense has been allowing just 5.5 points per game. The offense has been rolling, even with injuries to guys like JT Daniels, Jermaine Burton, and George Pickens.

Each week, Georgia has been playing with something to prove. With a win this week, it would be hard to imagine Georgia not making the trip to Atlanta for the SEC Championship.

Many are overlooking the fact that Kentucky is one of the two unbeaten teams in the SEC. At this point in the Stoops era, the Wildcats look as strong as ever before.

They overcame near-upset losses to Chattanooga and South Carolina by upsetting Florida and blowing out LSU. Just like that, Kentucky is back on the right track.

Running back Chris Rodriguez Jr. leads the league in rushing, but quarterback Will Levis has been the x-factor for the Wildcats. Levis has been able to give Kentucky something it has not seen in a while — the ability to push the ball vertically.

Kentucky will have its work cut out, but what coordinator Liam Coen has done with this offense is impressive, regardless of the result this Saturday.

For Georgia, it’s hard to legitimately find an area where it needs to improve.

Kentucky can attack a defense in many ways, but let’s face it: the Georgia defense is unlike anything that the Wildcats have or will see this season. Now, it is up to the Georgia offense to execute and put the ball in the end zone.

Players like Stetson Bennett and Ladd McConkey have stepped up in a big way for the Dawgs in the absence of guys like Daniels and Pickens. As the Bulldogs get healthier each week, their offense should only get stronger.

As long as Georgia does not shoot itself in the foot, it should be able to come out with another big win.

This is the most complete team that Stoops has fielded up to this point of his tenure, but he unfortunately will run into the buzz-saw that is No. 1 Georgia.

Georgia is playing its best football at this point of the season, but so are the Wildcats.

If Kentucky is going to win this game, it is going to need some momentum-changing moments. Whether it is a blocked punt or a trick play touchdown, the Wildcats are going to need a lot of those plays to create momentum and get the crowd out of the game.

If they can not do those things, winning will be more of a daunting task than it already is.

Right now, Georgia is a well-oiled machine. The Bulldogs have already faced good competition in Arkansas and Auburn and were unfazed.

Kentucky does have versatility on offense, so maybe it can keep the Georgia defense honest enough to make some plays. Unfortunately for the Wildcats, it’s hard to see them making enough over the course of 60 minutes.

The Dawgs have run through everyone they have played. Kentucky will likely be next.

Stoops has things rolling in Lexington, but Georgia will send the Kentucky program crashing back down to earth.