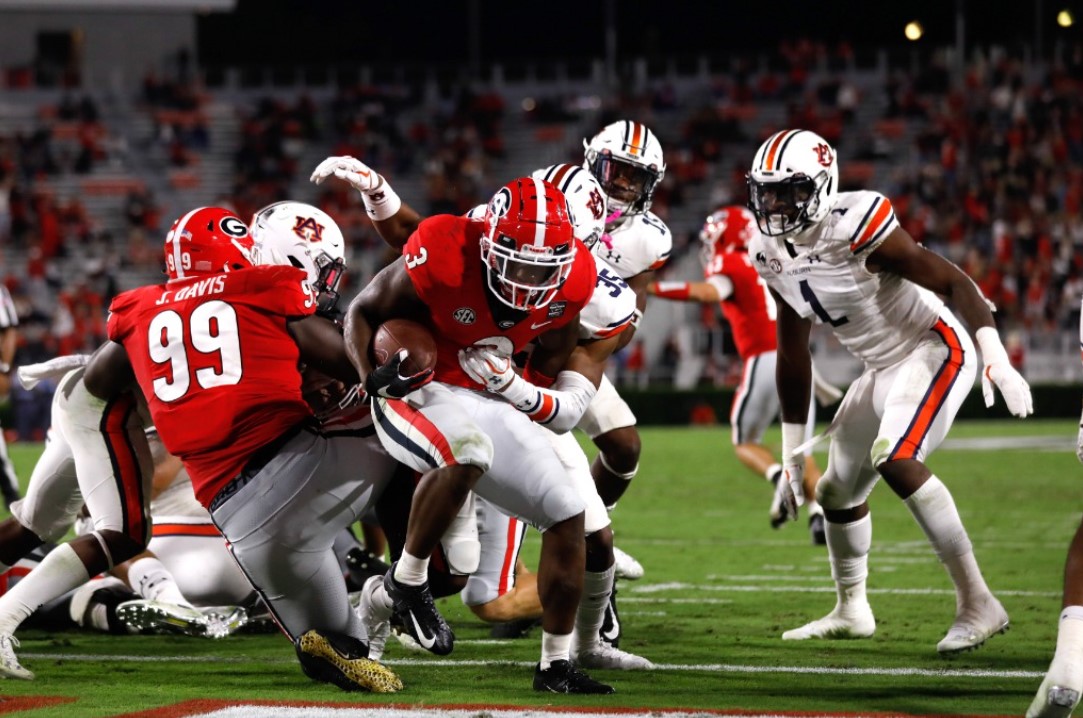 On Saturday, the elite Georgia defense will travel to Jordan-Hare Stadium to take on the scrappy Auburn Tigers as they renew the “Deep South’s Oldest Rivalry”.

Kickoff is set for 3:30 p.m. ET for these old rivals. The contest airs on CBS.

Auburn and Georgia have been playing one another for longer than almost anyone else in college football. The series dates back to 1892 and is the longest-lasting rivalry in the south.

Not only is it a deep-rooted rivalry, but it is also a highly-competitive one too.

Georgia has dominated the series as of late, winning nine of the last 12 meetings. Still, the Dawgs only lead the all-time series, 61-56-8.

Auburn has however, won two of the last three meetings at home. That is something to watch out for as the teams meet for the 126th time on Saturday.

In just five games at Auburn, head coach Bryan Harsin accomplished something Gus Malzahn never did — he won a road game against a rival.

For the first time since 1999, Auburn knocked off LSU last week in Death Valley. It has given the Tigers some serious momentum and confidence headed into this week.

Georgia will be Auburn’s biggest test to this point of the season, and might be the biggest for the whole year. Whether or not Auburn can keep up with the Dawgs will be a big question mark, but the atmosphere will present huge test for Georgia.

Expect Auburn to lean heavily on its backs — both on the ground and through the air.

Georgia has been practically unchallenged since a 10-3 win over Clemson in the opener and is coming off a 37-0 beatdown of a top-10 team.

The Bulldogs will have a chance to validate some of the hype. Many see Georgia as the No. 1 team in the country.

It has two big wins over Clemson and Arkansas, and a win over a top-25 rival in a hostile environment would only bolster an already-impressive resume.

The health of quarterback JT Daniels is a big question mark headed into this week. The Bulldogs have had to rely on Stetson Bennett for two games this season, and it has proved effective so far. Still, will he be able to replicate that same success in a hostile environment?

We likely will not know who gets the start for Georgia at quarterback until Saturday.

Auburn is at a competitive disadvantage, and there is not much debate about that. Still, Auburn’s confidence has to be soaring after last week’s win and having this one at Jordan-Hare will be an advantage.

Look for Auburn to use some misdirection to try and get Georgia off-balanced, defensively. If the Tigers can’t, establishing a running game will be almost impossible.

Also, quarterback Bo Nix will need to bring over some more magic from the LSU victory. Finding a way to extend plays with his legs and hit on any big-play opportunity will be vital for the Tigers to pull the upset.

On defense, Auburn’s top priority will be stopping the run. If Bennett is the Georgia quarterback, the Dawgs are less likely to try to push the ball down the field. If Daniels is ready to go, the passing game will be more of a focus.

The Bulldogs have rolled through almost everyone they played, but a road game against a rival presents a new challenge.

The heath of Daniels will be crucial. Bennett has performed admirably in his place, but having Daniels will open up a lot more for offensive coordinator Todd Monken.

If Georgia can establish the run, it should be another convincing victory. Against Arkansas, the offensive line bullied the Razorbacks’ defensive front. Replicate that success against Auburn and everything else will fall into place.

Defensively, Georgia will aim to stop the run, which has not been an issue to this point in the season. However, the Bulldogs have not seen a group of running backs as good as Tank Bigsby and the Tigers’. If Nix is forced to make plays for Auburn, Georgia should easily remain unbeaten.

Again, Auburn is at a competitive disadvantage. That however, was also the case in 2017 — the last time Auburn knocked off the Bulldogs.

In a rivalry game in a hostile environment however, anything can happen.

Auburn will enter Saturday’s contest with a lot of confidence. Nix had one of the best games of his career and this is Auburn’s first big home game since the start of the COVID-19 pandemic, so expect Jordan-Hare to be rocking.

Unfortunately for the Tigers, it is hard to find any matchup they can win consistently over the course of 60 minutes. Georgia is an elite team and perhaps the best in the country.

Auburn will have the lead after a quarter. From there on, the talent advantage will take over.