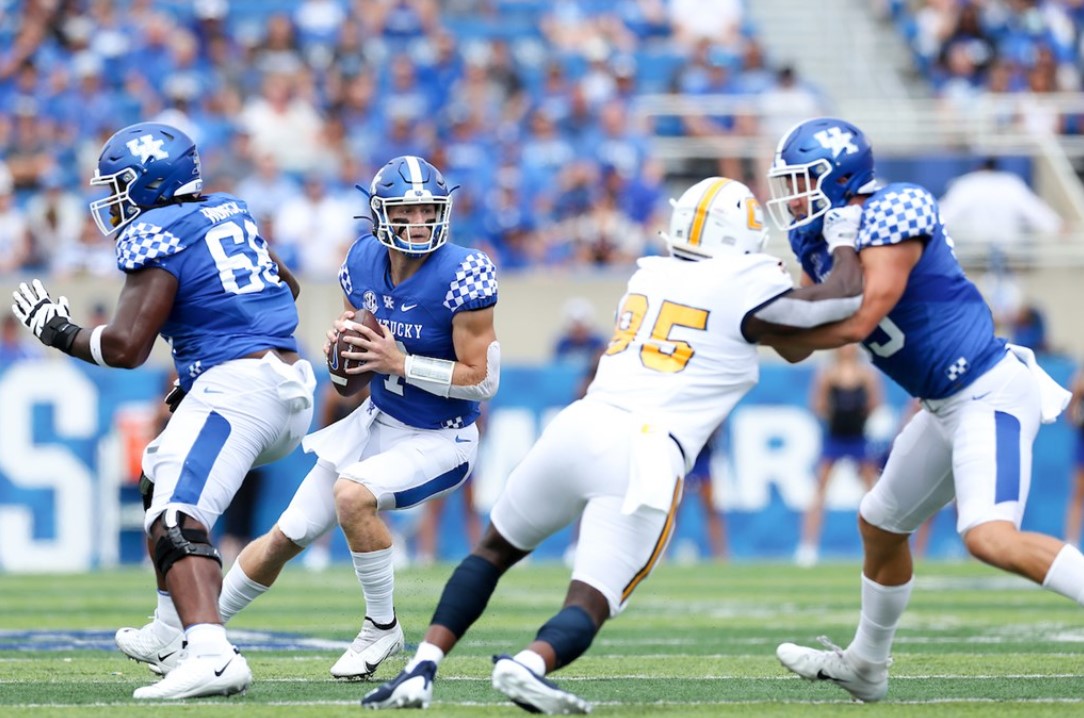 As we head into the third installment of this year-long series, we once again take a look at the top performers in the SEC and hand out our helmet stickers.

In what is a 2-part weekly series, we begin with the SEC East.

After two underwhelming performances, Emory Jones finally stepped up for the Gators.

Despite some more miscues through the air, Jones got things done on the ground with 77 rushing yards and a touchdown.

More importantly, he led a 99-yard touchdown drive in the second half to make things interesting. Unfortunately for Florida, it came up short against No. 1 Alabama, 31-29.

The former Georgia Bulldog was all over the field this past weekend for the Gators.

Cox finished with four tackles and a sack. He made his mark in other ways as well, tallying a pass breakup and a quarterback hurry.

After missing last week to injury, the Georgia signal-caller was electric in a 40-13 win over South Carolina.

Daniels completed 23 of his 31 passes for 303 yards and three touchdowns with one interception. At the half, Daniels was on pace for 500 passing yards.

Should Daniels stay healthy and consistent, the Bulldogs are going to be a force in the SEC race.

Georgia fans expected Nolan Smith to break onto the scene this year, and he had a big night against South Carolina.

The former No. 1 overall recruit finished with eight tackles and 1.5 for loss.

Smith continues to make his mark for a defensive front that may be the best in the country.

It is hard to find many positives about Kentucky’s near upset loss to Chattanooga, but Will Levis would be the biggest.

Despite throwing two picks, a 77-yard touchdown pass to Izayah Cummings early in the fourth quarter gave the Wildcats the lead for good.

After coming away with five tackles last week, Valentine set his career-high in tackles against Chattanooga with 11.

Valentine is sitting at 17 tackles for the year and has been one of Kentucky’s most reliable defenders.

Once again, Bazelak proved to be one of the best signal-callers in the league with his performance on Saturday.

Bazelak completed 21 of 30 passes for 346 yards and three scores in a 59-28 win over Southeast Missouri.

There were a lot of expectations surrounding Bazelak headed into the season. He has validated that hype so far.

Missouri was able to rotate a lot of guys on defense, but Jalani Williams led the way for the Tigers with five tackles.

South Carolina needs someone to step up out wide and Vann did that against a stout Georgia defense.

Vann finished with three receptions for 128 yards and a touchdown. He was going up and over defenders to showcase his physicality.

South Carolina finished with 214 passing yards, and more than half of those were courtesy of Vann.

Foster finished with one of the best single-game performances of the week across the league.

The fourth-year defensive back not only finished with seven tackles, but he came away with two interceptions.

If Foster can put up those numbers against Georgia, he can do that against anyone.

After leading a near comeback victory over Pittsburgh in Week 2, Tennessee head coach Josh Heupel gave Hooker the keys to the offense in Week 3.

He did not disappoint in a 56-0 victory.

The former Virginia Tech signal caller finished 17-for-25 passing with 199 yards and three touchdowns. On top of that, he led the way rushing for the Volunteers with 64 yards and a score.

It was against Tennessee Tech, but Hooker still rose to the occasion and gave the fan base in Knoxville reason for optimism.

McCullough is one of the better players overall for the Volunteers, and he proved that on Saturday.

Along with two tackles, Taylor excelled in coverage by coming away with a pick and two pass breakups.

Griffin is probably a name you haven’t heard of before, but he had a big night in a 41-23 loss to Stanford.

The Georgia native rushed for 107 yards on 19 carries.

Expect Griffin’s role to grow in the coming weeks.

The California native got a chance to take on a home-state team this past weekend. and did not let the opportunity pass him up.

Owusu finished with three tackles and a half-sack.