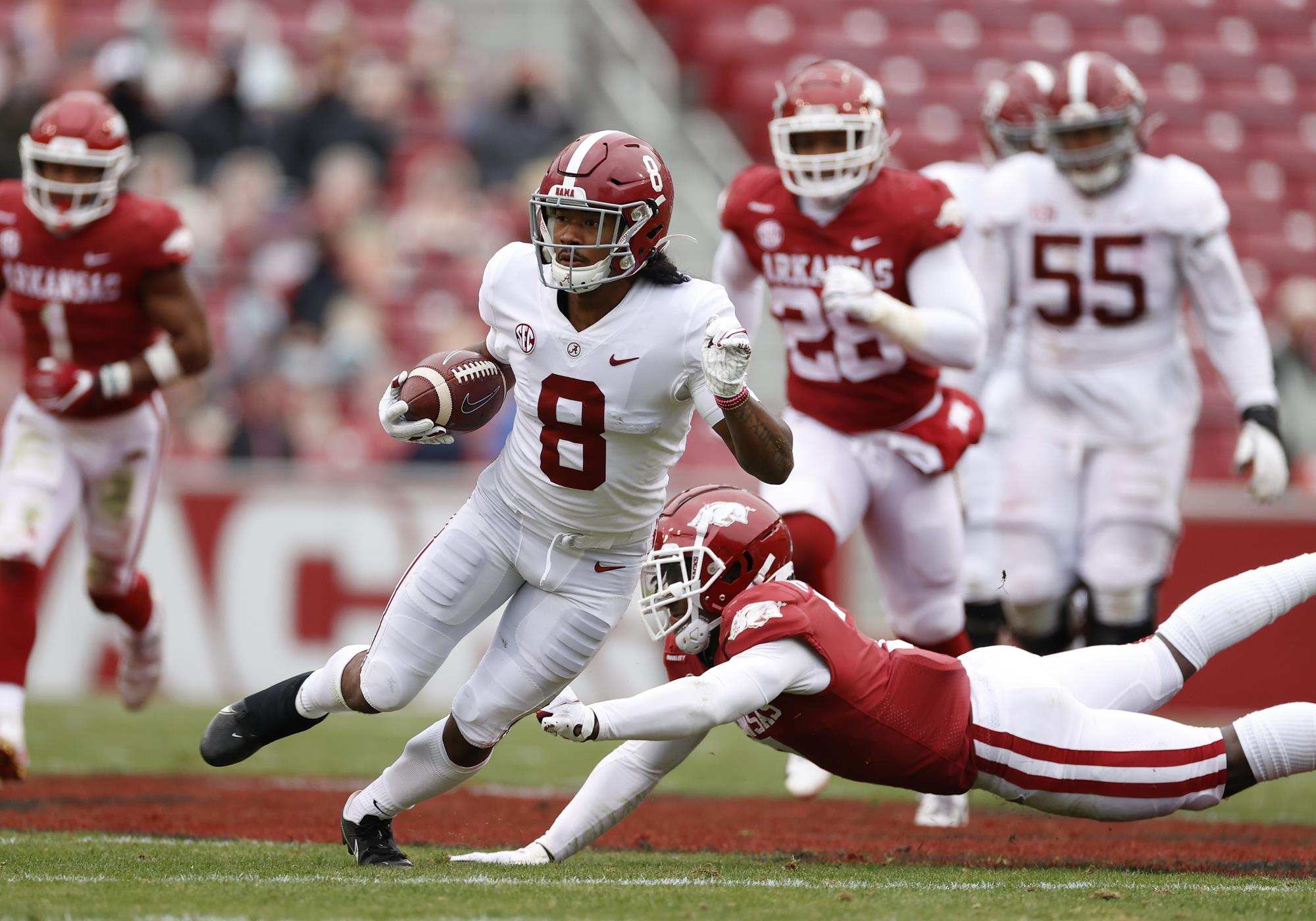 The SEC West is widely considered as the most competitive division in college football.

In 2021, there is a pretty good chance the talented division will back that statement up. In 2020, Alabama ran through this division en route to a national championship. The Crimson Tide became the first team in SEC history to win 10 SEC games in a single season.

After some turnover with the Tide, other teams will look to take a shot at the defending national champs. For those teams, it will be hard, but it might be the best chance they have for a while. Here is how we predict the SEC West to finish:

Will Alabama be as strong as last year’s team? No, not even close. Gone are some historic players offensively, including Heisman Trophy winning wide receiver Devonta Smith. Quarterback Mac Jones, running back Najee Harris, and wide receiver Jaylen Waddle highlight the major losses for the Tide. There are also some losses on the offensive front. Still, this team is flooded with talent.

At quarterback, the Bryce Young era begins. Young was the backup in 2020, and only threw 21 passes all season. Still, he was the highest-rated quarterback signee in Alabama history, which is saying something. He has a skill-set similar to former Alabama quarterback Tua Tagovailoa.

Tagovailoa is now the starting quarterback for the NFL’s Miami Dolphins. Young won’t have the weapons at his disposal that Jones did last year, but there is no shortage of talent. Guys like Agiye Hall and Jameson Williams are young, but have the ability to be elite receivers. Chances are that at least one of them will step up and become elite. It is worth noting that John Metchie is back after quietly racking up over 800 receiving yards last season.

Defensively, Alabama will be one of the strongest in the nation. The defensive line is elite, and Will Anderson has a chance to be one of the best players in the nation coming off the edge. The Crimson Tide have plenty of returning talent at linebacker, but added Tennessee transfer Henry T’oto’o to really take this group into the next level. The defensive backfield will miss Patrick Surtain, but there are numerous guys ready to break out here.

Alabama has been absolutely dominant under head coach Nick Saban, but it hasn’t gone undefeated in SEC play for two consecutive seasons. Still, let’s not kid ourselves. This team is still one of the best in the nation, and should prove to be national title contenders once again. 11 wins is probably the floor for Alabama in 2021.

Texas A&M finally got over the hump in 2020, where it finished 10-1. The lone loss was to eventual national champion Alabama, which kept the Aggies out of the College Football Playoff.

This team took huge strides forward in 2020, and will look to do that again. Here’s the catch: they’ll have to do it without a 4-year starter at quarterback in Kellen Mond and only one returning starter on the offensive line. Fortunately, this new quarterback will have a stable of options to work with at both running back and wide receiver. Isaiah Spiller has a case to be one of the best ball carriers in the country, and guys like Ainias Smith and Devon Achane are both super dangerous wherever they line up.

Who will that signal caller be? It will come down to Haynes King and Zach Calzada. Both were highly-recruited out of high school, but we have yet to see much of them at the college level. Nobody knows what to expect, but they have to perform well if this program wants to duplicate or build on last season’s success.

Defensively, A&M has one of the best defensive fronts in the SEC. It starts with DeMarvin Leal, who was elite last season. It will have to replace leading tackler Buddy Johnson, an absolute beast for years at linebacker for the Aggies.

Like Alabama, this team won’t be what they were in 2020. Still, they have a ton of momentum as a program. If they can find some stability at quarterback and the offensive front, another double-digit win season is on the horizon. Look for the Aggies to finish in the 9- to 10-win range in 2021.

LSU was arguably the most disappointing team in college football last year, where it finished 5-5 just one year removed from a national championship season. That, plus some off-field issues, have turned the heat up on head coach Ed Orgeron. Another season like last year, and things will get interesting.

Instead of sitting around all offseason, “Coach O” went out and made some moves. Orgeron took the advice of Joe Brady, who was the mind behind LSU’s 2019 offense, and hired Carolina Panthers’ quarterbacks coach Jake Peetz. Peetz will run the same offense that Brady did in 2019. He also hired Daronte Jones from the Minnesota Vikings as his defensive coordinator after just one disappointing season of Bo Pelini.

At quarterback, Myles Brennan and Max Johnson have been in a tight battle all offseason. After a recent injury to Brennan, it seems like Johnson has taken the lead. Johnson’s ability to run and create make him a nice fit for this run-pass option-based offense. Johnson also led LSU into Florida last year to pull off an upset over the No. 6 Gators.

There is plenty of talent at receiver — even with the loss of Arik Gilbert. Kayshon Boutte was one of the best in the conference last year as a freshman, and will only get better. Where LSU needs to improve is on the offensive line. The Tigers ranked 10th in the league in both sacks allowed and rush yards per game. If this group struggles the way it did in 2020, there won’t be a lot of improvement offensively.

Defensively, this group did not benefit from the scheme under Pelini. It wasn’t put in the right positions. As a result, the Tigers finished with one of the worst defenses in the nation. This side of the ball doesn’t lack talent. Derek Stingley could be the first defensive player off the board in the 2021 NFL Draft. Eli Ricks is elite as well.

This team was young last year, and it showed. Naturally, this team will grow up and will be better as a result. There are a lot of questions, but there is a lot of talent.

That is why LSU is perhaps the biggest wild card team in 2021. LSU will likely collect eight or nine wins, but neither six nor 11 would be shocking.

Auburn benefitted from some questionable calls in 2020 and finished 6-4. Of those four losses, two of them were blowouts to its biggest rivals in Alabama and Georgia. One of the others was a loss to a 2-8 South Carolina team. This rather disappointing season was the nail in the coffin for head coach Gus Malzahn. Under Bryan Harsin, this will be a much different-looking team.

Auburn has some questions offensively, but it has experience at quarterback and arguably the best tailback in the nation in Tank Bigsby. The offensive line returns everyone from a year ago. Still, you would like to see that group improve.

Quarterback Bo Nix has had a rocky ride in his first two seasons at Auburn. He has tons of talent, but played in a scheme where numerous quarterbacks became disappointments. Harsin and offensive coordinator Mike Bobo have a long track record with quarterbacks and hope to see improvement out of Nix.

There are bigger questions on the offense, especially at wide receiver. Auburn does have some breakout candidates, but it is young and inexperienced. Auburn did add transfer Demetris Robertson from Georgia for some experience, but we have yet to see what his role will be.

Defensively, Auburn made huge improvements. The Tigers have one of the best secondaries in the league. The duo of Roger McCreary and Dreshun Miller at cornerback might be one of the best in all of college football.

They also get Owen Pappoe and Zakoby McClain back at linebacker. Pappoe has a legitinate future in the NFL, and McClain led the conference in tackles last season. Auburn also added some transfers on the defensive line after a disappointing 2020 season, but guys like Colby Wooden and Derick Hall off the edge will be living in backfields all year.

This is one of the most slept-on teams in the SEC. Auburn was picked to finish fifth in the SEC West by the media, so we have Auburn playing the role of overachiever in 2021. Expect the Tigers to finish with between seven and nine wins.

Ole Miss saw some serious improvement under first-year head coach Lane Kiffin in 2020. Kiffin is trying to bring some swagger back to Oxford, and has done a good job so far.

Offensively, this team will be one of the best in the league — if not the best. Quarterback Matt Corral needs to cut down on turnovers, but he has season-altering talent when he is on. Even with the losses of Elijah Moore and Kenny Yeboah, there is plenty of talent out wide. The Rebels also have a deep backfield with Jerrion Ealy, Snoop Conner, and Henry Parrish.

Once again, defense might be the kryptonite for the Rebels. Quite frankly, it is still hard to find a strength on this side of the ball. Will they improve? Yes, but it is hard to be worse than they were last year.

Ole Miss might still be a year away from being a true force in the SEC. If Corral can be more consistent and the defense can take major strides, then this team has 9-win potential. For fans in Oxford, an 8-4 season would have to feel good.

Even with a 3-7 record, one could argue that Arkansas was the most improved team in the SEC last year. It pushed Georgia for three quarters in Week 1 and lost a heartbreaker to Auburn after a questionable call late in the game. Head coach Sam Pittman has things moving in the right direction again, and 2021 could be another sign of that.

Quarterback KJ Jefferson is a perfect fit offensively for coordinator Kendal Briles. He can throw the ball well, but is also very dangerous in the run game. Speaking of the ground game, the Razorbacks have a couple of options to turn to. The top guy should be Trelon Smith, who is seen as a scat back in Arkansas’ backfield. At receiver, Treylon Burks could make an argument to be the best in the league, but he’ll have help.

Defensively, the Razorbacks need some work. They hit the portal to try and fix problems at defensive tackle. Still, they have depth issues just about everywhere. They do have some productive guys on this side of the ball, but they need a lot more guys to step up.

It is a gauntlet of a schedule, but Arkansas has some positive momentum and could find a way to pull off an upset or two. Getting to six wins and a bowl would be huge for Pittman in year No. 2.

Mississippi State shocked the world by upsetting LSU in Week 1 last season. After that, everything was downhill for the Bulldogs.

They found stability at quarterback in Will Rogers, who should be the guy for the Bulldogs in 2021. They also found some production in the passing and running game from running back Jo’Quavious Marks. There will be production at rceiver, but mostly due to the air-raid scheme.

Mississippi State is pretty physical on defense. Martin Emerson Jr. is one of the better cornerbacks in the league, and is generating some serious NFL Draft buzz. The Bulldogs are also pretty experienced just about everywhere else.

Unfortunately, a winning record won’t be in the cards for Mississippi State in 2021. There are doubts about how effective head coach Mike Leach’s air raid will be in the SEC. Even if it succeeds, it will take more than just one offseason for the Bulldogs to become a force in the SEC.