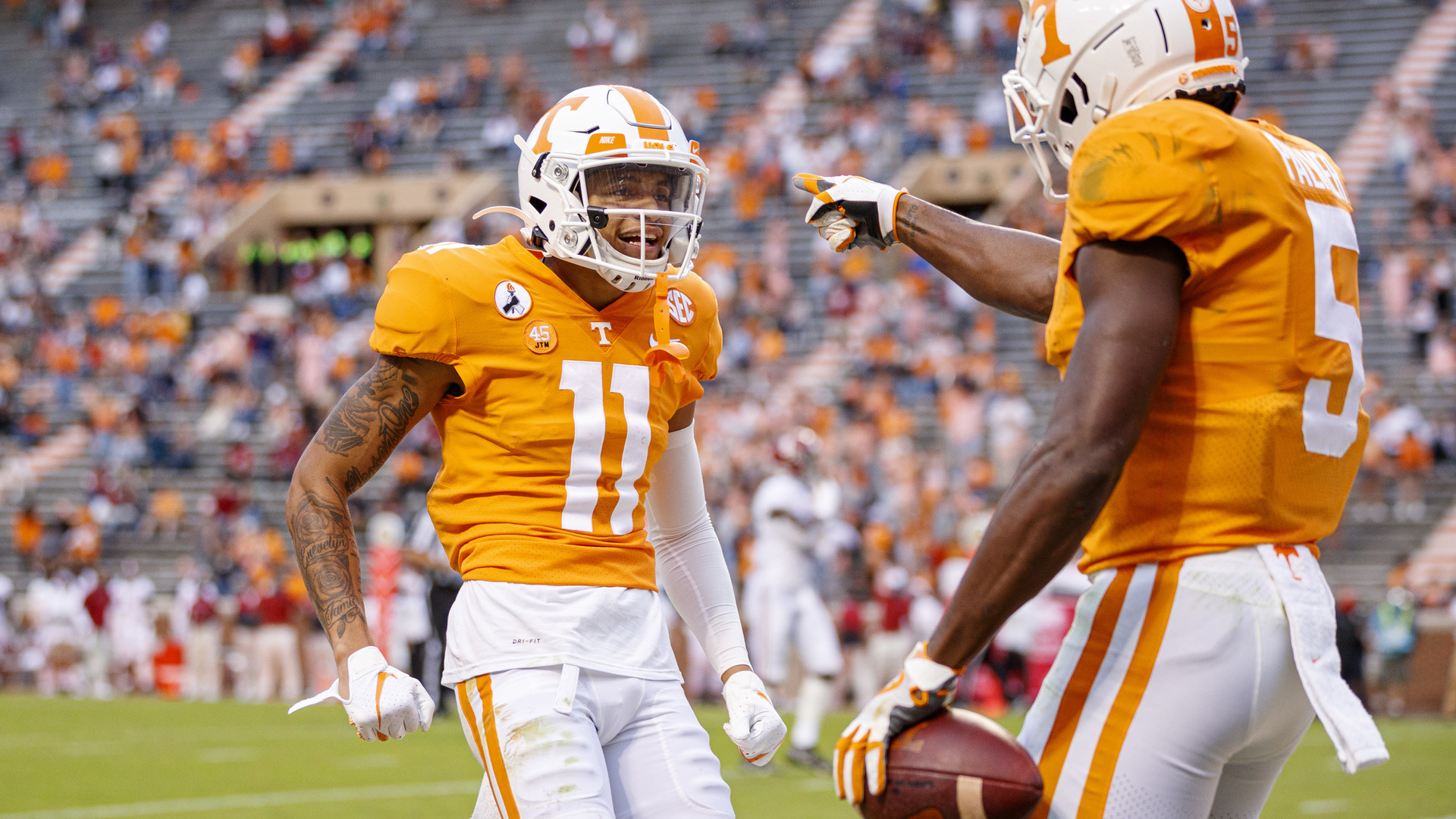 As we continue along with our “Buying Stock” series, we take a look at the wide receiver position in the SEC.

The SEC will be without some big-time receivers from years prior, but there are still many playmakers poised to breakout. Here, we take a look at the wide receivers groups as a whole.

Tight ends are included. As we look at which receiving corps to buy and which ones to sell, we start in the SEC East.

Florida will have to replace some big-time playmakers from a year ago, including the No. 4 overall pick in the 2021 NFL Draft in tight end Kyle Pitts. On top of that, Florida loses its top two playmakers out wide in Kadarius Toney and Trevon Grimes. Fortunately, the Gators do return Justin Shorter, Jacob Copeland, and Xzavier Henderson, but it will still be hard to fill the shoes of those before them. The Gators have some playmakers at tight end in Keon Zipperer and Kemore Gamble. Again, it will be very difficult to produce the way Pitts did.

Florida has talent in this group, but losing the amount of production it did surely hurts. We saw this same receivers group struggle mightily in the Sugar Bowl against Oklahoma, and that was with Kyle Trask at quarterback. There are some breakout candidates, but the production just won’t be the same for Florida in 2021.

Even with the loss of George Pickens to injury, Georgia will have one of the better wide receivers rooms nationally. Jermaine Burton and Kearis Jackson return after productive 2020 seasons, and there are still big-play threats like Marcus Rosemy-Jacksaint and Arian Smith. Perhaps most exciting is what Georgia has at tight end.

Darnell Washington and Arik Gilbert were two of the highest-rated tight end recruits ever; they’re both on the same team now. Washington proved to be an elite blocker last year, and showed promise late in the year as a receiver. On the other hand, Gilbert was super productive as a pass catcher during his freshman season at LSU. Gilbert’s future in Athens might be split out at receiver. He certainly has the skill-set to play out wide.

Even without Pickens, this group could be even better than it was in 2020. There’s still a chance that Pickens, who tore his ACL during the spring, returns at some point in the year too.

There’s a lot of factors here, but we ultimately chose to buy the Wildcats’ receivers. Why? They have a fine duo in Wan’dale Robinson and Josh Ali. On top of that, tight end Keaton Upshaw has shown potential as a pass catcher and could be a breakout player in 2021.

We still don’t know what Kentucky’s offense will look like under offensive coordinator Liam Coen, but the passing game will be more of a factor. Someone behind Robinson and Ali needs to step up as the third guy, but this is a group that will surely benefit from the portal and the new offense. Look for this group to take a huge leap forward in 2021.

This one was close, but the Tigers return most of their top guys from 2020. Damon Hazelton is the only loss from this group, but they hit the portal to add Mookie Cooper from Ohio State. Cooper didn’t see the field much in 2020 for the Buckeyes, but he is dangerous with the ball in his hands. Expect Cooper to play a big role in 2021.

Keke Chism and Tauksie Dove help round out this group, and there are still some guys to help provide depth. Head coach Eli Drinkwitz likes to get the ball to his playmakers. Fortunately for Mizzou, it has some dynamic ones out wide.

There are some playmakers for South Carolina, but losing Shi Smith to the NFL is a huge blow. It does return some guys with potential in OrTre Smith, Josh Vann, Dakereon Joyner, and Xavier Legette, but somebody needs to step up out of that group. Fortunately, South Carolina has a serviceable tight end in Nick Muse and hit the portal hard to bring in EJ Jenkins and Ahmareon Brown. Still, it will be hard to see much production from this group without Smith.

There are some breakout candidates in this receivers room, but we’re not taking any chances.

Expect a rough year for the Volunteers, but not in the passing game. First-year head coach Josh Heupel loves to throw the ball around, which will greatly benefit these quarterbacks and receivers. Velus Jones Jr. and Jalin Hyatt are the headliners of this group. Hyatt could be a breakout player in the SEC. Behind them, they will need somebody to step up. Fortunately, they have some newcomers from both the portal and 2021 class to help round out depth on the back end.

If a 1,000-yard receiver emerges from this group, don’t be the least bit surprised.

This is one of the most experienced groups for the Commodores, but it’s hard to see a lot of production coming. Amir Abdur-Rahman should be the top guy in 2021, and there is some surprisingly good depth behind them.

Still, it’s a group that lacks talent personnel-wise. From top to bottom, it could be the worst in the SEC when it comes to talent.