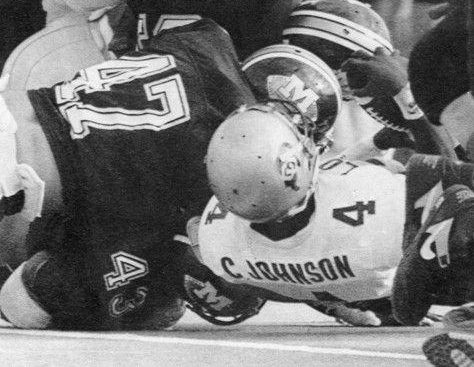 For most national championship teams, a little luck along the way is needed.

That was certainly true for Colorado in 1990. The Buffaloes went 11-1-1 in capturing their first and only national championship.

A couple of those wins were highly-controversial, including the one that took place on this day 30 years ago. Colorado was granted a fifth down on which it scored the game-winning touchdown in a 33-31 win over Missouri.

After a rough start to the season that included a tie against Tennessee and a loss at Illinois, Colorado seemed to be finding itself. The Buffaloes were coming off consecutive wins over ranked teams in Texas and Washington as they made their way to Faurot Field on Oct. 6, 1990.

Missouri was 2-2, but coming off an impressive 30-9 win over No. 21 Arizona State. As time ticked away late, the Tigers appeared on the verge of notching a second signature win in as many weeks in what would be the Big 8 opener for both schools.

Colorado trailed 31-27 with less than a minute to play. On a drive that started inside its own 15-yard-line, Colorado was now just three yards away from the winning touchdown as the clock ticked down to 31 seconds.

With the clock running, Colorado quarterback Charles Johnson spiked the ball to stop the clock. After consecutive runs by Eric Bieniemy ended up short of the goal line, it looked as though time would run out on the Buffaloes, but the clock was inadvertently stopped following the run.

On what would be the fourth play of the Colorado series, Johnson again spiked the ball to stop the clock with two seconds. The down marker prior the spike however, read “3”.

Instead of a turnover on downs, the Buffaloes were given one last play from the Missouri 1-yard-line. Johnson kept the football and scored from a yard out as time expired to give Colorado the thrilling win.

Missouri would take a 21-17 lead into the final quarter of a contest that was tied three times. Playing in place of injured starter Darian Hagan, Johnson found Mike Pritchard on a 70-yard touchdown pass early in the final period to give the Buffaloes a 24-21 lead.

After the teams traded field goals, Missouri took over with less than four minutes to go. It took the Tigers just 69 seconds to go back in front on Kent Kiefer’s third touchdown pass of the day — his second to Damon Mays. The 38-yard scoring strike gave Missouri a 31-27 lead with 2:32 to go.

Colorado took over on its 12-yard-line on the ensuing drive. Johnson’s winning touchdown on “fifth down” capped a 15-play, 88-yard march.

Bieniemy rushed for 217 yards and a touchdown to become Colorado’s all-time leading rusher. Pritchard touched the ball just twice for the Buffaloes — one rush and one reception — but both resulted in touchdowns while combining to go 138 yards. Defensively for Colorado, linebacker Greg Biekert and defensive tackle Garry Howe combined for 21 tackles, including five for loss.

In the loss, Kiefer passed for 326 yards and three touchdowns for Missouri. Mays led all receivers with 153 yards and two touchdowns. Colorado’s Dave McCloughan had the game’s only interception. Harry Colon led the Missouri defense with 16 tackles, including three for loss.

Still a Topic of Controversy

To this day, the infamous “fifth down” game lives in Colorado lore. Colorado coaches and players have claimed that had the down marker been correct, Johnson would not have been advised to clock the ball. Complaints about the field conditions were also prevalent from the Buffaloes.

For the rest of the regular season, Colorado didn’t play a game decided by less than nine points. The Buffaloes would go on to beat Notre Dame 10-9 in the Orange Bowl to finish No. 1 in the final AP Poll.

Missouri fans, players and coaches will maintain that a victory was stolen that day. The Tigers would go on to finish 4-7 with three losses decided by two points or less. The most notable of those came on this day three decades ago.