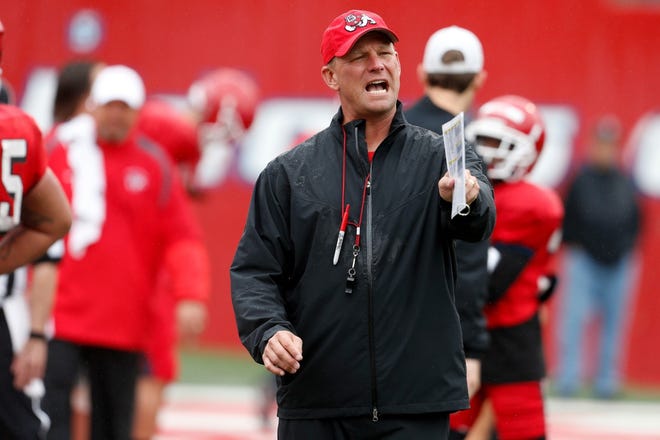 Just two weeks after the firing of Jimmy Lake, the Washington Huskies have a new head coach – Kalen DeBoer. Matt Zenitz of On3 broke the news Monday afternoon before the UW athletic department made it official at 2:36 PM PST on the same day.

DeBoer has spent the past two seasons as the head coach of Fresno State, where he had an overall record of 12-6. The Bulldogs finished 2nd in their division in the 2021 season, with a 9-3 record. From 2010-2018, he spent his time as offensive coordinator at Southern Illinois, Eastern Michigan and Fresno State. He then found his way into Power 5 football in 2019 as the offensive coordinator at Indiana. His offense averaged 443.6 yards per game, second-best in the Big Ten.

DeBoer also found success at lower levels before making his way into Division 1 coaching. He spent five seasons at the University of Sioux Falls (then NAIA), where he won four Great Plains Athletic Conference (GPAC) titles and three national championships. He has an overall record of 67-3 at the NAIA level.

To put it simply – DeBoer has been a winner wherever he’s gone. With his history, it seemed like he was due for a big-time coaching job. He now has that job with the Washington Huskies.

WHAT THIS MEANS FOR WASHINGTON

There are still some questions about the DeBoer’s qualifications as a Power 5 Head Coach – even with his winning ways. Will his success in the Mountain West translate to the Pac-12? Every coach has to take their first step eventually, and it seems like DeBoer won’t struggle to compete in terms of scheme. Even with the recent news of Lincoln Riley heading west, DeBoer will be in good position to compete, as long as he can fill a few gaps.

The support staff that DeBoer brings in will be the biggest leading indicator of success or failure. Recruiting is a concern – 2021 and 2022 classes at Fresno State only ranked 72nd and 86th nationally, according to 247Sports. These problems are easily addressed if DeBoer and the administration work together to bring in the right staff. Even so, DeBoer has created good relationships wherever he has been. Players like playing for him, and he has done well at finding gems in the transfer portal at Fresno.

The importance of the additional hires is what makes this move a risk, as experts feel that DeBoer alone is not the solution to all of Washington’s problems. Some of these question marks were also mentioned with UW’s previous Mountain West Head Coach hire; however, Chris Petersen turned out to be a steal for the Huskies. For now, Montlake can only hope that DeBoer is the one who will bring Washington back to its winning ways like he has at other college football programs.