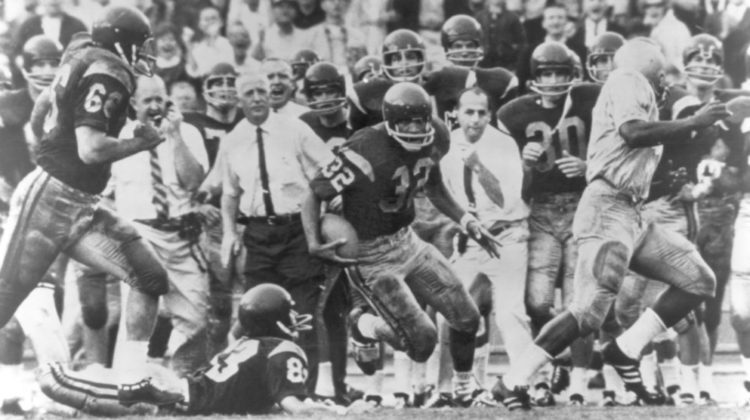 Throughout the history of the rivalry, it hasn’t been uncommon for a Rose Bowl berth to be on the line when USC and UCLA meet. There have been many memorable contests between the schools over the years, but perhaps the most the memorable is the one that took place on this day 55 years ago.

In what would be a top-5 showdown, blocked kicks and O.J. Simpson touchdowns would be a theme. His 64-yard scamper in the fourth quarter ultimately lifted the Trojans to a 21-20 victory.

At 7-0-1, UCLA was ranked No. 1 in the country as it arrived at the Los Angeles Memorial Coliseum on Nov. 18, 1967. Third-year head coach Tommy Prothro had led the Bruins to close wins over USC in each of the previous two seasons.

For most of the season, it was USC that held the top spot in the polls. The Trojans started 8-0, but were coming off an unthinkable 3-0 loss at Oregon State. USC had fallen to No. 4 in the polls, but was one win from claiming the Athletic Association of Western Universities (referred to as the Pac-8 at the time) title and a berth in the Rose Bowl.

Blocked Kicks and Simpson Save USC

Greg Jones scored on a 12-yard run to give UCLA an early 7-0 lead, but throughout the day, mistakes would prove costly for the Bruins. A 55-yard interception of a Gary Beban pass by linebacker Pat Cashman would ultimately tie the game for USC.

After a missed field goal by UCLA, the Bruins failed to fall on a fumble following a long reverse run by USC’s Earl McCullouch. Later in the drive, Simpson scored from 12 yards out to give the Trojans a 14-7 halftime lead.

The third quarter and early parts of the fourth would belong to UCLA. After Beban’s 53-yard touchdown pass to George Farmer tied the game in the third, his toss to Dave Nuttall in the fourth gave UCLA a 20-14 lead. As he had done on two field goals, however, USC’s 6-foot-8 Bill Hayhoe blocked the extra point to keep the deficit at six.

With less than 11 minutes to play, the UCLA defense was one play from getting the ball back for the offense. Facing 3rd-and-7 from his own 36-yard-line, USC quarterback Toby Page audibled to a run play. The Bruins were not ready for it.

On a give to Simpson, the standout got a key block from his fullback, bounced to the outside, made one cut and raced 64 yards for the touchdown. The ensuing PAT put USC up 21-20 and the UCLA offense never threatened again.

Beban passed for 301 yards in the contest and would go on to become the only UCLA player to win the Heisman Trophy. His costly pick-6, however, played a vital role in the loss. The Bruins lost again the following week to Syracuse to finish 7-2-1 and No. 10 in the final Coaches Poll.

As he did against UCLA, Simpson rushed for two touchdowns as USC beat No. 4 Indiana in the Rose Bowl to close the year, 14-3. The Trojans finished No. 1 atop the polls and as national champions for the second time in six years under head coach John McKay.

The following year, Simpson won the Heisman Trophy. His 177-yard, 2-touchdown performance against UCLA, however, won USC a berth in the Rose Bowl and ultimately, a national championship. It came on this day 55 years ago.