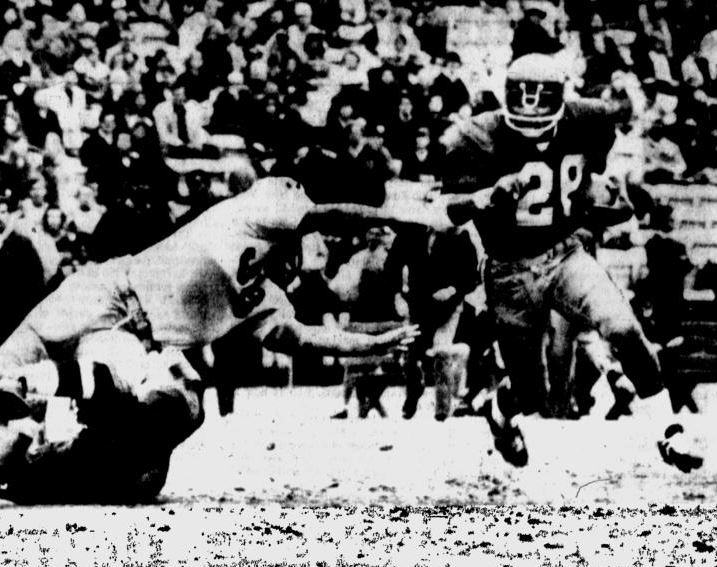 The rivalry between USC and Notre Dame hasn’t had the implications over the last few decades that it once did, but there is still no love lost.

The schools have played some memorable contests over the years, including one that took place on this day 50 years ago. In the Los Angeles Coliseum, the Trojans handed undefeated Notre Dame its only loss of the season, 38-28.

For USC, a season that started with promise was spiraling out of control. After beating No. 16 Alabama in Birmingham and tying No. 9 Nebraska to open the year, the Trojans seemed like true contenders. But after a 3-0-1 start, USC had dropped four of six contests at it arrived at the Los Angeles Coliseum on Nov. 28, 1970.

Notre Dame was ranked No. 4 in the country, 9-0 and had a defense that looked unstoppable. The Fighting Irish had pitched three shutouts and only three opponents had scored in double figures.

To that point, no team had scored more than 14 points against Notre Dame. On a day where rain poured down, USC eclipsed that total before the end of the first quarter.

Notre Dame quarterback Joe Theismann passed for a school record 526 yards for the Fighting Irish, but got the scoring started with his legs. Theismann’s 25-yard touchdown run capped a 12-play, 80-yard opening drive and gave Notre Dame a 7-0 lead. That was the last lead it would hold.

USC used back-to-back touchdown runs from Clarence Davis to take its first lead of the day. The Trojans capped the 21-point first quarter with a 45-yard touchdown pass from quarterback Jimmy Jones to Sam Dickerson.

Notre Dame answered in the second quarter when Theismann fired his first of two touchdown passes — a 9-yard strike to John Cieszkwoski. That cut the lead to 21-14, but the Fighting Irish would never be within a score again.

Ron Ayala’s short field goal pushed the lead to 24-14, where it stood at halftime. In less than a 1-minute span in the third quarter, things went south for Notre Dame.

Following a Notre Dame turnover that set up the Trojans in the red zone, Pete Adams got to achieve an offensive lineman’s dream when he pounced on Mike Berry’s fumble into the end zone. With the score now 31-14, Theismann was sacked and stripped of the ball by USC’s Willie Hall on Notre Dame’s next possession. Defensive tackle John Vella recovered in the end zone for the Trojans’ second touchdown in 42 seconds.

That would be all USC would need.

In addition to his school record for passing yards, Theismann totaled four touchdowns, but it was not enough. Before the third quarter was over, he found Larry Parker for a 46-yard touchdown. Theismann capped the scoring with a 9-yard touchdown run — his second of the day — in the fourth quarter.

Theismann wasn’t the only signal caller to break school records that day. Jones surpassed Steve Sogge’s single-season completion mark at USC. Davis powered the offense with 103 yards in the victory.

The 1970 season was the first time in five years that USC didn’t make the Rose Bowl, but the end to the season was satisfying nonetheless. USC went on to finish No. 15 in the final AP Poll.

Notre Dame bounced back with a 24-11 win over No. 1 Texas in the Cotton Bowl. The Fighting Irish would finish No. 2 in the final AP Poll behind Nebraska. Nebraska finished 11-0-1 with the lone non-victory being a tie against USC — the same USC that handed Notre Dame its only loss on this day a half-century ago.