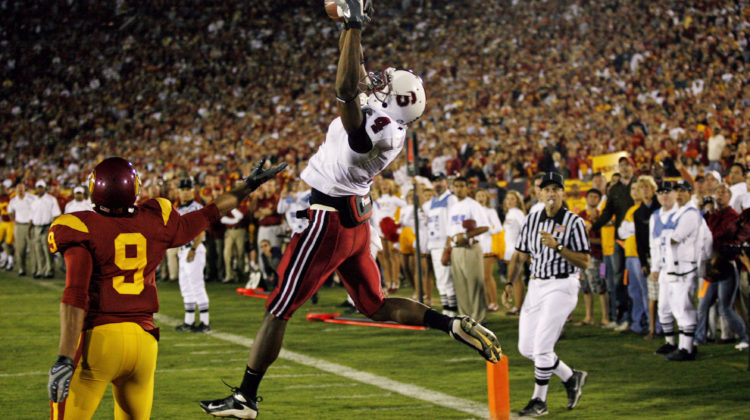 Through the middle part of the 2000s, few would argue that anyone other than USC, under Pete Carroll, was the premier power in college football. From 2003 to 2005, the Trojans won 34 straight games, had two Heisman Trophy winners and claimed a pair of national championships.

Some of those contests were later vacated, but USC won the Pac-10 every year from 2003 to 2008. One of its more forgettable moments from that era, however, came on this day 15 years ago.

As a 41-point favorite, the Trojans were stunned at home by Stanford. A late touchdown was the difference as the Cardinal pulled off a stunning 24-23 victory.

USC was ranked No. 1 in the Coaches Poll, No. 2 in the AP Poll and was riding a 35-game home winning streak as it arrived at the Los Angeles Coliseum on Oct. 6, 2007. At 4-0, the Trojans were coming off a hard-fought win against Washington.

Under first-year head coach Jim Harbaugh, Stanford was 1-3 and 0-3 in Pac-10 play. The first three conference losses for the Cardinal had each come by at least 24 points and by an average margin of 30 points. Stanford arrived as nearly a 6-touchdown underdog.

Stanford Does the Unthinkable

It was a sluggish night for USC to say the least, but it still appeared as though the Trojans would sleepwalk to victory. USC led by nine on three separate occasions, including early in the fourth when quarterback John David Booty threw his second touchdown pass of the night — a 46-yard strike to Ronald Johnson.

Booty passed for 364 yards on the night, but was intercepted four times. Austin Yancy returned a Booty pick 31 yards for a touchdown in the first half to get the Cardinal on the scoreboard.

That was Stanford’s only score before Anthony Kimble found the end zone on the first play of the fourth quarter. Stanford answered the Johnson touchdown with a field goal from Derek Belch. With less than six minutes left, the Cardinal were within six, 23-17.

With USC facing 3rd-and-19 with less than three minutes to go, Wopamo Osaisai intercepted Booty to give the Cardinal the ball in Trojan territory. Stanford reached the red zone, but following a holding penalty, the Cardinal faced 4th-and-20 from the 29-yard-line.

USC was one play from victory, but Tavita Pritchard found then wide receiver Richard Sherman for 20 yards and a first down. The Trojans would again be one play from victory after a Stanford penalty pushed the Cardinal back to the 10-yard-line on 4th-and-goal. With 48 seconds left, Pritchard found Mark Bradford in the back of the end zone for the touchdown to give Stanford its first lead, 24-23.

There was still plenty of time for USC, but Booty’s desperation heave on 4th-and-16 was picked off by Bo McNally. The Cardinal ran out the clock to complete the unthinkable.

For Stanford, there was no miraculous turnaround. The Cardinal, however, were a better team moving forward. They finished the year with a record of 4-8.

USC would lose again before the month was over — this time to No. 5 Oregon. The Trojans, however, circled the wagons and closed the year on a 5-game winning streak. A 49-17 rout of Illinois in the Rose Bowl gave USC an 11-2 record and an final AP ranking of No. 3.

Harbaugh would go on to lead Stanford to two BCS bowls in 2010 and 2011 and one Pac-12 title in five years in Palo Alto. In his first season, however, Stanford completed what was the biggest upset in college football history at the time. It came in the Los Angeles Coliseum on this day 15 years ago.