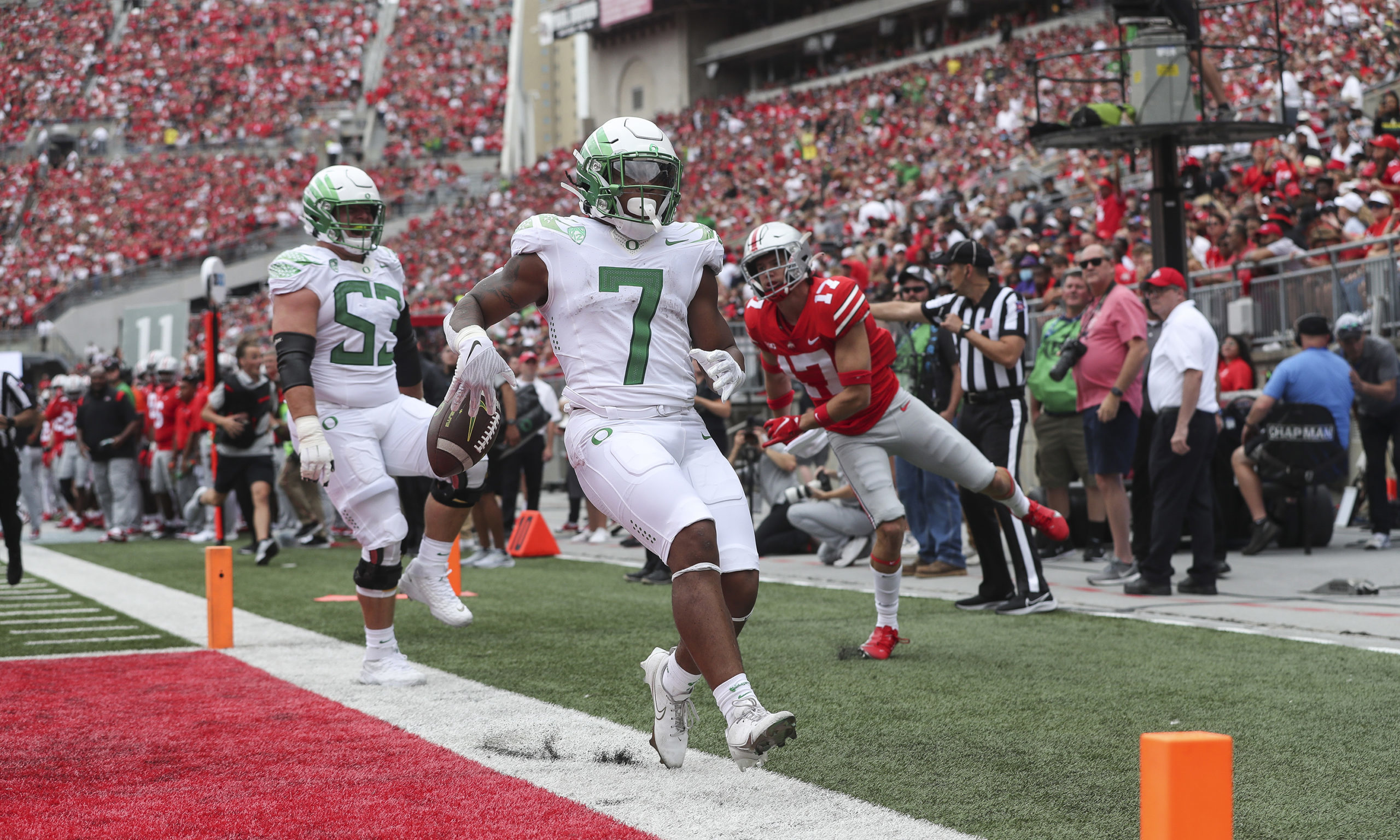 Others witnessed scares, but two top-10 teams went down this week.

The highest ranked team to fall was No. 3 Ohio State. The team to knock it off?

In a contest that begin at 9 a.m. PT, the Ducks made the cross-country trip to Columbus and knocked off the Buckeyes, 35-28. With the impressive road win, Oregon earns this week’s distinction of CFBHome/Fifth Quarter Team of the Week.

Oregon never trailed in the contest and a big reason for that was running back CJ Verdell. Verdell powered a rushing attack that tallied 269 yards and an offense that went for more than 500 total.

Verdell finished with 161 yards on 20 carries and three total touchdowns, which included a 77-yard scamper. Verdell and Moliki Matavao each caught touchdowns from Anthony Brown. Travis Dye added a rushing touchdown in the victory.

Defense Stands Tall With Back Against the Wall

Oregon’s defense bent a lot on Saturday. Fortunately for the Ducks, it never broke.

Oregon allowed 612 total yards in the victory, including 484 passing to quarterback C.J. Stroud. Three times however, the Ducks turned the Buckeyes away in Oregon territory.

Without star defensive end Kayvon Thibodeaux, Oregon came through when it mattered. The game’s only turnover also turned out to be a big one as Verone McKinley III intercepted Stroud with less than three minutes to play to help seal the win.

After having to rally in the fourth quarter to beat Fresno State in Week 1, many questioned how good the Ducks really were. Those questioning now have answers.

For Oregon and head coach Mario Cristobal, the victory was its first over a top-5 team since beating Utah in the 2019 Pac-12 Championship. It was the first on the road since beating Andrew Luck and No. 3 Stanford in 2011.

Following the victory, the Ducks moved up eight spots in the AP Poll to No. 4. They were also fourth in the Amway Coaches Poll after a 7-spot climb.

Ohio State fell six spots to No. 9 in the AP Poll. The Buckeyes suffered an 8-spot drop to No. 11 in the Coaches Poll.

Now 2-0 for the season, Oregon will return home for what may be its easiest contest of the season against FCS Stony Brook. Stony Brook is off to a 1-1 start.

The teams will meet on Saturday at 7:30 p.m. ET on Pac-12 Network. Ohio State returns home to face Tulsa.