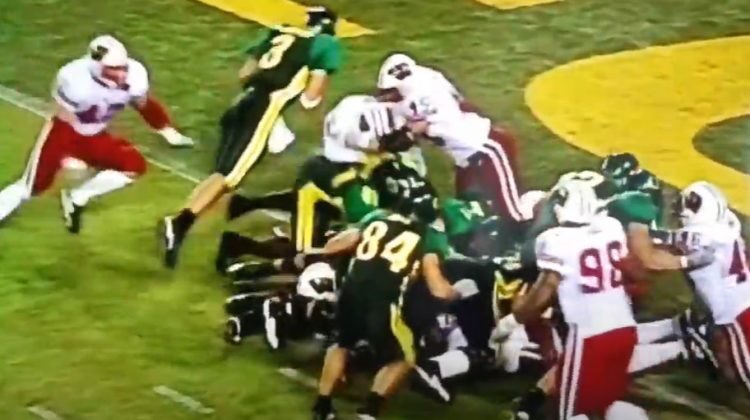 The 2001 season was a special one for Oregon.

Harrington and the Ducks started that campaign on this day 20 years ago with a memorable victory. Harrington’s late touchdown lifted Oregon past Wisconsin in a top-25 match-up in Eugene, 31-28.

Harrington had earned the nickname “Joey Heisman” as the 2001 season got underway on Sept. 1, 2001. The seventh-ranked Ducks were coming off a 10-win season and top-10 finish in 2000 as they began the year at Autzen Stadium.

Wisconsin was ranked No. 22 and looking to make a statement. The Badgers had defeated Oregon the year before in Madison and were looking to sweep the home-and-home. After topping Virginia in the Eddie Robinson Classic, Barry Alvarez’s team fought valiantly in Eugene.

In its previous two possessions, Oregon had failed to get a first down and turned it over once as the clock ticked under seven minutes. With the ball on the Oregon 22-yard-line, Harrington went to work.

Harrington connected on 24-yard completions to Jason Willis and Justin Peelle to move the Ducks into Wisconsin territory. Onterrio Smith then ran for 19 yards to the Wisconsin 11.

On a designed sneak, Harrington waited for a hole to open up before diving in for the go-ahead touchdown. With 4:14 to go, the Ducks were back in front, 31-28.

Wisconsin would get two more possessions, but both were unproductive. After quarterback Jim Sorgi fumbled on third down, the final drive for the Badgers reached Oregon territory, but ended on downs.

From there on out, the teams alternated touchdowns. Harrington’s second touchdown pass of the day to Peelle put the Ducks in front 17-14 midway through the third quarter, but Anthony Davis responded two plays later with a 69-yard touchdown.

Maurice Morris scored from a yard out late in the third to give Oregon a 24-21 lead after three. Sorgi scored on a keeper with less than 10 minutes to play in the fourth to cap the scoring for Wisconsin.

The 2001 opener featured a monster game for a number of players. Harrington completed fewer than 50% of his attempts, but passed for 279 yards and accounted for four total touchdown. Smith led the Ducks with 88 yards rushing on just eight carries.

Sorgi finished with 231 yards passing. Half of his 16 completions went to Lee Evans, who totaled 168 yards receiving. Davis was the game’s leading rusher with 130 yards.

Unfortunately for Wisconsin, the loss was a sign of things to come in 2001. The Badgers would finish with a record of just 5-7. It remains their last losing season.

The Ducks, on the other hand, would go on to finish 11-1 and ranked No. 2 in the AP Poll — their highest ever. Oregon capped its magical season with a 38-16 thrashing of No. 3 Colorado in the Fiesta Bowl. That memorable campaign began with a memorable victory that came on this day two decades ago.