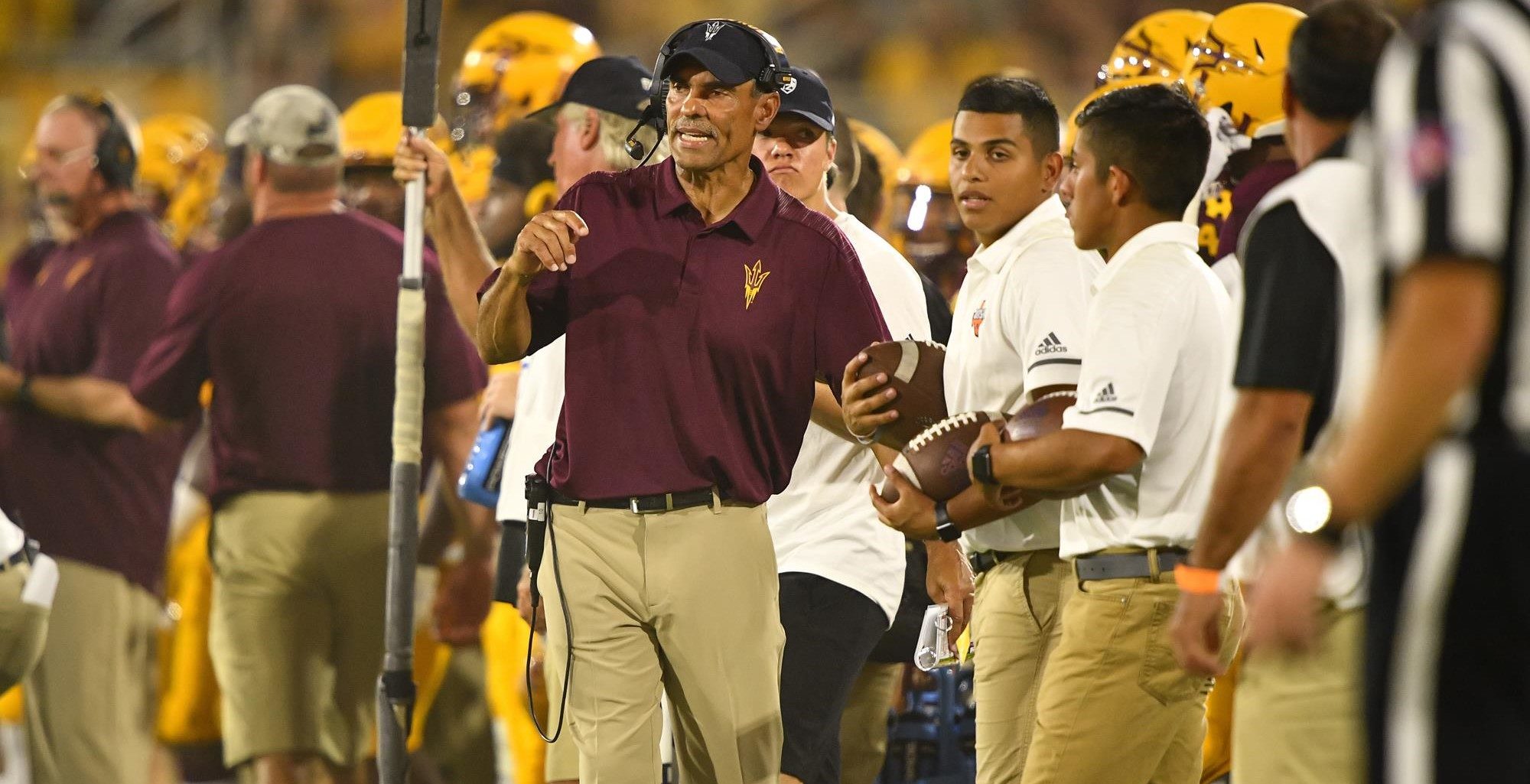 On June 14, George Wrighster reported that he was “on the verge of a story potentially to be broken in the next week or two that will rock the college football world, ruin legacies, and could impact the balance of power out west.”

While the news that surfaced two days later is not quite “world-rocking,” it is still concerning and going to make a huge impact on the Arizona State football program and the Pac-12 this upcoming season. And apparently, this news is only the tip of the iceberg, which might foreshadow worse news to come in the following days.

But here is what we know for sure: Arizona State football is under investigation.

Pete Thamel of Yahoo Sports reported that an anonymous source sent a collection of documents to the Arizona State athletic department. There were pages of emails, screenshots, and other evidence that pointed to the Arizona State football staff breaking recruiting rules.

The violations mostly stem from the recruiting dead period that was in place until June 1. Division I programs did not allow any in-person interactions for 15 months. Arizona State illicitly hosted upwards of 30 recruits during this time.

The evidence states that most of the football staff was in on the activities taking place. Recruits would bring their families and friends on campus visits. They would see all of the team’s facilities and meet with football program personnel.

Recruits were even on campus during the season. Everything about these visits seemed official, with coaches even referencing “official visit weekends” in their staff meetings. These activities became normal in the day-to-day operations of the program.

Photo evidence with recruits even shows that head coach Herm Edwards was in on the operation. This leaves the entirety of these violations on his shoulders. Edwards has declined to comment on any involvement in the incident so far. Many internal staff members suspect the investigation will lead to people losing their jobs within the program.

WHAT CAME OF ARIZONA STATE’S VIOLATIONS

The fascinating part of these violations surfacing is that they did not result in major recruiting success for Arizona State. The Sun Devils finished this cycle with the 52nd-ranked national recruiting class, according to the 247Sports Composite, which is their worst since 2011. While they found some success in other states, Arizona State failed to land any of the seven 2021 blue-chip prospects that the state of Arizona produced.

As a matter of fact, Arizona State only landed one of the 50 top prospects in its state. It lost out on the state’s top recruits to the likes of Oregon, UCLA, California, Utah, and out-of-conference schools Ohio State, Minnesota and Iowa State. This lack of success makes this investigation more sour, as Arizona State was caught cheating for subpar results.

Arizona State is off to a decent start in the class of 2022, landing three 4-star talents from the states of California and Florida. With the investigation in place, however, punishments may scare away potential recruits and lead to an exodus of the program from current players and commits.

KEEPING THE TEAM TOGETHER

These allegations bring up an interesting dilemma for the Sun Devils this coming season. Depending on the punishments handed out, Arizona State could be looking at a downward trajectory for the near future. It creates an issue if any players will want to transfer following the investigation.

With Pac-12 teams already competitive in recruiting, we could see a lot of ASU’s current talent get picked off by teams like Oregon, UCLA, and Utah. This is also not mentioning in-state rival Arizona. Any recruits switched from one school to the other could change the power balance in the rivalry, as the Sun Devils have won four in a row over the Wildcats.

Edwards is another factor to consider. The team might still be able to find success if he sticks around. Edwards has brought in a new culture to the program and his players really believe in his philosophy.

Landing quarterback Jayden Daniels in the 2019 class was a testament to how well Edwards can sell the program to out-of-state kids. There are still questions, however, whether Edwards can get Arizona State to that next step. He got the program back to relevance in the conference, but still has no Pac-12 championship game appearances.

Last season likely would have been the best chance, but COVID-19 threw the Sun Devils off track with three canceled games. Edwards has a lot to prove during ASU’s 2021 season if he is still around. With the scandal fresh in everyone’s mind, all eyes will be on the Sun Devils to see what comes of the aftermath.

Without Edwards, it is hard to say how the program would respond. It would have to scramble to find an interim head coach. The head coach would likely stick to the same schemes, but it is hard to replicate the culture and trust Edwards has built with his team. The Sun Devils could only hope that they do enough to replicate it and keep the locker room.

POWER IN THE PAC

The scandal could find its way affecting the entire conference. Arizona State is projected to be competing for the top spot in the Pac-12 South this upcoming season. It also will be competing against Washington, Oregon State, and Washington State from the North.

Washington will likely be a big game for the squad to prove itself on a bigger stage. Dropping a game to Oregon State and/or Washington State could put a dent in its run at the Pac-12 championship.

Most likely, the Sun Devils will still be competitive. Still, we can not be certain how the team will be affected until after the investigation is concluded.

The investigation will likely not do much in terms of conference image. This case only involves Arizona State at the moment. The conference was also in a time of transition and understandably may not have known that this was occurring.

The conference is in good standing for now. Wrighster did mention on Twitter that the Arizona State scandal was only “the tip of the iceberg” as far as West Coast scandal goes. If this is anything to go off of, we could be looking at more news in the coming weeks.

For now, this is all we know of. And if anything was made clear, it was that Edwards believes in his own philosophy – at least, in terms of recruiting.