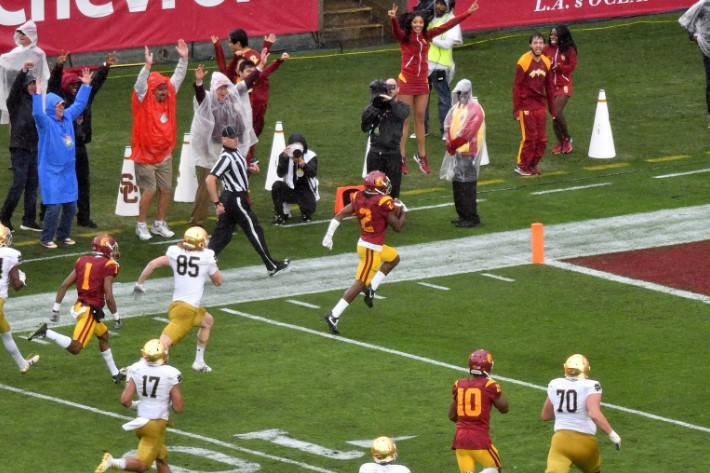 The Pac-12 South didn’t have as much national success as the North division, but there were still great seasons. Here’s a look back on the best season for every Pac-12 South school over the last decade:

Record: 10-3, beat Duke in Sun Bowl, 36-31
Final Ranking: No. 12 AP; No. 14 Coaches
Key Players: Jaelen Strong, WR; Jamil Douglas, G; Damarious Randall, S
Overview: Arizona State enjoyed back-to-back 10-win seasons in 2013 and 2014. Although the Sun Devils won the Pac-12 South in 2013, the 2014 campaign saw Arizona State achieve its highest AP ranking since 1996. During the season, the Sun Devils knocked off four ranked teams in a 5-game stretch and closed the year with its first bowl win over a team from a major conference since 2005.

Record: 10-4, lost to Oklahoma State in Alamo Bowl, 38-8
Final Ranking: No. 17 AP; No. 15 Coaches
Key Players: Phillip Lindsay, RB; Jimmie Gilbert, LB; Chidobe Awuzie, CB
Overview: Although Colorado was handled by Washington in the Pac-12 Championship and Oklahoma State in the Alamo Bowl, it enjoyed its best season since 2001, its first top-25 finish since 2002 and its first conference title game and bowl appearances since 2005. Colorado clinched the Pac-12 South and the 10-win season with back-to-back wins over ranked Washington State and Utah teams to close the regular season.

Record: 10-3, defeated Kansas State in Alamo Bowl, 40-35
Final Ranking: No. 10 AP; No. 10 Coaches
Key Players: Brett Hundley, QB; Myles Jack, LB; Ishmael Adams, CB
Overview: UCLA won the Pac-12 South in 2012, but enjoyed 10-win seasons in each of the next two years under Jim Mora Jr. In 2014, the Bruins finished in the top 10 for the first time since reaching the Rose Bowl in 1998. That season, UCLA knocked off four ranked opponents and beat rival USC for a third straight season.

Record: 10-3, beat Penn State in Rose Bowl, 52-49
Final Ranking: No. 3 AP; No. 5 Coaches
Key Players: Sam Darnold, QB; Ronald Jones II, RB; Adoree’ Jackson, CB
Overview: USC won its only Pac-12 title and had its highest win total of the 2010s in 2017. Still, the year prior gets the nod is 2016 as the Trojans finished with their first top-5 ranking and first Rose Bowl victory since 2008. USC finished second to Colorado in the Pac-12 South, but handed the Buffaloes their only conference loss and closed the season on a 9-game winning streak after a 1-3 start. USC scored 17 unanswered points over the final 8:15 to stun Penn State in the Rose Bowl.

Record: 11-3, lost to Texas in Alamo Bowl, 38-10
Final Ranking: No. 16 AP; No. 16 Coaches
Key Players: Zack Moss, RB; Leki Fotu, DT; Jaylon Johnson, CB
Overview: Utah had three 10-win seasons during the 2010s, but its highest total was 11 this past season. The Utes closed the season on an 8-game winning streak before falling handily to Oregon in the Pac-12 Championship and Texas in the Alamo Bowl. A 33-28 victory over Washington was Utah’s only win by fewer than 18 points. The Utes recorded their highest win total since the 2008 perfect season and their highest AP ranking of the decade.