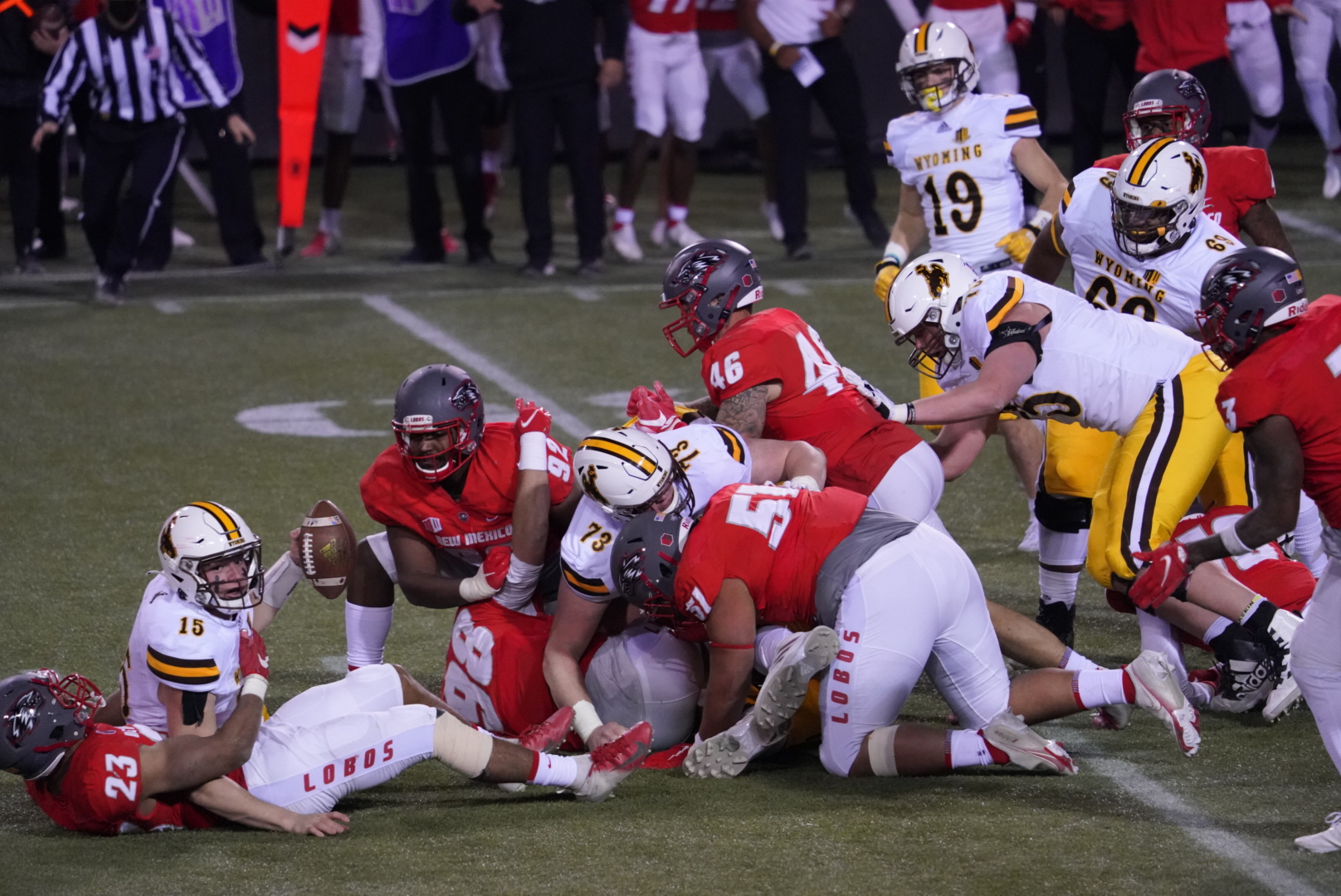 You may be wondering who are the Las Vegas Lobos?

An attempt at an XFL comeback?

No, it happens to be the University of New Mexico Lobos. The Lobos were forced to relocate their entire football team from Albuquerque to Henderson, Nev. – a suburb of Las Vegas – due to COVID-19 concerns. So it was born — the Las Vegas Lobos.

A Sequence Of Events

Let’s backtrack a little. On Aug. 10, the Mountain West Conference – where New Mexico is a member of – decided to officially postpone the 2020 football season until the spring.

The move was a result of the ongoing pandemic. The Mountain West wasn’t alone. The Big Ten, Pac-12, and MAC also originally axed their fall slate for safety precautions.

Flash forward to Sept. 25. The conference had a change of heart following a successful start to the season for the six conferences that had committed to playing in the fall. The Big Ten, Pac-12, MAC, and now Mountain West were back in.

In this case, the latter set course for an Oct. 24 start date.

There was only one problem. New Mexico had no place to play.

State and local restrictions, topped with COVID-19 cases rising in the Albuquerque area, forced the Lobos to relocate if they were to play a 2020 season. They would not have been able to host any games at University Stadium on campus.

At one point, there was little hope for football in 2020 for the Lobos. State restrictions were continuing to tighten.

No more than five people could gather, preventing any chance of playing in their home state. The only other FBS member in the state, New Mexico State — an independent — was set on playing in the spring.

The Lobos were scheduled to open their season at home on Halloween against San Jose State. School officials relocated that game to San Jose.

The hope was to get approval the following week for New Mexico to gather more than five members of the team to actually hold something of a football-type practice.

On they were, the Lobos flew to San Jose without even holding a full team practice. They left still extremely uncertain about what the future held for the 2020 season.

The team then returned to Albuquerque on Sunday morning following a 38-21 defeat to the Trojans — only to find out they had news 10 times worse than a loss. Their proposal for a waiver of the 5-person limit rule had been denied.

New Mexico was left with three options. The Lobos had to either play every game on the road. They could find an alternate home stadium. The other option was to cancel the season.

Fellow Mountain West member UNLV had just moved across town from its longtime home of Sam Boyd Stadium to Allegiant Stadium, which it shares with the NFL’s Las Vegas Raiders. The Rebels’ former home since 1971 was left empty. That created the perfect opportunity for Nunez to swoop in and get UNLV athletics director Desiree-Reed Francois on the phone.

After a long discussion that Sunday between Francois and Nunez, the Lobos were on a flight to Las Vegas just 24 hours later. They arrived ready to make the Hilton Lake Las Vegas Resort and Spa their home for the next two months.

When the team arrived at Sam Boyd Stadium to practice that afternoon, it was the first time the Lobos were able to practice as a team since the Mountain West announced plans to resume play. After moving loads of equipment, technology, and other necessities, New Mexico was poised to make Las Vegas its new home for the 2020 season.

With the limited practice time, the program uprooting, and the unusual circumstances, it hasn’t been the best year for New Mexico football. But after all this team went through, they’re probably just happy to be playing.

The Lobos started off 0-5, but picked up their first win last weekend in a “home” upset over Wyoming. It was a huge win for the program with all they’ve gone through.

They’ll have one more shot this weekend, as New Mexico will become the first team in modern college football history to not host one game in an entire season. It will welcome in Fresno State for its second home contest.

Studying in ballrooms, working out in hotel fitness centers, and living in a hotel room for two months will finally be in the past.

The Lobos and Fresno State will kick at 7:30 p.m. PT. It will be televised on Fox Sports 1.