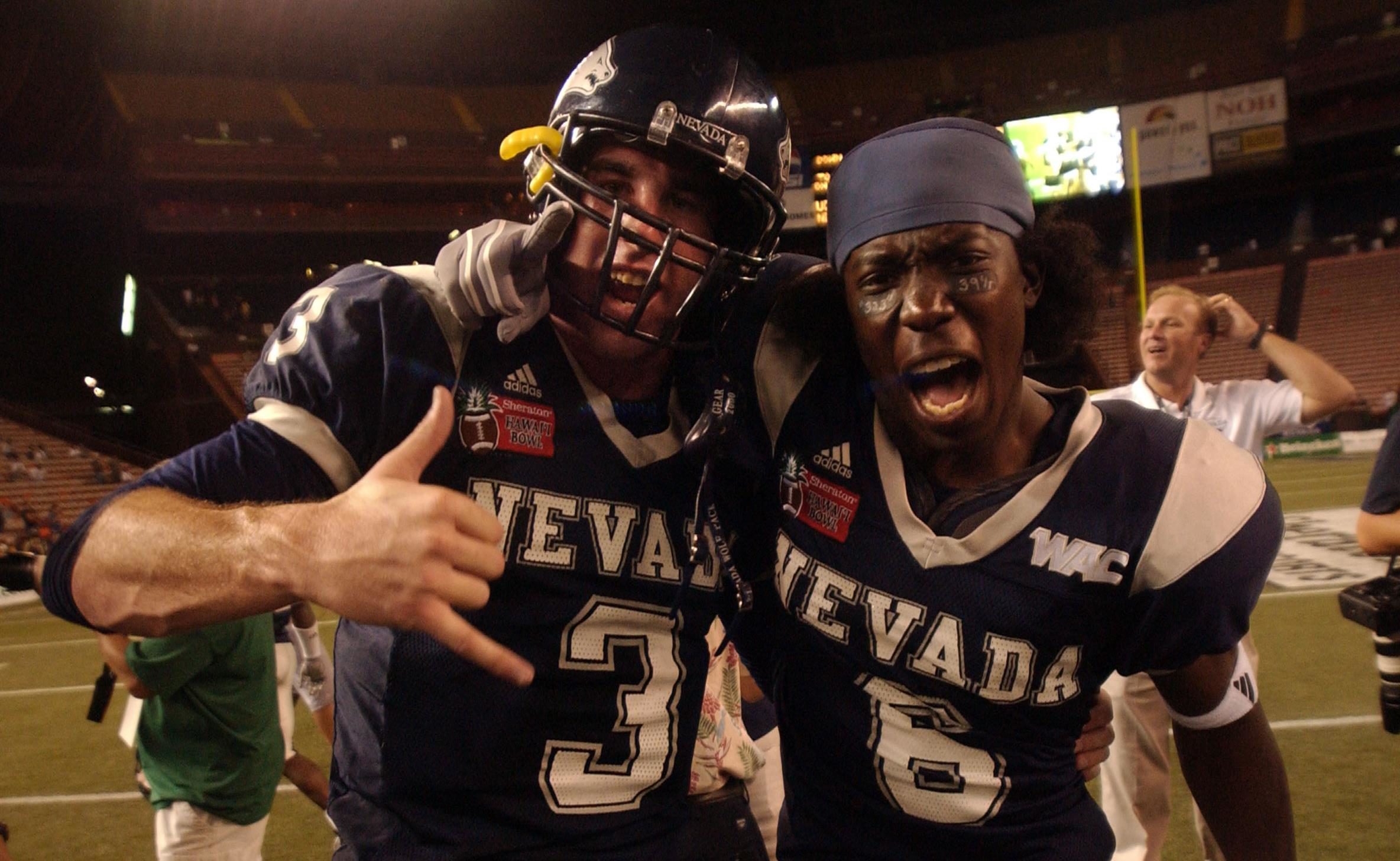 Nevada and overtime in bowl games have a unique history. The Wolf Pack lost to Toledo in the 1995 Las Vegas Bowl — the first ever FBS overtime game.

On this day 15 years ago, Nevada’s overtime fortunes changed. The Wolf Pack used a missed UCF extra point to slip past the Knights in a crazy Hawaii Bowl, 49-48.

It was a battle of 8-win conference runners-up for the Hawaii Bowl on Dec. 24, 2005. UCF was 8-4 and coming off a loss to Tulsa in the Conference USA Championship. The Knights were playing in a bowl game for the first time ever.

Nevada was 8-3 and in a bowl for the first time in nine years. The Wolf Pack finished tied atop the WAC standings, but lost the head-to-head match-up with co-champion Boise State. As time ticked away late in Honolulu, Nevada seemed in command.

With just over three minutes to play in regulation, Nevada looked to have put the contest away. Jeff Rowe’s touchdown pass to Travis Branzell gave the Wolf Pack a 42-32 lead and seemingly shut the door on UCF’s hopes.

The Knights however, would not go quietly. After Matt Prater’s 45-yard field goal made it a 1-score game, UCF recovered the ensuing onside kick. It took just four plays to reach the end zone as quarterback Steven Moffett’s third touchdown pass to Brandon Marshall with 55 seconds left tied the game, 42-42.

Nevada was content with playing overtime. The Wolf Pack would get the ball first.

After a big completion to Anthony Pudewell on third down kept the drive alive, Rowe’s 9-yard touchdown run put the Wolf Pack back in front. The PAT gave Nevada a 49-42 lead. It took two plays for UCF to answer with a touchdown of its own.

Running back Kevin Smith’s 20-yard touchdown run was his third of the day and put him at 202 rushing yards for the afternoon. A second overtime seemed like a forgone conclusion, but that was not to be.

Prater’s extra point attempt sailed to the right. For the first time in nine years, Nevada had won a bowl game.

In its first bowl ever, UCF wasted little time making it presence felt. After Moffett’s 52-yard touchdown pass to Marshall got the scoring started, Smith’s 78-yard touchdown run gave the Knights a 14-0 lead. Moffett passed for 301 yards with 11 of his 19 completions going to Marshall for 210 yards.

Following the hot start for UCF, 28 of the next 31 points would belong to Nevada. BJ Mitchell and Robert Hubbard each rushed for a pair of touchdowns to push the lead to 28-17. Those two combined for 304 yards rushing and five scores on a day where Nevada racked up 369 yards rushing and 623 yards of offense.

UCF responded with 15 straight points. After Prater’s 38-yard field goal cut the lead to eight at halftime, Moffett and Marshall hooked up for 31-yard score. Smith’s 3-yard touchdown late in the third quarter gave the Knights a 32-28 lead entering the final quarter.

The fourth quarter was less than two minutes old when Hubbard scored from five yards out. Rowe finished with 254 yards passing and 65 more rushing in the win.

In the second season of the second stint under head coach Chris Ault, Nevada tied a school record with its ninth win of the season. The Hawaii Bowl appearance begun an active stretch of 13 bowl appearances in 16 years after the 9-year hiatus.

It would be five years later before UCF finally won its first bowl game, but since then, the Knights have gone on to win BCS and New Year’s Six bowls. Entering the 2020 campaign, UCF had finished ranked in each of the previous three seasons.

As for Prater, he’s gone on to spend 14 years in the NFL. He has made two Pro Bowls and broke the NFL record for longest field goal as a member of the Denver Broncos in 2013. His last kick at UCF however, left much to be desired. It came on this day 15 years ago.